Megan McArdle alerts me today to a story from a local TV station that answers a question I’ve vaguely wondered about for a while: Why is it cheaper to buy a cooked and seasoned rotisserie chicken than a raw chicken? Cat Vesko provides the straight dope:

….In most cases, preparing meals from scratch is significantly cheaper than buying them pre-made. What makes rotisserie chickens the exception? The answer lies in the curious economics of the full-service supermarket….Much like hunters who strive to use every part of the animal, grocery stores attempt to sell every modicum of fresh food they stock. Produce past its prime is chopped up for the salad bar; meat that’s overdue for sale is cooked up and sold hot. Some mega-grocers like Costco have dedicated rotisserie 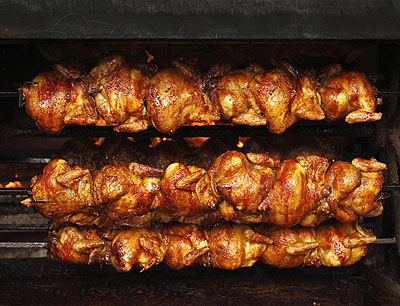 chicken programs, but employees report that standard supermarkets routinely pop unsold chickens from the butcher into the ol’ rotisserie oven.

This is a curiously roundabout explanation, but it boils down to this: whole chickens that are about to reach their sell-by date—and be thrown out—are instead taken to the deli to be cooked up. The grocery store doesn’t make as much money as it would selling the chicken fresh, but it makes more money than it would by throwing it out.

I guess this makes sense. Except for one thing: the number of rotisserie chickens in your average supermarket is huge. As near as I can tell, the number being roasted in any single hour is greater than the total number of raw whole chickens in the entire poultry section. In other words, there’s just no way that supermarkets toss out (or come close to tossing out) enough whole raw chickens to account for the vast pile of rotisserie chickens on offer. An awful lot of these chickens must have been purchased explicitly for the rotisserie. At least, that’s what my informal eyeball estimate tells me.

What’s more, the availability of all those cheap rotisserie chickens is a conspicuous incentive to stop buying whole raw chickens in the first place, and supermarkets obviously know this. This is one of the reasons most supermarkets stock so few whole chickens these days.1 So selling rotisserie chickens cheaply is just cutting their own throats. Why would they do that and lose money on the chicken?

So there must be something else going on. I’m not sure what, but I suspect there’s more to the story than just using up chickens that are approaching their sell-by date. Do I have any readers who work in supermarkets and can enlighten us?

1Not the only reason, or even the main reason, of course. The main reason is that most of us just don’t want to bother cooking a whole chicken these days.

UPDATE: The most popular guess in comments is that rotisserie chickens are a loss leader. Sure, you lose a dollar or two on each one, but you make up for it with the cole slaw and 2-liter sodas and so forth that everyone buys to go with them.

This is the most obvious explanation, and I’m totally willing to buy it. I just want to know if it’s true. Not a guess, but a confirmation from someone who actually knows if this is what’s going on. Anyone?