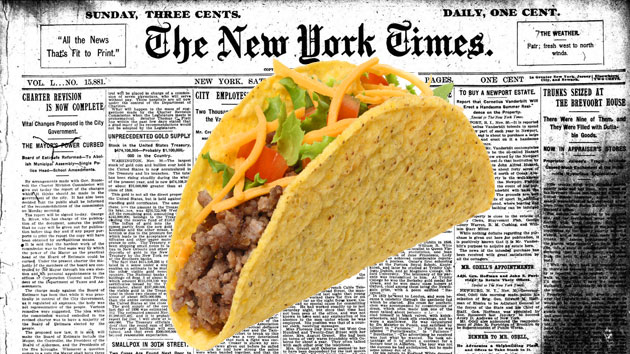 Neil Irwin does a bit of interesting gastronomic sleuthing today using a New York Times tool that counts the number of mentions of a word in the archives of the Times. The question is, how fast do new food trends go mainstream? Take, for example, fried calamari:

Now, of course, every strip-mall pizza place and suburban Applebee’s serves fried calamari. But not all that long ago it was an exotic food. The term “fried calamari” did not appear in the pages of The New York Times until 1975, according to our nifty Times Chronicle tool, and didn’t show up frequently until the 1980s. Lest you think it is only a change in vocabulary, the term “fried squid” made only a couple of scattered appearances before that time.

Fried calamari made a voyage that dozens of foods have made over the years: They start out being served in forward-thinking, innovative restaurants in New York and other capitals of gastronomy. Over time, they become more and more mainstream….In the last decade alone, the list includes tuna tartare, braised short ribs, beet salad and pretty much any dish involving pork belly, brussels sprouts or kale. In an earlier era, the list might include sun-dried tomatoes, pesto and hummus.

Fascinating! But readers with long memories will recall that I was surprised at how recently tacos became mainstream. In 1952 they were apparently uncommon enough that the Times had to explain to its readers what a taco was. So how about if we use this nifty new search tool to get some hard data on taco references? Here it is:

Sure enough, there are virtually no mentions of tacos in the 40s and 50s. There’s a blip here and there, but they don’t really get commonly mentioned until the 70s.

But that’s not what’s interesting. Back in 1877, a full 3 percent of all Times articles mentioned tacos! In fact, tacomania was a feature of the Times during all of the 1870s and 1880s, before suddenly falling off a cliff in 1890. What’s up with that? Why did tacos suddenly become verboten in 1890? Did a new editor take over who hated tacos? And what’s the deal with the blip from about 1917 to 1922? Did World War I produce a sudden explosion of interest in tacos?

This is very weird. Does anyone have a clue what’s going on here?

UPDATE: On Twitter, Christopher Ingraham suggests that this is an artifact of bad text recognition of ancient microfilm. I don’t have access to the full version of Times Chronicle, but a look at some of the summaries of articles that allegedly mention tacos makes this seem like a pretty good guess. It’s quite possible that there are no genuine mentions of tacos until the 40s or 50s.

This is a sadly boring explanation, but it seems pretty likely to be right. However, I’m still curious about the sudden dropoff in 1890 (did archive copies suddenly improve? did the Times start using a different font?) and the blip after World War I.