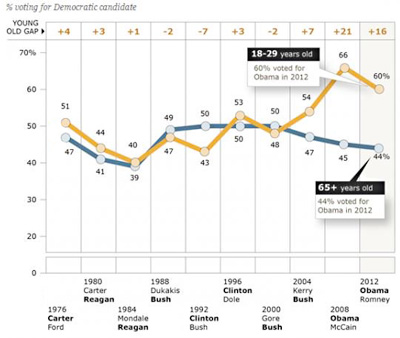 This is nothing new, but I continue to find it sort of fascinating. Here’s Pew’s breakdown of the voting generation gap over the past 40 years:

At the turn of the century, there was no partisan difference in the votes of young and old. But in recent elections, there has been a huge generation gap at the polls. Today 92% of Republicans are to the right of the median Democrat in their core social, economic and political views, while 94% of Democrats are to the left of the median Republican, up from 64% and 70% respectively in 1994.

There’s more at the link. Approval ratings of presidents are now based almost entirely on party affiliation. Liberals and conservatives get their news from entirely different places. And they just flatly disapprove of each other more than ever.

And it apparently all started with George Bush. Even during the Clinton wars of the 90s, the gaps weren’t that big. Only after Bush was elected—and the Republican Party became thoroughly Rove-ized—did all these trends really pick up steam. Thanks Karl!