Was Rex Tillerson a good CEO at Exxon? Over at Bloomberg, Vincent Piazza says Tillerson has two big claims to fame:

Number one, it’s the relationship with Russia and the expanding relationship there as well. But also the recent acquisition of XTO back in 2010. That was a major bet on natural gas that did not pan out—a $35 billion bet on natural 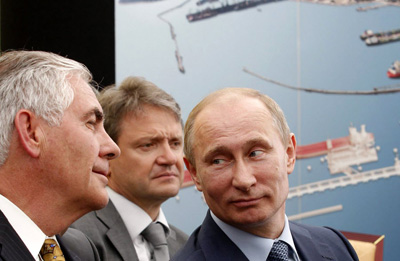 gas that seemed to turn the other way on them.

So…a lousy acquisition and, um, Russia. The Wall Street Journal goes into more detail on that:

“I have a very close relationship with [Mr. Putin],” Mr. Tillerson told students at the University of Texas, his alma mater, in February….He was successful, in part because he negotiated with Mr. Putin, who became Russian prime minister in 1999 and has run the country, either as president or prime minister, ever since. Mr. Tillerson’s ties helped him catapult past other executives to lead the company in 2006.

….At a June 2012 meeting with Mr. Putin, Mr. Tillerson said Exxon’s Arctic deal enhanced U.S.-Russian ties. “I agree, as you point out, that nothing strengthens relationships between countries better than business enterprise,” a Kremlin transcript quoted him as saying. The next year, Mr. Putin awarded him Russia’s Order of Friendship for his work.

Well, OK then. He’s chummy with Vladimir Putin and he blew $35 billion on a bad acquisition. But at least he’s a great businessman, right? Here is ExxonMobil’s performance over the past decade:

But at least they paid dividends regularly! Sounds like Secretary of State material to me.