Two days after promising that he will be “leaving” his businesses, which will henceforth be run by Eric and Don Jr., Donald Trump held a “private” get-together with various leaders of Silicon Valley firms, presumably to discuss his plans as president. Neither the assembled CEOs nor Trump 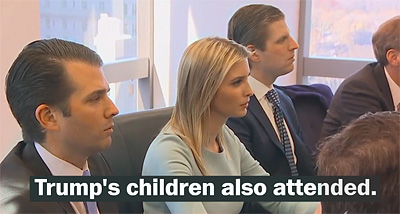 revealed what they had talked about, but there were a couple of outside business executives who got a detailed briefing: his children.

It’s just corruption all the way down and Trump doesn’t care who knows it. Most presidents would at least do stuff like this on the sly, via telephone calls or personal visits. But Trump invites his kids to meetings and then brings in the cameras to make sure everyone knows they’re there. He knows there’s nothing we can do about it, and nothing that Republicans in Congress will do about it, so he figures he can just thumb his nose at the entire country. I guess he’s right.