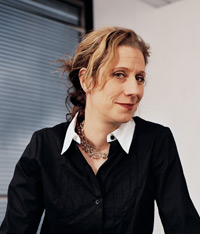 Having co-created Comedy Central’s The Daily Show, Lizz Winstead is now trying to transform the political landscape of talk radio. As comedy czar of Air America Radio—the national liberal network backed by former AOL executive Mark Walsh—and co-host (with rapper Chuck D) of her own three-hour daily show, Winstead aims to provide a satirical alternative to the reactionary bombast of Rush and his ilk.

Kurt Andersen: So on the spectrum of journalism to topical comedy, between, say, ABC News and The Daily Show, where does Air America sit?

Lizz Winstead: There will be information, but the hosts will feel free to be witty, and there will be a few 90-second comedy pieces each hour. So you come for the news and stay to hear the satirical response to it.

KA: Which is sort of the opposite of The Daily Show, where you come for the entertainment but you get, shockingly enough, your information.

LW: Yes, that’s exactly right. It would be like if you watch Brokaw, skipped past all the sitcoms, and went directly to The Daily Show.

KA: Is your raw material the same stuff that the rest of radio is talking about?

LW: Maybe, but we may take a New York Times A18 story and make that our lead. When Halliburton has a contract, the story to me is: Six in ten Iraqis are out of work and they’re actually going to use South Asian labor to increase their profit margin? Are you telling me there’s a union somewhere in Iraq that’s going to bilk an extra five cents an hour? What’s the purpose of driving the hatred home?

KA: When a Justin Timberlake and Janet Jackson thing happens, will you talk about it? Or will you purely be Halliburton and Iraq?

LW: We will, [but] we might take less of a Howard Stern approach and try to break down why people are reacting the way they are and why, for God’s sakes, the media is leading with it. Really: Is a society that embraces America’s Funniest Home Videos so outraged that they saw a woman’s breast? Or are they outraged because the woman is just too old to show her breast, because nobody wants to see the breast of anyone over the age of…I think 30 is the cutoff?

KA: To have all of these modules of news comedy, that’s a daunting prospect. Comedy can go wrong in a bigger way and make somebody turn the dial faster than just talk.

LW: We’re never going to do some gigantic six-minute sketch. And the comedy is going to have a purpose. That way I think people won’t tune out. You’ve got to be a little bit fearless and say, “This whole venture is a risk,” because no one’s ever done anything this kooky before.

KA: Is the plan to make money, lose money?

KA: Not just from Ben and Jerry’s ads.

LW: And not just from Ben and Jerry’s ads. Honestly, 50 percent of the country did not vote for the sweeping right-wing agenda that came down. And those people buy beer, and they buy soap and they buy cars. And I think the right will listen, too, for the same reason the left listens to Rush, and they’re going to be able to make fun of us and call us names. Good. That means we’re on point. You might hate us at the end of the day, but at least you have another point of reference with which to make your decision.

KA: Speaking of The Daily Show, I’m always impressed by how comfortably Jon Stewart interviews Kissinger or even Richard Perle.

KA: On Air America, would you give a pass to Al Sharpton?

LW: I don’t think so. [But] that’s a different case, because you make a decision based on Tawana Brawley, and that’s a tired story.

LW: I think that illegal bombings and massacres have more weight.

KA: So did that disappoint you, when Jon Stewart was nice to Kissinger?

LW: I don’t mean that you would necessarily need to grill Kissinger. But to let it go.…

KA: So you should jokingly say, “Say, Dr. Kissinger, what about those 2 million dead Cambodians…?”

LW: Exactly! As a way to say something. To me, it seems like the elephant in the room.

KA: When you are talking to job candidates, what is the acceptable breadth of ideology?

LW: The breadth of ideology is that you have to have an opinion, and you have to agree with the concept that if you’re listening to nothing but the Rush Limbaughs and Fox Newses, you are not getting a complete version of your world.

KA: But I’m not sure a whole lot of people really want The Nation magazine of the air—

KA: So the way that Fox News has Alan Colmes as its house liberal, will you have a house conservative?

LW: We’ll have conservatives on as guests. But I don’t think we need a house conservative. I mean, Alan Colmes is really a sorry excuse; he’s like the old tattered prom dress of liberals.

KA: So, say, John Kerry becomes president. Is that bad for Air America?

LW: There’re still a whole lot of horrible senators, corporations, international leaders, and Supreme Court justices. The Democratic Party? I don’t even know what it is anymore. And so, John Kerry winning? He gave away the farm on so much that there’s a lot to fix. He supposedly wants to give the party back its spine. It needs a spine again.

KA: Does a “spine” now necessarily mean a spine over on the left? A spine could also mean “By God, we’re against partial-birth abortion.” A Lieberman spine?

LW: I don’t know—a Lieberman spine? [Laughs.] I don’t know why Lieberman’s a Democrat. I’ve never quite figured that out.

KA: Why didn’t liberal talk radio grow up organically, instead of having to be done in this massive, top-down way?

LW: I don’t know, but I think you need to do a wall of sound because you can’t just have one liberal show on these [conservative talk] empires. It’s like you go to one of those T.J. Maxx-y kind of stores and you know there’s a pair of Prada shoes there, but you just aren’t going to dig for ’em.

KA: Which existing radio audiences do you think your audience will be composed of?

KA: When my kids were little and I drove them to school, we would listen to public radio, and then they’d get out and I’d turn to Howard Stern.

LW: Well, that’s the whole thing! We listen to Howard Stern and public radio. [But with] NPR, there’s always that nine-minute story about the goat-cheese farm you tune out. We’re going to try to avoid that kind of aw-shucksy folksiness.

KA: MSNBC fired Michael Savage after he told a gay caller, “You should get AIDS and die, you pig.” Can you imagine having your own far-left Savage who goes over the line?

LW: You never know where the line is until you go over it, and you can’t be funny unless you get near it. You cannot be in the business of opinion giving and entertainment and satire if you’re going to constantly worry if you’re crossing the line.

KA: But you’re live! On my radio show I was recently interviewing a major cultural figure who suddenly launched into this outrageous, libelous, undoubtedly apocryphal story about President Bush. And I was thinking, “Thank God this is taped.”

LW: That’s why we’re pairing up satirists with people who are more journalistically trained, so one person can say, “That sounds a little nuts.” We want people to be thoughtful in their humor and in their commentary, not have it be remedial comedy hour, remedial punditry hour. It’s really boring to say, “George Bush is Hitler.” I am like, “Oh, shut up. Are you really that unoriginal?” [Pause.] Besides, he’s so much worse.

KA: Note to readers: That was a joke.