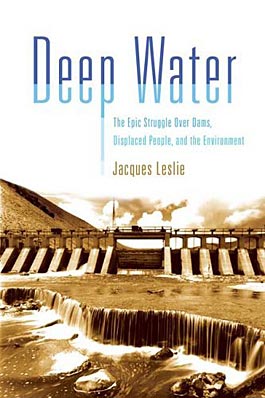 For the past 70 years, the world has been on a dam-building spree, putting up 45,000 large dams at a cost of $2 trillion. Despite the awe they’ve inspired, the electricity generated, the deserts irrigated, most dams have come with huge environmental and human costs. In Deep Water, Jacques Leslie takes a thoughtful look at the ambivalent legacy of the rush to plug the world’s rivers and asks whether there can be such a thing as a “good dam.”

Leslie surveys dam projects from Australia to Zambia in a piece of meticulously researched globe-trotting. In his most compelling episode, he profiles Medha Patkar, an activist fighting India’s plan to build 30 large dams along the Narmada River. When Leslie meets her, Patkar has just tried unsuccessfully—again—to drown herself in the rising res-ervoir waters. Though such tactics illustrate how maddeningly futile it can be to stop a dam’s construction once it’s under way, Leslie credits anti-dam activists with slowing the pace of dam building. Even the World Bank, which has rarely met a dam it didn’t like, is starting to realize that not all dams are cost-effective or necessary.

Leslie’s no fan of big dams—he calls them “loaded weapons aimed down rivers”—but he’s not advocating monkeywrenching Glen Canyon. He believes that dams’ ultimate undoing will be the very hubris they’re built on. Dams aren’t forever: They silt up and outlive their intended purposes. One day, he predicts, these giant concrete slabs may be seen as “relics of the twentieth century, like Stalinism and gasoline-powered cars…reminders of an ancient time when humans believed they could vanquish nature.”