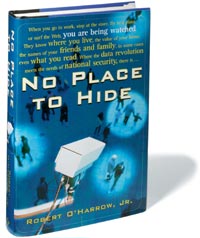 In his 1961 farewell address, President Dwight D. Eisenhower famously warned that the government agencies and defense contractors tasked with keeping America safe from communism could themselves become a threat to the American way of life. “We must never,” he urged, “let the weight of this combination endanger our liberties or democratic process…. Only an alert and knowledgeable citizenry can compel the proper meshing of the huge industrial and military machinery of defense with our peaceful methods and goals, so that security and liberty may prosper together.”

This theme is at the center of Robert O’Harrow’s provocative book, No Place to Hide. Since September 11, O’Harrow argues, patriotism and profit motive have fortuitously converged to create a “security-industrial complex” that seeks to electronically monitor our every move. Like its Cold War-era predecessor, this alarming construct is propelled by fear and weds the private and public sectors in unsettling ways. The departments of Justice and Homeland Security have replaced the Pentagon, while little-known high-technology firms like Seisint, Acxiom, and ChoicePoint have assumed the role once played by traditional weapons manufacturers.

This secretive new alliance could, if left unchecked, irrevocably alter our notions of freedom. It will make many Americans nervous, and a lucky few rich, but whether it will actually thwart terrorism remains to be seen.

No Place to Hide illuminates the government’s effort to break down the walls between commercial and public data to compile astonishingly detailed files on virtually every adult American. For nearly a decade, marketers have been collecting the electronic footprints we leave as we consume our way through the modern world; they know what politicians we give money to, what prescriptions we fill, and what sex toys we buy from mail-order catalogs. Now the government knows, too. But it insists it can use this information to ferret out terrorists.

O’Harrow, a reporter for the Washington Post, makes his case without the hysterics that have accompanied many recent tracts on the balance between security and privacy. As he takes pains to note, the brains behind the security-industrial complex are not setting out to create an Orwellian state, but rather to use cutting-edge technology to track down murderous extremists.

Unfortunately, for all their ingenuity, these bureaucrats and entrepreneurs are not very adept at proving that they are working in our best interests. This is best illustrated by the Pentagon’s infamous Total Information Awareness (TIA) program. Developed under the direction of Admiral John Poindexter, the Iran-Contra conspirator, TIA would have used the military’s most advanced eavesdropping capabilities to automatically monitor everyone’s emails, online purchases, and phone, financial, and medical records. The public furor that surrounded TIA’s rollout ultimately forced Congress to pull the plug.

Concerns about the growing surveillance state are not unfounded. As O’Harrow notes, the technology on which we are increasingly reliant is not always so reliable. He tells Kafkaesque tales of individuals mistakenly put on terror watch-lists and their frustrating efforts to get off them. He also highlights the case of Brandon Mayfield, the Oregon attorney whose life was turned upside down after the FBI’s Automated Fingerprint Identification System falsely linked him to the March 2004 Madrid bombings. That Mayfield was a Muslim convert highlights how the combination of old-fashioned prejudices and newfangled technology can lead to poor police work. Data collection can also be a double-edged sword: If law enforcement agencies are tripping all over themselves to acquire it, so too are terrorists, who use credit card fraud as an important source of income.

O’Harrow warns that the exponential growth of computing capacity, to say nothing of the government’s insatiable appetite for information, means that data mining is likely to balloon in the coming years. Federal agencies already have nearly 200 projects in the works, 36 of which use personal information purchased from private companies. What’s more, company executives have helped write what little legislation governs the industry, and firms such as Acxiom have counseled the government on how to field public concerns about privacy. And while it remains unclear whether any of their technologies have helped protect us from terrorist attack, we do know that they have made it possible for police officers to screen their dates and track down estranged wives, as well as enabled the Denver police to keep files on more than 3,200 people, including anti-police-brutality activists.

As No Place to Hide ominously concludes, the “alert and knowledgeable citizenry” on which Ike pinned his hopes 40 years ago still has its work cut out for it. Public outcry has stymied invasive programs like TIA, but dozens of other federal surveillance efforts — such as the Joint Regional Information Exchange System — are already under way. As Jeff Jonas, a software developer who advised Poindexter, tells O’Harrow, “Once you surface an idea and it is a good one, very little can be done to stop it.” Sure enough, even TIA still has a pulse: Congress left a loophole allowing its use on foreign nationals in the United States. With the flip of a switch, it can start monitoring citizens’ emails as well.