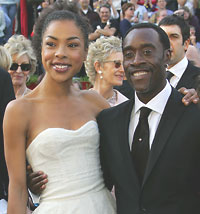 One of the biggest success stories of this year’s Oscars was a movie that didn’t win anything. Hotel Rwanda, a bleak, harrowing film about mass slaughter and the moral failure of the West, picked up three nominations — for best actor, supporting actress, and screenplay; pretty good going for a limited-release movie about that almost didn’t get made for lack of funds. An Oscar wouldn’t have hurt, of course, but the nominations alone vastly increased the film’s visibility — and, crucially, that of its subject, the 1994 Rwandan genocide.

The ambitions of Hotel Rwanda, which tells the true story of Paul Rusesabagina, a Hutu (played by Don Cheadle) who saves the lives of more than a thousand Tutsis by sheltering them at the high-class hotel he manages, are quite explicit. Director Terry George has said, “Politicians from around the world have made the pilgrimage to Rwanda to ask for forgiveness from the survivors” and to promise they will stop genocide in the future. “But it’s happening yet again in Sudan, or the Congo, or some [other] place where life is worth less than dirt.”

Hotel Rwanda is an act of memory against forgetting, a reminder to the world — from presidents and policy makers to ordinary people in front of their TVs–that it turned away as 800,000 people were butchered, in plain sight, in 100 days.
(There’s a quiet but telling moment in the film where an American photojournalist, on viewing film footage of a massacre, sadly observes, ” “people will see it, say ‘Oh, that’s awful,’ and go back to their dinners.” And so it proved.) And it’s a summons to act now — to give meaning to the words “Never again.”

Even before the Oscar nominations, the film had generated a great deal of public and private interest, thanks in large part to a publicity team comprising, in addition to PR types, humanitarian organizations and nonprofits dedicated to grassroots change. Amnesty International has had the largest hand in advocating for Hotel Rwanda, its effort spearheaded by Bonnie Abaunza, the director of Artists for Amnesty, a program that, as the name suggests, promotes Amnesty’s work through the arts.

When she first heard about Hotel Rwanda, Abaunza approached MGM/United Artists with a proposal: Amnesty would mobilize its membership to promote the film; the film, in turn, would help generate interest and contributions for Amnesty’s biggest current campaign: the fight for humanitaritan relief and international action in Darfur, Sudan, where an ethnic cleansing campaign has caused tens of thousands of deaths and made refugees of more than 1.8 million people. The UN has called the conflict the worst humanitarian crisis in the world; millions are expected to die of hunger and disease anyway. Although response to Sudan has been better than response to the Rwandan genocide, says Abaunza, it still falls short of what is needed.

Emphasizing the similarities between the two crises, Amnesty has launched a far-reaching publicity campaign, mobilizing members not only to see the film but to get everyone they know to the theater.

Star power, too, has been pressed into service on behalf of the film. At the Los Angeles premiere, sponsored by Amnesty, co-hosts Angelina Jolie and Harrison Ford called attention to the conflict in Darfur, reiterating the film’s underlying message: “We didn’t stop it ten years ago, we have to stop it now.” A single photo of the stars at the premier that ran that week in People magazine ended up drawing hundreds of calls and donations. In all, the event drew in over $25,000 for Amnesty’s work in Darfur.

With an eye to the future, Amnesty has made a point of reaching out to a younger demographic, sponsoring screenings at colleges across the country, from Idaho State to Harvard. In November, the film screened at an academic conference on African-American and African studies. Targeting these educators is crucial, says Abaunza, as they will bring Hotel Rwanda’s message into the classroom.

George and the head of Amnesty’s Human Rights Education Program also developed a teaching guide that high-school teachers can use in conjunction with the film to help students understand and analyze the Rwandan genocide. The guide helps teachers relate the lessons of the film to contemporary conflicts like Sudan, and uses Rusesabagina’s story to emphasize the importance of individual action.

In an effort to keep that message fresh, MGM and Amnesty recently filmed six public service announcements that aired on MTV’s college channel, mtvU, in late February. In the PSAs, Don Cheadle, Nick Nolte, Paul Rusesabagina, Wyclef Jean and Director Terry George appeal to the global community (and particularly its young audience) to help end the genocide in Sudan.

“There’s nothing more effective than the energy of youth,” she says. Abaunza knows — or at least hopes — that, if she returns to students six months after they saw Hotel Rwanda and reminds them that the killing in Darfur has not stopped, they will be ready and willing to help.

Publicity efforts have also been targeted at policy makers. In mid-December, the film was shown at the US State Department. The Open Forum, a state department committee that brings alternative policy recommendations to the Secretary of State, hosted the event. The movie screened for 600 current and former state employees; some had been intimately involved in making policy decisions about Rwanda and are currently involved in decisions on Sudan.

Joyce Leader, who was second in command at the US Embassy in Rwanda, was also in the audience. Leader says the film brought back powerful memories: “It left me shaking and shaking.” Particular scenes resonated with her own experiences in Rwanda, notably the shots of militia and other Hutus who would later kill thousands of their countrymen, crowding the streets.

As Leader left Kigali in a convoy in 1994 (the U.S. evacuated all Americans when the genocide began), she remembers looking down from her truck at soldiers waving machetes and guns.

An additional screening at the Holocaust museum in Washington, D.C. offered congressional representatives, ambassadors and diplomats an opportunity to see the film before it was released. House Representative Ed Royce, who chairs the Africa subcommittee, and congressman Donald Payne, even sent a letter to every member of the Congress, encouraging them to attend the screening. In his letter, Royce emphasized the connection between Rwanda and the current genocide in Darfur. “Protection of human lives is paramount,” he wrote, “and lives can be saved.”

Stanislass Kamanzi, the Ambassador of Rwanda to the United Nations, saw the film at another screening in New York, co-hosted by the United Nations Refugee Agency. He was one of the few Rwandan refugees in attendance.

Kamanzi was moved to tears as the film led him through many of the emotions he felt at the time of the genocide. “It is a matter of miracle that I am alive today,” he says softly. When the killing began, Kamanzi and his family fled to a Southern province of Rwanda that offered relative safety. Before they left, they spent a night at the Hotel Mille Collines — the hotel where Paul Rusesabagina’s sheltered the Tutsis.

I asked Kamanzi whether he thinks a movie like Hotel Rwanda can change the way the international community deals with situations like Rwanda. “The movie is very important,” he said, “because it can raise awareness and communicate that genocide can happen no longer.”