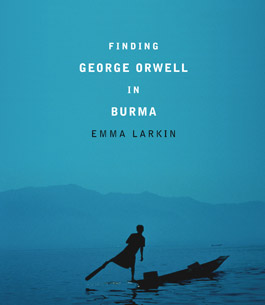 In 1950, George Orwell started work on a sequel to his novel Burmese Days, based on his stint as an imperial administrator in Mandalay. He got only three pages into the new story before he died of tuberculosis. In Finding George Orwell in Burma, journalist Emma Larkin takes up this unfinished task, trying to decode the country with the help of the author who is known by some Burmese simply as “the prophet.”

In the pseudonymous Larkin, the secretive Burmese dictatorship has found its perfect foreign narrator. All we know for sure about her is that she is an American who was born and raised in Asia, is based in Bangkok, and speaks fluent Burmese. She heads to Burma in the mid-1990s, as it endures a severe crackdown on its pro-democracy movement. With intelligence men close behind, she travels from Rangoon to Orwell’s old up-country post and points beyond, meeting with intellectuals, shopkeepers, and hoteliers, who also must take assumed names for their own protection.

What Larkin discovers is, well, Orwellian. Describing the junta, she writes, “The grand plan, if there is a plan at all, is to abolish the power of thinking.” In Mandalay she finds a George Orwell book club debating the author’s legacy. Not surprisingly, 1984 is banned there, but a book collector digs up an old copy of Animal Farm, calling it “a very Burmese book…. Because it is about pigs and dogs ruling the country!”

Though she faces greater constraints than Orwell, and could have easily fictionalized her experience, as he did, Larkin sticks to the facts. The result is one of the most unusual travelogues to come out of Southeast Asia in some time, and a truer picture of authoritarianism than anyone has written since, perhaps, Orwell himself.