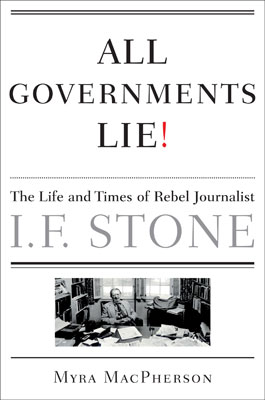 There’s never been another journalist quite like I.F. Stone. He got his start as a newspaper reporter and editorialist in Philadelphia and New York City in the 1920s but received little attention until the early 1950s, when he launched a four-page political newsletter with the unadorned name I.F. Stone’s Weekly. (Born Isador Feinstein, he’d adopted the surname Stone in 1937 to evade his anti-Semitic critics.) The Weekly survived until 1972, earning “Izzy” powerful admirers and detractors, as well as less influential readers who knew they could learn something fresh from his painstaking reporting informed by a politically progressive sensibility. Unhindered by “on the one hand, on the other hand” pseudo-objectivity, the Weekly made its reputation by outing government and corporate liars, frequently relying on documents that other journalists had overlooked. Stone’s gutsy, relentless reporting played a role in ending Senator Joseph McCarthy’s reign of anticommunist terror, and information he uncovered about Richard Nixon’s paranoia helped Washington insiders and outsiders alike realize that the president’s decisions were based on something other than logic. Though Stone refined many of the techniques used by contemporary investigative reporters, it was his love of troublemaking and “hound-dog tenacity,” as Myra MacPherson puts it, that truly set him apart from his colleagues. “He simply didn’t give a damn if he was an outcast.”

MacPherson got to know Stone before his death in 1989 and received cooperation from many of his relatives and friends in writing this sweeping biography. All Governments Lie! skillfully covers not just the details of Stone’s life but also how his career fit into the evolution of alternative journalism. Its chapter about Stone’s role at the innovative but short-lived 1940s tabloid PM is especially insightful.

Stone admonished his fellow muckrakers, “If you want to know about governments, all you have to know is two words, ‘governments lie.'” Exposing official deceptions was Stone’s greatest legacy, but there was an important flip side to his skepticism. Stone, MacPherson writes, “never stopped praising the American freedoms that allowed him to speak and to think as he did. That is why he fought so hard against those who were bent on tarnishing them.”