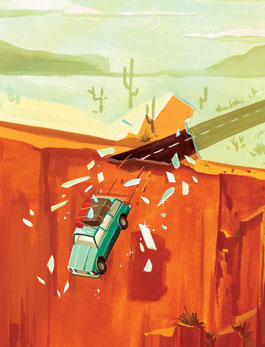 Cross Country: Fifteen Years and 90,000 Miles on the Roads and Interstates of America With Lewis and Clark, a Lot of Bad Motels, a Moving Van, Emily Post, Jack Kerouac, My Wife, My Mother-in-Law, Two Kids, and Enough Coffee to Kill an Elephant
By Robert Sullivan. Bloomsbury. 389 pages. $24.95.

America abhors a vacuum. After doubling its size with the Louisiana Purchase, the country looked across the Mississippi at its new, other half and, having just finished hewing a gentlemanly republic from the eastern forests, went to work again. Lewis and Clark slogged to Oregon and back, eating dog meat and sketching maps. Settlers came lumbering over the plains and out of the Nevada desert with their livestock bleeding from the mouth. Wagon trains were lowered over the Sierras with ropes and winches. Railroads were laid. Things deemed in the way—bison, Native Americans—were decimated. “The land,” as Robert Frost once described it, “vaguely realizing westward, but still unstoried, artless, unenhanced,” was being storied and enhanced by the simple act of our crossing it.

Then came the cars. In 1903, a Vermont doctor won a $50 bet by traversing the United States in an automobile—notwithstanding that there were barely 200 miles of roads suitable for such a machine. Six years later, a 23-year-old woman drove west as a publicity stunt to sell more cars. But by the end of World War I, cars were virtually selling themselves. America loved driving and needed somewhere to do it. So we spent much of the first half of the 20th century like Lilliputians cinching Gulliver, taking possession of our landscape by strapping it down with crisscrossing highways. By the 1930s, the Office of Public Roads, looking to Hitler’s autobahn for inspiration, was paving 12,000 miles a year. This enterprise culminated with the postwar federal interstate system, which, as President Eisenhower boasted, used enough concrete to lay six sidewalks to the moon. With this Manifest Destiny business just about finished, Eisenhower was, it seems, already looking desirously skyward toward the next frontier. But the rest of us—earthbound, road-bound—could only keep racing between the coasts like flies trapped in a long hallway. Since then, the everyman’s moon shot has been the cross-country drive.

Driving cross-country may be the only thing Americans do in which the journey is so explicitly more important than the destination. The road trip still offers a kind of pioneering adventure, particularly for those of us who live huddled against the coasts, as though in fear of the broad emptiness behind us—the spaces on the map we imagine to be emblazoned with ogres and dragons, the red states. We may know it as “flyover country,” but we are suddenly determined to drive smack into the heart of it. Like all rites, the cross-country road trip is not only a trial to endure but also an illumination, a way of knowing. In spite of our suspicion, we sense that out there is another America, and perhaps a more perfect one—”an America,” writes Robert Sullivan in his freewheeling new book, “that appears in magazines alongside recipes; it’s the America where presidential candidates are televised.”

Sullivan, the author of four other books, including a fine appreciation of vermin, Rats, has gassed up and streaked across the map more than two dozen times, often with his wife and kids in tow. Cross Country chronicles a family road trip last summer in a rented Chevy Impala but ends up, guided by the author’s rampant curiosity, as a gratifying miscellany of portraits, micro-histories, and minutiae—from the bicycle salesman who founded the Indy 500 to the evolution of coffee cup sip-tops. “In the roads of America,” Sullivan writes, “is the history of America.” His is “an American style of contemplating history” in which you not only “stand where before stood someone else” but also goad your children to read passages from Lewis and Clark’s journals aloud. Driving through Woody Guthrie’s home state of Oklahoma, Sullivan leads the whole car in singing “This Land Is Your Land,” then pops into a convenience store for a postcard listing the names and original territories of North American Indian tribes—and a Coke.

Moving through America, Sullivan finds a nation always in motion, where things are marketed, sold, and obliterated—gradually, or all at once—then rebuilt, renamed, or repurposed. In Oregon, he finds hatcheries built at the base of a dam, meant to repopulate the salmon that the dam killed off. In Montana, he plays golf on a converted toxic waste site. Often, these detours end up subtly showcasing the virtuosity—or at least the merciless vigor—with which America sells us its ideas, including the very idea of driving cross-country.

In 1905, a coalition of western politicians and businessmen calling themselves the America Firsters—as in “See Europe if you will, but see America first”—met to lure East Coast tourists, and their dollars, into “our throbbing West.” The country was coming of age and turning its mighty powers of marketing on itself. American identity was up for grabs—yet another intolerable vacuum—and driving west, it was believed, would help define it. According to one editorialist, patriotism would come from acquiring “a tonic knowledge of the physical thing called America,” the rugged lands beyond the elitist and effete cities of the east. Touring the country’s new national parks—where a machinist from Kansas and a real estate baron from Philadelphia might strike up a conversation—made “better citizens.” From the road, America would appear cohesive and interdependent despite its tremendous size, and majestic because of it. A 45-day cross-country drive in 1915 moved ?Emily Post in just this way. “The interminable distance was in itself an unforgettably wonderful experience,” she wrote. “It gave us an impression of the lavish immensity of our own country as nothing else could.”

The same salesmanship that helped put Americans on the roads would also lure us off them. Sullivan swiftly chronicles the arms race whereby roadside convenience stores added gas pumps and gas stations added convenience stores. By 1960, he writes, Holiday Inn was opening two new hotels a week, and such accommodations were often surreptitious showrooms, introducing us to state-of-the-art stuff like wall-to-wall carpeting and coffeemakers. Holiday Inn Express now advertises what it calls “arguably the best cinnamon roll this world has witnessed” and has outfitted its bathrooms with Kohler Stay Smart showerheads—both available for purchase on its website.

Meanwhile, roadside towns clamor to market whatever might make them look significant enough to stop at. Often they promise the contact high of history, as in the hot springs where Lewis and Clark once overnighted and to which Sullivan drags his family. (“I don’t want to go anywhere where Lewis and Clark were naked,” his 13-year-old son insists.) There are attractions and pseudo-attractions, as something—anything—can always be made out of nothing. As one North Dakotan booster puts it: “[I]f I said to my kids, ‘Well, we’re going to North Dakota to see the wide open spaces,’ they would probably say, ‘No way.’ But if I said we were going to North Dakota to see the world’s largest metal sculpture…” And so the Sullivans are treated to the scrap-metal Geese in Flight along Route 21. “Traveling the interstate,” Sullivan concludes, “is traveling through themes of marketing.”

The Great Plains have not been transformed entirely into an impenetrable strip mall, but for those of us lured cross-country by the promise of greater, more authentic things, all of this white noise can exacerbate our natural suspicions and anxieties about the “real America.” Sullivan spends a half hour in Fergus Falls, Minnesota, trying to find a diner that is suitably Minnesotan, then finally grabs a coffee at McDonald’s. And even Emily Post was cynical about the Native Americans she saw in New Mexico, noting that “only one wore the blanket costume as it is supposed to be worn.”

Our extravagant highways may nudge us toward jadedness, but Sullivan’s skill—as a writer and traveler—is delighting in whatever America offers him. Consider the Berkeley Pit Viewing Stand in Butte, Montana, an accidental attraction he and his wife have frequented on their many cross-country trips over the years: as lovers, as newlyweds, and now as parents. The Pit is a stupefying chasm, dug a mile wide and nearly as deep as the Empire State Building is tall. It was stripped for 290 million tons of copper and then abandoned, gradually devolving into a lake filled with arsenic, cobalt, cadmium, and other terrible things. “It is a darkness, an abyss,” Sullivan writes, “on which birds alight, and then die”—and a vista, we are led to imagine, to which the road-happy Sullivans have ceremoniously come to mark their years.

Cross Country leaves us with several strangely transcendental moments like these but with no robust epiphany at the end. Because what could the mildly ingenious architecture of median barriers or the fact that Evel Knievel once snubbed Sullivan’s son at a restaurant finally amount to? As his clan crosses the Hudson River and putters home, Sullivan quietly notes, “I can see that the modern American road is a common space where people share nothing. It is the thing that, while separating us, we all have in common.” It’s a paradoxical image of America, not unlike the Pit, that sounds strangely like some Buddhist conception of death. Which is to say, this land, despite the stupendous mess of haunted beauty, hyperbole, and kitsch we’ve been building on top of it, may still stretch defiantly ahead of us as a kind of vertiginous vacuum. It is a vacuum we’ve spent more than two centuries filling up with stuff. All it lacks now is meaning.