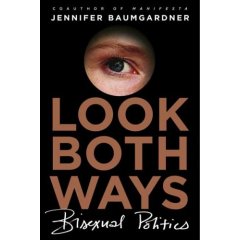 Americans tend to see bisexual women in one of two ways: Either they’re lesbians in denial, or they’re “lesbians until graduation” who sleep with women while they pursue gender studies degrees and then go back to dating men. In Look Both Ways, Jennifer Baumgardner challenges these stereotypes and makes the case that a huge number of women are attracted to and pursue significant relationships with members of both sexes. But because there is no bisexual movement to speak of, many women who date both women and men have a hard time figuring out what it means to be bisexual.

Bisexuality got widespread recognition in the early 1990s, when gay rights groups added the “b” to “lgbt” and Jill Sobule’s “I Kissed a Girl” was all over the radio. That’s when Baumgardner herself first went out with a woman, a coworker at Ms. magazine. She went on to date a man, then Amy Ray of the Indigo Girls, and finally another man, with whom she recently had a baby. Baumgardner mentions many women she’s known who have “looked both ways,” but she doesn’t stray too far beyond the stories of bisexual women who are feminist scholars, activists, or celebrities. She devotes a laudatory chapter to singer-songwriter Ani DiFranco, who felt she’d abandoned her lesbian fans when she married a man, and a section to Anne Heche, lovingly dubbed “The Bad Bisexual” for her closet-smashing yet ultimately cringe-inducing relationship with Ellen DeGeneres.

Baumgardner, coauthor of the feminist primer Manifesta, still makes plenty of astute observations about the intersection of bisexuality and feminism, particularly how bi women bring “gay expectations” of equality, respect, and sexual fulfillment to their relationships with men. “You wouldn’t be with a man who couldn’t talk about his feelings in an informed and subtle way,” one woman tells her, adding, “On just the most obvious level, you would never be with a man who wouldn’t go down on you.”