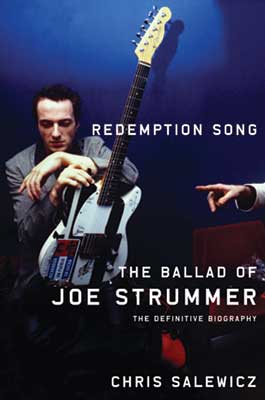 Both scholars of punk history and casual fans should enjoy this surprisingly frank and entertaining biography of legendary Clash frontman Joe Strummer. Salewicz, a music journalist, was there for most of the musician’s early career, and the two remained close until Strummer died from a heart defect in 2002. He traces the roots of Strummer’s progressive politics and multicultural influences to his childhood as the son (born John Mellor) of a well-traveled British diplomat. Strummer’s story—and Salewicz’s prose—come alive in early 1970s London, a world of filthy squats, underground reggae clubs, and race riots. Utterly destitute and often aimless, Strummer renamed himself (a nod to his rudimentary guitar skills and his desire to project an “ordinary Joe” image) and threw himself into the creative whirlwind of the nascent punk scene. Self-
promoting yet egalitarian, strident yet naive—he famously wore a Red Brigades T-shirt at an antiracism concert—Strummer seemed made for the role of punk’s spokesman. Salewicz’s meticulous description of the Clash’s rise from a pub band griping about punks “turning rebellion into money” into a Top 40 chart-topper is engrossing, though even London Calling die-hards may find themselves skimming after the band breaks up three-quarters of the way through this 600-page tome.

It took Strummer’s untimely death at age 50 to reaffirm his towering influence over contemporary music, particularly the now-unquestioned marriage of punk rock and lefty politics. It’s tempting to bestow on him oxymoronic titles like “King of Punk,” but Salewicz doesn’t lobby for sainthood. Strummer, with all his flaws and missteps, was “far too interesting for that.”