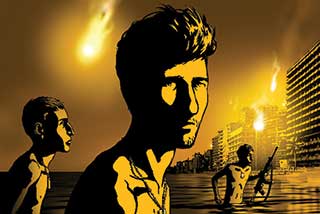 In 1982, filmmaker Ari Folman served as a foot soldier in the Israeli Defense Forces during his country’s invasion of southern Lebanon. For more than two decades, he buried his memories of the conflict—until an old comrade in arms named Boaz told Folman about his strange recurring nightmares. Every night, Boaz said, 26 wild dogs raced through his dreams, one for each of the real dogs he’d shot so as not to alert the enemy during a nighttime mission. Inspired by his friend’s story, Folman tracked down and interviewed his fellow soldiers and pieced together this haunting animated documentary.

Waltz With Bashir, which swept last year’s Israeli Academy Awards, blends past and present, reality and dreams to evoke the surrealism of combat. Troops sail off to war on a commandeered yacht; a soldier shooting while dodging enemy fire looks as if he’s dancing a waltz; tanks roll into battle as pop songs blare on the radio. As the former soldiers tell their stories, the war comes into disturbing focus, and their flashbacks build to a horrific coda. In Folman’s hands, the animated medium takes on gravitas: Pixels and paint cells convey the passage of time, the madness of war, and the horror of the memories that he must finally confront.