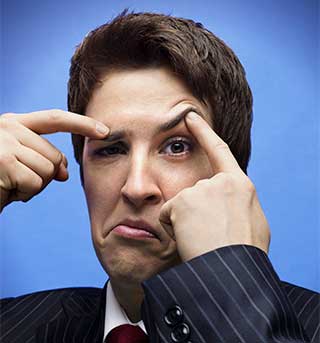 If you don’t know by now, Rachel Maddow is the world’s most unlikely cable news talk-show host. For one thing, she doesn’t watch TV. And she’s young (35), is a Rhodes scholar with a PhD from Oxford, and is openly gay—an industry first. (More than one friend has told me that her ascent is some consolation for the passage of California’s anti-gay-marriage Prop 8.) But her combination of lefty sensibilities, a hipster vibe, wicked smarts, and genuine good cheer has taken the entire country by storm. She’s made msnbc competitive against cnn‘s Larry King for the first time. Existing in the space between Jim Lehrer’s NewsHour and Jon Stewart’s Daily Show, Maddow’s hour-long show privileges reporters and actual experts over pundits, real information over blather and fake fights, and comes with healthy sides of sass and sarcasm. It’s a mix she learned at the left-of-center radio network Air America, where she still broadcasts a live show each weekday. In her spare time, Maddow’s writing a book on the role of politics in the US military. In her other spare time, she’s an enthusiast of graphic novels and mixology. An extended interview is available here. —Clara Jeffery

Mother Jones: You’re TV’s “It Girl.” Why did your popularity take off so explosively?

Rachel Maddow: Two things happened. One, I opened up an umbrella factory at the start of monsoon season. The other thing was that Keith Olbermann’s ratings are off the charts, so I have the best lead-in in cable news. I just hit the contextual lottery.

MJ: You’ve risen to fame critiquing the Bush administration. Will your show change without that foil?

RM: As if Fox News did really poorly with Bush in the White House? Not having the campaign to cover is the biggest change. But there’s probably been, I don’t know, three days in the nine years I’ve been in radio where I’ve felt like I was reaching, and that’s usually because I’m hungover.

MJ: You’ve widened the circle of commentators you deem worthy of talking to.

RM: The good thing about being—I don’t want to call myself a pioneer, so I won’t, but you know what I mean—is that you get to bring your peeps with you. And it’s not out of some effort at affirmative action, but you represent your own experience.

MJ: That must be a lot of pressure.

RM: Well, it would be if I thought about it. But it’s just me and my conscience. That’s my only real audience. I care about what my girlfriend thinks, and my friends, but ultimately it’s me in the mirror.

MJ: Speaking of mirrors, you changed your look a lot for TV. How was that handled?

RM: It wasn’t at anybody else’s encouraging. I wanted my appearance to not be the only thing people would pay attention to. So essentially I was seeking genericness.

MJ: Will women eventually be able to host a show and wear glasses?

RM: I’m not sure msnbc would stop me from wearing my glasses now if I wanted to. The problem is technical, in that the frames are cheap plastic and they reflect.

MJ: Although in the Kennedy era, everybody wore big, chunky glasses on air.

RM: Women or was it all dudes?

MJ: It was all dudes.

RM: I mean, I’m sort of in “Dude Looks Like a Lady” territory anyway.

MJ: Still, it’s nice that you have a hipster sensibility. There’s something so homogenized about the news on every level.

RM: Working in news is a homogenizing lifestyle—that’s part of the problem. People say, “You seem too normal.” Well, yeah, I’ve been in this industry for six weeks. Wait until I’ve been working 14-hour days and having no outside life for five years.

MJ: While at Stanford you were disastrously outed: You’d asked the interviewer to hold a story on being gay until you could tell your parents, but they didn’t. How does that make you feel about outing?

RM: Well, that was more of a bumbling issue than an outing issue. I don’t think they did it out of malice. It was a student paper, and it just happened. Somebody did mail the interview to my parents, which was, I think, a malicious act, but you can spend your life being mad or you can realize you were dumb and didn’t protect yourself.

MJ: But as the first lesbian talk-show news host…I don’t know what title you’d use…

MJ: [Laughs.] …And the issue in general?

RM: I’m in favor of outing when people have demonized or scapegoated gay people for their own public gain. I don’t think just being a Republican is reason enough.

MJ: You’ve been an activist. Is being a journalist influenced by progressive values the same thing?

RM: No. Activism is setting a goal of something you would like to be different, and figuring out what would have to change to achieve that goal. It’s sort of like math. What I’m doing in broadcasting isn’t anything like that. The only thing I’m trying to change in the world is to increase the amount of useful information in it. And entertainment, honestly.

MJ: Speak of your love of Pat Buchanan.

RM: Aww. Pat is a good debater, and I love that, and he has strong beliefs. He listens to people who disagree with him and he’s not condescending.

MJ: He has a great laugh.

MJ: Does he get it when you introduce him with an “It’s Pat!” headline?

MJ: You’re writing a book about the influence of politics on the US Military. How is it changing?

RM: My central thesis is that we need more politics in the military. This idea of “the foreign policy consensus” gave Congress an excuse to be hands-off about deploying armed forces for reasons that never got debated and were often scandalous when they came to light. The number of Iraq veterans who ran for Congress this year? Holy shit. To have the Democratic Party become the party of the veterans? There’s a realignment happening at the urging of members of the military who are sick of being used.

MJ: Olbermann just renegotiated his contract for a reported $7.5 million a year. When do you get to renegotiate?

MJ: Is smart the new black?