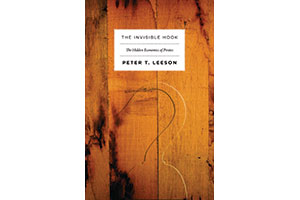 You know that our economy is rudderless when the captains of industry seem to have less fiscal discipline than 18th-century pirates. In The Invisible Hook, Leeson, a professor of economics at George Mason University, offers an engaging and thorough portrait of high seas banditry that goes beyond the pop-culture stereotypes to argue that though often brutal and always mercenary, pirates were ahead of their time when it came to matters of economic fairness and progressive labor practices.

For a start, pirates (not to be confused with the French “protopirates” known as buccaneers, or privateers, who were marauders for hire) often democratically elected their bosses; leaders who tried to amass booty at the expense of the rank and file usually stepped down (or else). When they plundered another ship, pirates were known to parcel out their take evenly, unwittingly acting in accordance with what Adam Smith would later define as the invisible hand. Pirates also drafted extensive codes of conduct and payment, even setting up what Leeson describes as an early form of workers’ comp. For instance, one vessel instituted the following bylaw: “He that shall have the Misfortune to lose a Limb, in Time of Engagement, shall have the Sum of one hundred and fifty Pounds Sterling” for an indefinite period of time. And with the introduction of the skull and crossbones, pirates perfected an early form of corporate branding. By intimidating their targets with the mere display of the Jolly Roger, pirates saved time, resources, and lives. Not that maintaining market share didn’t require its share of violence: “Woe to the few who resisted nonetheless,” writes Leeson.

The Horn of Africa has recently seen its share of piracy, but oddly, Leeson thinks tanker-raiding Somalis have less to teach us about social organization. He argues that modern pirates have little in common with their predecessors, who lived together at sea and formed miniature, self-regulating “floating societies.” Perhaps with enough time, the Somali pirates will also be recognized as managerial antiheroes—or at least worthy of their own Disney franchise.