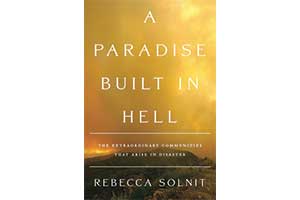 “Disasters,” writes Rebecca Solnit, “are, most basically, terrible, tragic, grievous…not to be desired.” Obviously, but don’t stop reading: Nearly every other sentence in A Paradise Built in Hell will challenge what you think you know about catastrophes, starting with the idea that they bring out the worst in people.

Take panic, for instance: Most of us expect incivility after crises, and worry about rioting, rape, murder, and mayhem. This belief, fueled by sensational media coverage, shapes our reactions. Hunker down or help thy neighbor? Send in food or federal troops? From the 1906 San Francisco earthquake to Hurricane Katrina, officials have often presumed that the survivors were dangerous, not endangered, doubling the damage by emphasizing a paramilitary response over a humanitarian one. In New Orleans, police infamously stopped residents trying to evacuate, and charged the poor with looting when they scavenged to survive their confinement in the drowning city.

Through this people’s history of five natural and man-made disasters—Katrina, earthquakes in San Francisco and Mexico City, a giant ship explosion in Halifax, Canada, and 9/11—Solnit shows that emergencies can bring out the best in us. Catastrophe survivors are often joyous, even ebullient, because they’ve been liberated from the constraints of everyday life. She argues that the extraordinary civility that follows disasters such as September 11 suggests that utopia is possible, if only we recognize how good life can be when the state breaks down.

However, A Paradise Built in Hell exaggerates the joyousness of conditions in places like Mexico City, where at least 10,000 people died and 250,000 lost their homes. Yes, disasters break down social structures, but Solnit’s own stories show that these structures also determine who lives and dies in the first place. Emergency planning, such as securing levees, can help protect the vulnerable. Yet state-sponsored projects don’t fit into Solnit’s picture of spontaneous, anarchic recovery, so they get little attention here. Nonetheless, this is a bracing, timely book.