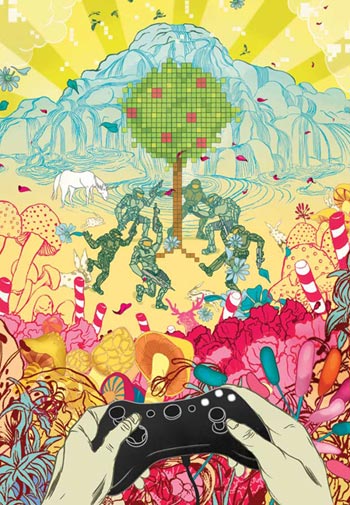 Illustration: Marcos ChinIn February 2010, Jane McGonigal completed another level in her quest to become America’s new guru of gaming. She delivered a talk at TED, the annual California conference that’s an obligatory stop for anyone peddling a Big Idea, from Al Gore to Bill Gates to David Byrne. McGonigal’s was that video games can fix the planet’s toughest problems. It’s a bold, appealing proposition: Game-addled kids, who spend an average of more than 10,000 hours fiddling with consoles and controllers before they turn 21, could wind up stopping climate change with their PlayStations!

It should come as no surprise that gamers, techies, and Silicon Valley types have been thrilled to have a much-maligned pastime elevated to an altruistic pursuit—and by an exuberant, un-geeky blonde, no less. In the year since McGonigal’s TED talk, the 33-year-old director of game research and development at the Institute for the Future, a Palo Alto think tank, has been interviewed by Wired, had an onstage chat with fellow futurist and Whole Earth Catalog founder Stewart Brand, and told the New York Times that 2011 will be the year of “unconventional games with real-world impact.” O, The Oprah Magazine, put McGonigal on its annual “Power List,” suggesting that she deserves a nomination for a Nobel Peace Prize.

McGonigal’s new book, Reality Is Broken: Why Games Make Us Better and How They Can Change the World, is sure to amplify the buzz. She’s hardly the first to convincingly argue that video games aren’t brain-numbing drivel. But she goes much further—insisting that by giving us a sense of accomplishment, meaning, and productivity, games are creating a new breed of “super-empowered hopeful individuals,” poised to transition from saving virtual worlds to saving the real one. For instance, networked games like LittleBigPlanet, where players design and share new levels, are endowing kids with “collaboration superpowers…a new kind of capability, one that has not yet been mastered by anyone, anywhere.” McGonigal estimates that humans have spent nearly 6 million cumulative years playing World of Warcraft—about the same amount of time that’s elapsed since our ancestors first walked on two legs. Thus, she claims, gamers are not simply enjoying themselves, they’re literally evolving in real time. Never mind that Americans watch nearly 29 million years of TV every single year, yet no one suggests our living rooms are a modern-day Olduvai Gorge.

McGonigal’s  fantasy is to create a 1,000-year-long game played by every person on the planet, “achieving a new scale of cooperation, coordination, and cocreation.”

In Reality Is Broken, McGonigal is so intent on leaping to ever-more far-out conclusions that her better points often get blown away. But then, hyperbole is the coin of the techno-utopian realm. (Wired cofounder Kevin Kelly recently declared that the development of the internet is comparable to the advent of spoken language—and more significant than the discovery of fire.) McGonigal’s ultimate fantasy is to create a 1,000-year-long game played by every single person on the planet, “achieving a new scale of cooperation, coordination, and cocreation.” What might this “Long Game” look like, and how would it suck in several billion players? McGonigal offers no solid answers, but she’s sure that one-world gamer-ment will fix everything: “When every family in the remote villages of Africa, or in what today are the slums of India, or throughout Nicaragua—when they and everyone else in the world has access to The Long Game, that will mean greater access to education, culture, and economic opportunity as well.”

If you can get past the manic wishfulness for a sec, McGonigal’s basic point is worth considering: From chess to Angry Birds, good games are profoundly engaging—they dole out psychological rewards that keep us coming back for more; the result is not manipulation, but motivation. McGonigal is a fervent evangelist of the “epic win”—the unique feeling of accomplishment you get when, say, you open the Gates of Ahn’Qiraj in World of Warcraft. “What the world needs now are more epic wins: opportunities for ordinary people to do extraordinary things—like change or save someone’s life—every day,” she writes.

Sure—but the beauty (and fun) of games is that you don’t feel overwhelmed by your virtual defeats, because you know you can eventually advance, and mastering the skills to do it takes only hours or days. In reality, you get just one life, and by the time you’ve figured everything out, it’s game over.

That’s not to say that our lives can’t become more “gameful,” as McGonigal puts it. From FarmVille to Foursquare, game mechanics can make the mundane more enjoyable. In 2003, Howard Dean’s campaign released a grassroots organizing game that helped recruit volunteers (though it couldn’t win Iowa). In 2005, the UN World Food Programme launched Food Force, in which you play a virtual aid worker. The White House got into the act last March, when Michelle Obama announced Apps for Healthy Kids, a contest that drew 95 entries for games that would “inspire kids and their parents to follow healthier lifestyles.”

But as McGonigal’s own résumé shows, designing games that are both engrossing and serious is not easy. She got her start creating alternate-reality games, experiments in turning everyday locations into giant play spaces. In 2004, she helped design I Love Bees, an online and phone-booth-based scavenger hunt that drew in an estimated 250,000 participants. In 2008, she designed The Lost Ring, a web-based game that enlisted players from around the world to imagine a lost Olympic sport. Both were popular, but hardly had a higher purpose: They were stealth advergames for Microsoft’s Halo 2 and McDonald’s, respectively.

In 2007, McGonigal helped run World Without Oil, a monthlong online game that asked participants to spin out scenarios of life as fossil fuels run out. Last year, the World Bank launched Evoke, a $500,000, 10-week “crash course in changing the world” designed by McGonigal that encouraged players to generate ideas for international development initiatives. It drew in around 4,700 active players and raised $30,000 for 25 start-up proposals, such as a micropower project in Liberia. While they had lofty goals, both of these games lacked an obvious ingredient: fun. They weren’t especially easy to get into (assuming you even cared about peak oil or poverty) and had few of the features McGonigal admires most in commercial gaming, particularly the immersive qualities of massively multiplayer role-playing games like Warcraft and the godlike creativity of sims like Spore. Game designer Adrian Hon wrote that McGonigal’s platforms were “more like networked creative writing exercises than games that improve the world in a direct, measurable way.”

McGonigal told me that it’s unfair to compare a game like Evoke with an 800-pound gorilla like Warcraft. “Compared with the World Bank’s previous projects,” she said, “the participation factor was 1,000 times more than they were able to achieve without a game.” But there’s a big difference between getting more people to take their medicine and enticing them to cure the world’s ills. Nobody will devote their days to playing world-changing games until they can vie with their less virtuous competitors.

This may be why McGonigal sounded a little sheepish when I asked about her own gaming habits. “My game load right now is pretty small—probably just a few hours a week,” she confessed. When she was writing Reality Is Broken, her diversion of choice was the pachinko-like Peggle, billed as one of “the top 5 most addicting games of all time.” She’d play it for a quick hit of “blissful productivity” before returning to a world where victories are harder to come by.