The last time I flew to see my father in Latvia, he didn’t get up to greet me. It was the spring of 2008, and he was battling cancer. His hair had lost all of its pepper. His chest and shoulder muscles had evaporated. He sat by a walker surrounded by local newspapers and countless political magazines. “Did you hear we had a gay pride parade again this year?” he said as we sipped black tea. “I don’t care what these people do in bed, but why do they have to parade it in front of everyone?”

Whenever my father raised this issue, my heart sank. He was one of the most open-minded and humane people I knew. He married my mother, who is Jewish, in the ’70s, a time when such marriages were rare in Latvia. His mother stopped talking to him for a few years. Most weekends, our house was filled with an unusually diverse circle of friends: Latvians, Armenians, and Jews grilling Georgian pork kebabs, eating Latvian peas and bacon, and drinking Russian vodka. When Latvia became independent from the Soviet Union in 1991, and the tensions between Latvians and Russian-speaking groups flared up, my father was among a handful of Latvians who supported less restrictive citizenship laws. He was progressive on everything I could think of except gay rights.

While we continued to fight over gay rights at home, gay Latvians took the fight to the street. On July 23, 2005, a few dozen openly gay, lesbian, and transgender people walked through Riga. They were greeted by a much larger group of protesters, who jeered, spat, and threw eggs and bottles. (At future parades, they threw excrement.) The police didn’t provide enough protection, and the parade’s participants fled to a nearby church until emotions subsided.

Filmmaker Kaspars Goba had received an invitation to the nation’s first gay pride event from a friend, a Lutheran minister who’d been excommunicated for coming out. “What I experienced in the Old Town [of Riga] that day rattled me like nothing had before,” he recalls. The event inspired him to embark on a five-year project to dig into the psyche of a post-Soviet nation trying to make sense of democracy and individual rights. The result is the fascinating, fast-paced documentary Homo@lv.

From 2005 to 2010, Goba followed the struggle between LGBTQ organizers and antipride advocates as families were torn apart, jobs lost, and ministers excommunicated. Goba also zeros in on the hypocrisy of local politicians who exploited the issue. A journalist observes how one politician calls pride organizers promoters of “pervert values,” yet doesn’t seem to mind renting out an expensive hotel he partially owns for a gay rights conference. As the fight heats up, Amnesty International gets involved, as do hardcore antigay activists from the United States. Scott Lively, an active international antigay advocate, became a regular presence in Latvia. In 2009, Ugandan legislators proposed a bill that called for the death penalty for homosexual acts a month after he visited the country. Fortunately, there are no bills like that in sight in Latvia, but in 2006, legislators adopted a constitutional amendment prohibiting same-sex marriage. Latvia “is the battle line where homosexual powers from the US and Europe are trying to put their way into former Soviet Union. The doorway is Latvia,” Lively tells Goba.

What’s particularly impressive about Goba’s ambitious investigation into Latvia’s culture wars is his deep desire to show the whole story, rather than neatly package the story in two sides. Goba follows the splintering of different LBGTQ groups in Latvia, and we see the organizers’ mistakes, like not accompanying street parades with broader public forums in a country where homosexuality was a criminal offense until 1992. 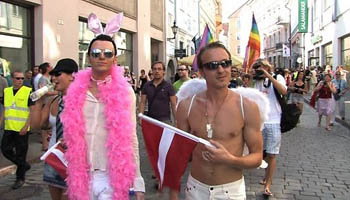 Tallin Pride Parade, 2009. Photo courtesy of Kaspars Goba.It takes a lot of guts to make a film like this in Latvia, where many locals are sensitive to how the small country is portrayed abroad. When Goba’s doc became the first Latvian film in two decades to be accepted by the prestigious Berlinale International Film Festival this year, members of parliament lashed out at Goba for using government grants to make the film, and lobbied to cut off future funding for films about “insignificant issues” like gay rights.

One thing American viewers might miss is some context of the history of LGBTQ rights in the former Soviet Union. While an openly gay Harvey Milk served on the board of supervisors of my adopted hometown in the late ’70s, “homosexual acts” were a crime in the Soviet Union. My father, like many Eastern Europeans, only heard the word “gay” when someone with a big name was locked up in a mental institution for something that the public was told was a disease. Latvia did not decriminalize homosexuality until 1992, and it was the last European Union member to prohibit discrimination on grounds of sexual orientation, in 2006.

It’s this context that helps me try to understand my father’s—and many of my Latvian friends’—inability to accept the gay rights movement. Latvia doesn’t legally recognize same-sex partnerships, but that could change soon. A 2006 survey showed that while 1 in 4 Latvians are against what the survey calls “homosexual lifestyle,” 1 in 3 believe the opposite and are willing to show their support for gay rights. There is also a significant degree of acceptance on the social, everyday level. But as Homo@lv shows, the divisions are aggravated by a political culture which often rejects the idea of resolving conflicts over diversity through sincere discussion and engagement.

If my father was alive, he wouldn’t go to see Goba’s film with me, but I know he would read about it in the newspapers and we would talk and argue about it. That matters a lot. My Latvian grandmother didn’t accept or speak to my Jewish mother for years. But by the time I was seven, after many difficult conversations, my grandmother changed her mind. One of my earliest memories is watching her teach my mother a traditional Latvian recipe for how to pickle pumpkins for the winter. She spoke Russian to my mother, and my mother spoke Latvian back.

Homo@lv is Goba’s first documentary to be shown in the United States. It will screen in Philadelphia this summer and at New York’s NewFest this Saturday.