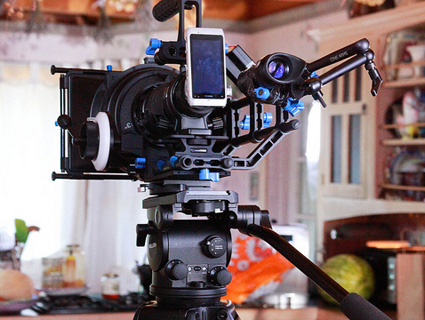 In early 2010, Hooman Khalili hatched his plan to make a theater-ready feature film using a cellphone simply because he could. “Technology is moving so fast I knew it could be done,” he says. He found a phone that shot in true high-definition, the Nokia N8, and knew he had a shot at producing a pixelated-free big-screen experience. When his pleas for backing from Nokia went unanswered, Khalili got the cash he needed for a serious production from former Facebook bigwig Chris Kelly and San Francisco businessman Bill O’Keeffe. By year’s end, Olive, a film featuring two-time Oscar nominee Gena Rowlands was born.

So, can anyone with a smartphone become a filmmaker? Maybe, but Khalili and his co-director Patrick Gilles had to go all-out MacGyver on the pocketable communication device to make it camera-ready. Consider the hack:

All told, $425,000 for hack, cast, and crew yielded a sharply shot film; it only looks amateur during fast-action moments, which are few given that the plot follows a young girl (Olive, of course) who charms her way into the lives of three lonely suburbanites, all without saying a word. The flick features a hauntingly lyrical song “Imaginary Friend,” by Ben Lear (son of Norman) and an eclectic mix of lilting tracks assembled by Khalili and his music supervisor Brooke Wentz. “I work in radio,” says Khalili of his day job, “and I have this theory that the best music in the world is the music you don’t hear on the radio.” So the indie music in Olive won’t sound familiar, which, well, thank god.

Olive is not the greatest movie you’ll ever see. The story is nice enough and there are several strong characters—but the real draw is the technique. The cinematography highlights stunning landscapes and vivid colors, striking scenes that at times upstage the narrative. “I was just trying to be groundbreaking,” says Khalili of his effort to create a made-by-phone movie that could be shown in theaters. He sees Olive as “the ultimate independent film” born of the smartphone age: “Two first-time directors; the queen of independent cinema, Gena Rowlands; no studio or distributor supporting it; and one movie theater in the entire country playing it. There’s no more of an underdog story than this.”

Earlier this month, hoping for a nomination for original song or supporting actress for Rowlands (“She’s due,” he says), Khalili mailed the film to all 6,500 of the Academy’s members. Whether Olive gets a nod, well, that’s now their call.