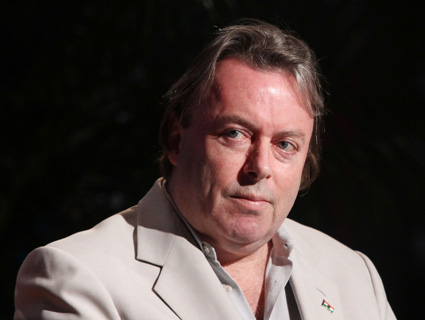 Here is how I came to hate Christopher Hitchens. Hate—as in envy.

In the early 1980s, as a twentysomething trying to start a career as a crusading journalist, I was fortunate enough to share an office with Hitchens. It was just the two of us. And one phone line. We were both working at The Nation. He had come to it as part of an exchange program with the New Statesman, a British publication, and had elected to remain in the wonderful and wild New York City of the late disco era. I was an editorial grunt. The magazine was running short on workspace, and we were assigned a small, windowless office on a floor apart from the main offices. These were the days before voice mail—and much else—and we would take phone messages for each other on pink slips of paper from “while you were out” notepads.

You can learn a lot about a person by sharing an office—and taking phone messages for him.

This is how the average day proceeded: I’d arrive in the morning around 9-ish. The phone would soon start ringing—with calls for Hitchens. I’d tell the callers he was not yet available, and they would leave messages: “Tell him, that was a wonderful dinner last night.” Or, “Mick was so pleased to meet him.” Or, “We may all get together again this evening.” Within an hour or so, the nature of the messages would shift to cover plans for lunch that day: “Tell Christopher we’re all meeting at the Spanish place.”

About this time, Hitchens would saunter in. He’d say hello, turn to the pink slips I had placed on his desk, and return the calls. Did I say this was a small office? We each could hear everything the other said on the phone. He’d first phone his compatriots from the previous evening and review what had transpired. He then would talk to his lunch-mates for the day and arrange the details. Then it would be time… to leave for lunch.

While he was gone, calls would come in for him with invitations for afternoon drinks. (In those days, youngsters, late-afternoon drinks were practically obligatory in certain journalistic circles. Think of it as Manhattan teatime.) After a, shall we say, longish lunch, Hitchens would stop back in the office and return the calls regarding the pending drinks. Then it was, ta-ta, once again.

By now you are getting the picture. But I’m not done yet. After afternoon drinks, the general practice was to return to the office. Upon his arrival, Hitchens would sort through the latest pink slips with phone numbers from his friends, colleagues, and adversaries who had called about dinner plans and after-dinner drinks. (Yes, in those days, after-dinner drinks were a separate stop.)

Soon, it was time for Hitchens to head out to the dinner engagement. He would start packing up. About now, Elizabeth Pochoda, the literary editor of the magazine, would poke her head in the door. “Christopher, you’re going to have that review of the Disraeli biography for me tomorrow, right?”—a soft touch of menace in her voice.

“Oh, yes, of course.” And as soon as she had departed, he’d open his desk, rummage through a drawer, and pull out an 800-page biography of the British prime minister. It was clear to me that the book had yet to be opened. He’d tuck the volume into his bag and say goodnight.

By this point in the day, I knew all his plans for the evening, including the 11-ish rendezvous for cocktails. I wondered how he would be able to read this book and write a review by the next morning. But come the following day—after the calls about the previous night and the calls about the lunch to come had started—he’d trundle into the office, Pochoda would show up, and he’d hand her a 1,500-word essay. And it was—you know the punch line—brilliant. Did I mention this was in the days before computers? Next, it was off to lunch.

I did learn much from Hitchens, but never how to function in quite this manner. What allowed him to live such a packed life was a trait that any of us would relish: He never forgot what he had ever read or learned. His mind was always expanding. That was a natural gift that few of us possess. He could not teach it. But observing Hitchens practice his craft and thrust and parry with intellectuals almost as sharp as him was as valuable an experience as I could have imagined. It sure beat attending J-school. And I much appreciated his sense of social egalitarianism. I found that few journalists of his stature paid much serious attention to the young wannabes nearby. I recall one particular moment, at some social/literary event, when I heard him utter what at the time seemed to be these improbable words, “Carly, you do know David Corn, don’t you?” (It was that Carly.) She, of course, didn’t. Hitchens, as a journalist and as a colleague, was inspiring.

In later years, Hitchens and I had our differences. I was not heartened when he provided left-of-center and intellectual cover to the impeachment crusade waged by extremist radicals of the right in the 1990s. And we had words over his support for the Iraq War—including within the pixels of Slate. I wish I could forget the time, a few months into the war, when he assured me, “Wolfowitz has the rats on the run and this will all be over soon.”

Yet policy and political debates, as important as they are, come and go. Examples remain. Hitchens set one for me. And I know there is no reason to ask him to rest in peace.