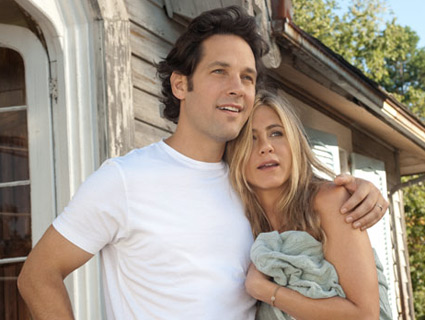 Paul Rudd and Jennifer Aniston in "Wanderlust" (2012)<a href="http://www.wanderlustmovie.net/">Photo courtesy of Universal Pictures</a>

Have you watched that snippet from the redband trailer for Wanderlust? You know, the clip of Paul Rudd walking in on Jennifer Aniston, as she lays smiling atop a heap of naked women? The four ladies, sprawled out on a queen-size mattress, are stroking each other ever so gently. A thin cotton sheet clings just barely to their bodies.

“It was so beautiful,” Aniston purrs. Rudd, still standing in the doorway of the bedroom, appears exasperated, having missed out on what was surely nothing short of pure, carnal elation.

Yeah, well, that entire scene was cut from the movie.

And as you come to terms with the confounding disappointment, please note that there are still other reasons to see this film.

Wanderlust, cowritten and directed by sketch comedy veteran David Wain, basically takes all the things that would make Andrew Breitbart go feral and puts them in a movie with a gaggle of improv-savvy actors. George and Linda (Rudd and Aniston) take a reprieve from the hustle and high stress of Manhattan life. The married couple wind up crashing at Elysium, a bed and breakfast tucked away in a secluded rural grove. And as luck would have it, Elysium is actually a commune populated by all the indolent suspects—vegans, free spirits, musicians, and burnt-out, bedraggled old hippies who have long since rejected the exploitation of the workforce grind. (Think Occupy Oakland, only funnier and without the tear gas.)

The two are quickly immersed in the heaving stereotype of a community, partaking in every activity from hallucinogenic “truth circles” to extramarital boffing. Any plot developments are just scripted excuses to deploy offbeat, uncomfortable humor. Sure, there’s a subplot thrown in about some dollar-worshipping suits trying to tear down Elysium to make way for a giant casino.

But what really shines through is the giddy immaturity, honed splendidly by the film’s ensemble cast. For instance, there are dick jokes aplenty. And, boy, what dick jokes they are. The sight gags involving Elysium’s resident nudist Wayne—played with full commitment and disquieting ease by frequent Wain collaborator Joe Lo Truglio—burn themselves into your memory (for better or for worse is anyone’s guess). And when George gives himself a pep talk in preparation for his first free-love foray with Eva (a fun and fetching Malin Åkerman), the audience gets a couple golden minutes of Paul Rudd going full-improv on his “erection selection.”

David Wain, who has staked out a career built on pop-culture pantomime and a brain-dead interpretation of Monty Python, pieces Wanderlust together from the sweeter elements of much of his previous work: There are unmistakable shades of Role Models (2008), with its harmless but charming sentimentality. The outré characters are like a less mean-spirited version of the personas in The Ten (2007). And the wacky non sequiturs are straight out of the mid-’90s MTV show The State.

So does Wain’s brand of rando burlesque result in an uneven comedy? Of course, and I would expect no less from the guy who gave us Wet Hot American Summer. But the flaws are overcome by the cast’s and crew’s steadfast dedication to the delightfully vulgar and the bluntly weird.

All told, it’s not a bad way to kill 98 minutes of your life during the generally frigid movie-month of February.

Wanderlust gets a wide release on Friday February 24. Click here for local showtimes and tickets.