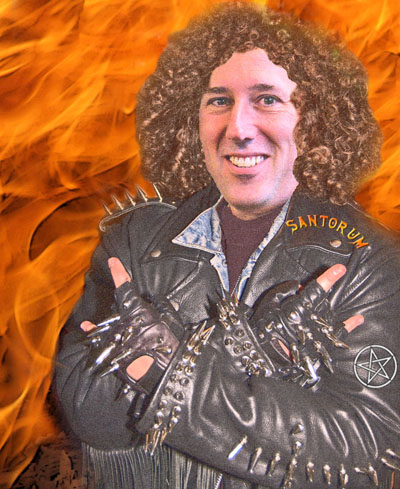 Houses of the Holy: Rick Santorum rocks out. On his rise to the top of the Republican charts, Rick Santorum has picked up plugs and plaudits from media and entertainment luminaries including Glenn Beck, the Duggars, Pat Boone, and Dave Mustaine. Wait, what? Dave Mustaine? The heavy-metal ex-warlock is an admirer of Rick Santorum?

Earlier in the election…when the dude went home to be with his daughter when she was sick, that was very commendable. Also, just watching how he hasn’t gotten into doing these horrible, horrible attack ads like Mitt Romney’s done against Newt Gingrich…I’m hoping that if it does come down to it, we’ll see a Republican in the White House…and that it’s Rick Santorum.

Hungry for another one of MoJo‘s disturbingly difficult quizzes? Then check out our “Newt or Schrute” stumper.

When you consider the contrast between the Christian right and—oh, you know—the satanic symbolism and violent sexuality associated with heavy-metal music, Mustaine’s pseudo-endorsement* might seem born out of a slight cognitive dissonance. But when you think about it more, is there really anything more metal than a guy who talks obsessively about sex, the devil, and the imminent destruction of all that is sacred and holy?

Take our short quiz to find out if you can tell the difference between Rick Santorum quotes and things Dave Mustaine has said and sung. Share your score in the comments. (We’ve heard that some Chrome users are having technical difficulties with the quiz. We’re working on it. In the meantime, please use another browser.)

* For the record, Mustaine used to support Democrats. He has previously expressed admiration for JFK and Bill Clinton, and was also harshly critical of the Reagan administration. So basically, Dave Mustaine is the Zell Miller of heavy metal.