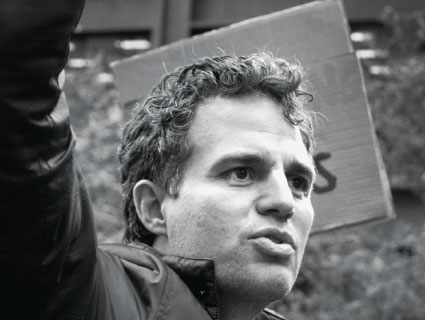 When Bruce Banner gets pissed, he turns into the rampaging green superhero known as the Incredible Hulk. The charming 44-year-old actor Mark Ruffalo, who portrays Banner in the upcoming film The Avengers, isn’t quite so quick to act out. But his inner Hulk emerges when he talks about hydraulic fracturing, a technology whose advances have triggered a boom of gas drilling and environmental backlash in shale regions—including the part of upstate New York where Ruffalo relocated his family from Los Angeles about three years ago.

“Fracking” was a term Ruffalo hadn’t heard before moving to New  York. “It was one of those things where it was like, ‘Oh my God, this is really happening?'” he says. He’s been juggling acting and activism ever since, and expanded his issues to include protesting the proposed Keystone XL pipeline and mountaintop removal coal mining. He cofounded a new group, Water Defense, that launched on March 15 with the mission of fighting the “broader trend towards more extreme and destructive fossil fuel practices.”

His acting career is also hitting a new level with the blockbuster Avengers, slated for release on May 4. It’s a bit of a departure from the indie flicks that have made his name in Hollywood so far. Ruffalo’s career kicked into high gear with a role opposite Laura Linney in 2000’s You Can Count on Me, followed by a series of indie flicks and a 2006 Tony Award nomination for his role in the play Awake and Sing! In between films, there was also personal trauma: a brain tumor, benign but frightening, and the unsolved killing of his brother, Scott, in 2008. Ruffalo went on to earn a Sundance Special Jury Prize for his directorial debut, Sympathy for Delicious, and a 2011 Oscar nomination for best supporting actor in The Kids Are All Right, where he plays a misfit sperm donor sought out by a lesbian couple’s teenagers.

I met Ruffalo when he came to Washington, DC, wife and three kids in tow, to protest the Keystone pipeline. “Acting’s my love,” Ruffalo told me. “This is my responsibility.”

Mark Ruffalo: I love it. There’s no rich and poor part. At a dinner table it will be the poorest farmer with an artist with an actor with a writer. I have a carpool with a corrections officer and a construction worker. My kids get to see that we’re not segregated based on wealth or standing. It’s very cool. It’s also beautiful up there. It’s wide open, water everywhere, trees, wildlife—seasons! Winter is brutal.

MR: Not at all. I have my friends I miss, but [upstate] nobody cares about acting. It’s a point of pride that no one would treat me any differently because I’m an actor than if I was a gardener.

MR: I live right on the Delaware River, about 2½ hours northwest of the city. So I know what it’s like to have these big multinational corporations invade your land and promise jobs and promise it’s gonna be safe, and then you see the consequences—like in Pennsylvania—when it isn’t. The way they treat these people is so outrageous, you know?

MJ: When you first moved there, I take it you were pretty naive about fracking?

MR: I didn’t even know what it was. I thought, “Hey, this is amazing. The cute little blue flame is gonna save us all.” And then I went and saw it, and I was dumbfounded at how much it felt like the same pump-and-dump policy that the United States and our fossil-fuel-extraction corporations have exported to Third World countries had finally come home to roost. I couldn’t believe it! The EPA had been completely excluded from having any regulatory oversight of this technology. This has been literally the only industry in the last 40, 50 years that’s had a free pass. Did we even make it through two questions yet? Sorry, I talk a lot.

“I grew up on Lake Michigan during the PCB explosion, and I remember seeing the sick, dead fish with tumors, the weird deformed seagulls, the scum and the filth floating. We couldn’t go swimming.”

MJ: So what’s up with these rumors of you being on the Federal Terrorist Watchlist?

MR: We were showing [the fracking documentary] Gasland up and down the Delaware River, which is the Pennsylvania border. It was [rumored] that Pennsylvania’s homeland security office was secretly watching us and that we were on a watch list. It snowballed over a couple of news generations into this totally absurd story. About a month later the Washington Post traced it back, and it was complete bunk. Around that time I made a joke in GQ about it. Then I was attacked by the right wing for joking about terrorism.

MJ: Well, the whole thing isn’t entirely outside the realm of possibility.

MR: No, it isn’t. I’m sure they would love nothing better than to start making environmentalists into terrorists. So I’m a bad, bad man. Look out for me!

MR: I lived under a coal-fired power plant as a boy in Wisconsin. I was in fourth grade when they built it. I had a science teacher who was adamantly opposed to it, and he taught us what could be expected from the fallout of living underneath one of these things. I also grew up on Lake Michigan during the PCB explosion, and I remember seeing the sick, dead fish with tumors, the weird deformed seagulls, the scum and the filth floating. We couldn’t go swimming. So me and my friends decided that we were going to start a group called the Foresters. The kids get it.

MJ: Do you have any apprehensions about speaking out politically?

MR: Artists have always been the front line; that’s part of our responsibility. But a lot of the big actors come out, they get slammed, and then they retreat. I completely understand it—who wants to be cannon fodder for the right-wing media? It sucks. But we’re living in some seriously pivotal times.

MJ: What are you enjoying more these days, acting or activism?

MR: Honestly, I’ve probably been doing more of this [activism] than I want to.

MJ: Your career path has been…

MJ: How did your Oscar nomination change things?

“Even if my movies weren’t big blockbusters, directors generally liked me, so they would fight for me. And so now those fights don’t seem to be as hard.”

MR: Between that and The Avengers, all of a sudden people are actually starting to take more interest in these little movies that I’ve been trying to get made for years—smaller, arty movies. Even if my movies weren’t big blockbusters, directors generally liked me, so they would fight for me. And so now those fights don’t seem to be as hard.

MJ: The Kids Are All Right certainly broke new ground for Hollywood.

MR: I think it did a beautiful job of transcending the polemics of that issue. When people sit across from people—gay, straight, whatever—and they talk, they find out that people they may have been demonizing for their lifetime aren’t the demons we’ve expected them to be. And so when you have a movie which portrays marriage in such an honest way and shows us the humanity of these people, then I think you actually have a chance of influencing the debate.

MJ: Which one of your characters has been most like you?

MR: None of them, really. The Kids Are All Right was an homage to my brother. People probably think that’s the closest one to me, but it isn’t. I don’t have that kind of confidence. I haven’t played myself quite yet.

MJ: What, you don’t have Bruce Banner’s anger management issues?

MR: I definitely have my anger moments! One thing that was remarkable about any of the apartments I had as a young actor were the holes in the walls from punching them and throwing things at them in a fit of rage. So I had pictures hanging in very odd places. As I’ve gotten older, those tendencies have calmed down, but that doesn’t mean I don’t know exactly where they reside in me when I have to get to them. Plus, when you have three small children, sometimes you find yourself asking, “Did I really just freak out and yell like that?”