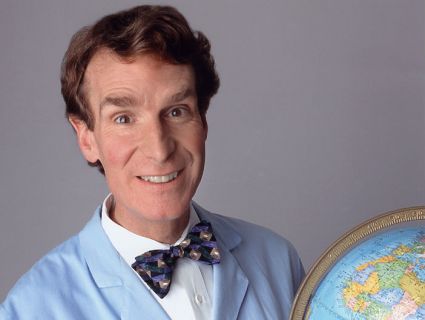 William Sanford Nye (his friends call him “Bill“) made his first mark on history while sitting in a college classroom in 1976.

It was just another day at Cornell University for Nye as an energetic, Ultimate Frisbee-playing undergraduate student. He was chatting with fellow students when in walked their professor—the legendary astronomer and author Carl Sagan—with an unexpected request. Sagan asked the class which Chuck Berry song should be included on the Voyager Golden Record, the collection of songs and images placed aboard the two Voyager spacecraft launched in 1977. (If extraterrestrial life forms ever encounter the Voyager spacecraft, the Record is intended to reflect the culture and diversity of Planet Earth.) Sagan was chairing the committee responsible for selecting the music for NASA, and he told his class that he thought Berry’s 1956 hit “Roll Over Beethoven” was the song the aliens should hear. This was when Nye and his classmates led a much-needed revolt.

“We all said, ‘No, professor!'” Nye recalls. “‘It has to be ‘Johnny B. Goode! That’s the definitive Chuck Berry song!’…Berry was the guy who took blues and turned it into rock n’ roll, after all. So we thought we needed to send a message on that spacecraft.”

Sagan took his students’ advice, and to this day, “Johnny B. Goode” is aboard the Voyager spacecraft, alongside the work of Bach and gospel blues artist Blind Willie Johnson.

Sagan left an indelible mark on Nye, but his his love for science and engineering was inspired much earlier. “The spark was before kindergarten,” Nye says. His mother, Jacqueline, was a codebreaker during the Second World War, fighting fascism with math and science. You can see evidence of some of her work, declassified in 1992, at the NSA-affiliated National Cryptologic Museum in Maryland. The Smithsonian in Washington, DC, had an exhibit dedicated to enigma machines, and it included a photo of Jacqueline. “She worked in a bunker, waiting for Nazi bombs to drop or something,” Nye jokes. Meanwhile, his father, Ned, was held in a Japanese prisoner of war camp. “Now that sounds like it sucked,” Nye says. “If you ever have the chance, I wouldn’t recommend it. Not one bit.”

Nye’s fascination with the natural world started at the tender age of 3, and only intensified from there on. “I grew up with the space program,” he says. Throughout childhood and his adolescence, he consumed what he could in physics, rocket science, zoology, and so forth. “Physics was really my thing, man.” As a teen, Nye built a Heathkit Sine-Square Wave Generator, which still sits in his former classroom at Sidwell Friends School in Washington, DC. (The Smithsonian actually contacted Nye about the gadget, expressing interest in inducting the 40-year-old piece of lab equipment into its vast collection.)

In the years since high school and college, his career trajectory was a blend of hard science and big laughs. After Cornell, he worked as an engineer at Boeing. Unfortunately, he could never make the grade to achieve his dream of becoming a NASA astronaut. In 1999, Nye told the St. Petersburg Times that every few years he’d apply to be an astronaut and went in for the physical. He’d get rejected every time. Instead, Nye went into the entertainment industry, ditching the engineering world for stand-up comedy.

“Steve Martin was another guy who changed my life,” Nye says. “He was an enormous influence on me; he changed everything for American comedy.” Nye has never met Martin, but he’ll have a good story to tell him if he ever does: In 1978, he won a Steve Martin look-alike contest in Seattle. In 1993, Seattle’s PBS affiliate started making Bill Nye the Science Guy, which made the comedian/engineer a household name. For nearly half a decade, Nye used his show to teach science to children, while infusing his program with parodies of pop songs and modern culture.

“A TV show has to be entertainment first, education second,” Nye instructs. “I spend a lot of time with Nobel laureates and a lot of rocket scientists. Being a good teacher is a completely different skill from being a good scientist.”

“He’s been instrumental in helping advance some of the president’s key initiatives to make sure we can out-educate, out-innovate, and out-compete the world.”

In recent years, Nye has undergone something of a career and image renaissance. He is the CEO of the Planetary Society, the world’s largest nongovernmental space interest group. He has a YouTube series with NASA. He was on Dancing with the Stars this year, his highest profile foray into dance since he finished fourth at a Cornell talent show where he did a jitterbug routine choreographed to “Runaround Sue.” He organized the “Save Our Science” campaign, which has pushed Congress and the White House to provide at least $1.5 billion annually for planetary science and exploration.

“He’s been instrumental in helping advance some of the president’s key initiatives to make sure we can out-educate, out-innovate, and out-compete the world,” an Obama administration official tells me. “The president lights up when he sees Bill,” another official says. (That’s not to say Nye is never at odds with the president; in early December, he issued an open letter on YouTube to Obama asking him ensure more funding for planetary exploration—something that has endured some rough budgetary hits during the Obama years.) 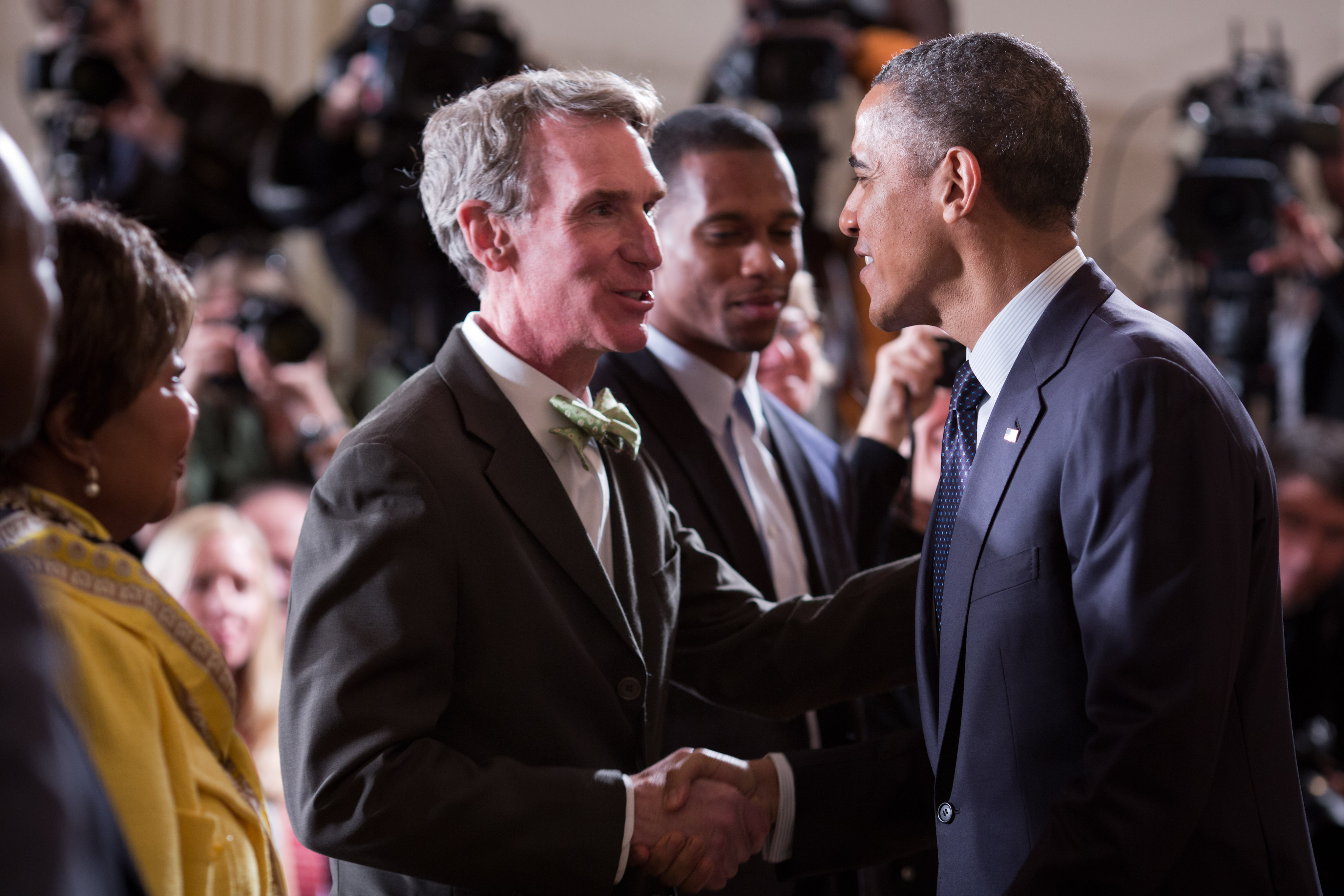 But of his new endeavors, he’s likely best known for his politically tinged, no-bullshit talk about science education in America. Over the past few years, he’s gained wide attention on social media, the lecture circuit, and television (he’s appeared on CNN’s Piers Morgan Live and HBO’s Real Time with Bill Maher, among others) for countering creationist drivel, conservative politicians’ claims, and climate change denial.

“I fight this fight out of patriotism,” Nye says.

“I mean, zapping [asteroids] with lasers, what could be more fun than that?” Nye says.

“We have a problem,” he continues. “We can’t have economic growth without basic investment in science and research. And we can’t have irresponsible school board members in Texas teaching that the earth is 10,000 years old. We can’t have us embracing scientific illiteracy.”

When I ask Nye about what he considers his current top-three political passions, he responds: “Climate change, raise the standard of women around the world through education, asteroids.”

Yes, Nye is really into asteroids—specifically, fighting the ones that may imperil human civilization.

“Sooner or later we’re going to have to deflect an asteroid,” Nye says. “And we’re the first generation that can do something about it.” As the head of the Planetary Society, Nye and his team published a plan for using solar-paneled-fitted “Laser Bee” spacecraft to evaporate or volatize parts of an asteroid threatening earth. The parts that burn off have momentum, and that momentum is hopefully enough to “nudge” the asteroid. “It’s a matter of life or death for people…It’s ironic that people are running around worried about Obamacare while this other troubling thing looms.”

The Planetary Society’s proposal has intrigued NASA employees enough that some of them show up at the Society’s asteroid meetings. “I mean, zapping rocks with lasers, what could be more fun than that?” Nye says. Additionally, he has reviewed the Obama administration’s own $2.6-billion asteroid-lasso initiative—and he’s not impressed. “I don’t think it’s a good value,” Nye laments. “I don’t think it will happen.”

But what is Nye’s dream project—for whatever spare time he has when he’s not battling asteroid doom or combating the proliferation of pseudo-science in America. It turns out that he has a script in his desk that he hopes Hollywood will find compelling.

In 2009, Nye finished his screenplay for a biopic on Nathaniel Bowditch, an American mathematician and the father of modern ocean navigation. (Bowditch’s 1802 book The American Practical Navigator is still carried aboard US Naval ships.)

“He was born in Salem, Mass., sold as an indentured servant, taught himself Latin, and found a new way to compute longitude,” Nye gushes. “I would very much like to make this guy’s life story into a major movie.” The film would be filled with adventure, triumph over adversity, and even have a plot twist regarding a supposed death at sea.

“Who’d star in it?” Nye says. “Maybe Brant Daugherty, [who was on the same season of] Dancing with the Stars…But we’d actually need a skinnier guy—maybe Shia LaBeouf.”

As for the leading lady?

“I’d say…Tyne Stecklein, my dance partner on Dancing with the Star,” Nye endorses. “I tell ya, that gal is striking. She will turn anybody’s head—and she’s quite the actress, too.”

This article was adapted, with permission, from a version that appeared in the Fall 2013 issue of the Sidwell Friends Alumni Magazine. (Full disclosure: I also attended the school.)