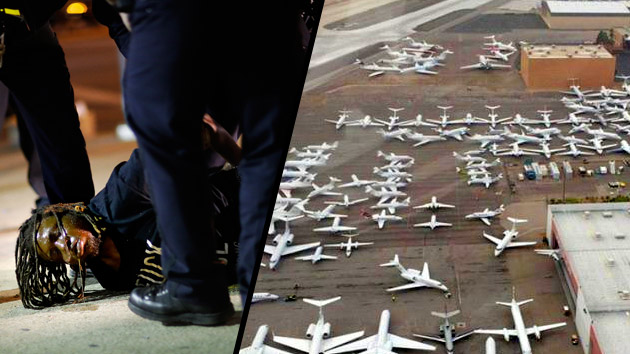 On Saturday night, the biggest news story in America was the welterweight championship fight between Floyd Mayweather Jr. and Manny Pacquiao, in Las Vegas (Mayweather won). The second biggest was probably the continuing demonstrations across the nation over the death of Freddie Gray: Police in Baltimore deployed pepper spray and arrested protesters defying a 10 p.m. curfew.

The two events are completely unrelated, of course, unfolding on opposite sides of the continent. But it’s hard to resist making some simple comparisons, especially when you see a photo like this one posted on Twitter by Los Angeles sports reporter Liz Habib. Just look at McCarran International Airport in Las Vegas:

So much expensive hardware was heading into Las Vegas this weekend that the airport itself urged private plane pilots to consider alternative places to land.

Arrived in #LasVegas to a #SoldOut airport! Ready for the big fight tonight #MayweatherPacquiao #Boxing pic.twitter.com/jYjrnqzZUo

In attendance at the match on Saturday night was a heady mix of the superwealthy, like the CEO of CBS, Leslie Moonves—whose compensation package was worth $57.2 million in 2014, according to the Wall Street Journal—along with the usual actors and models. The match-up itself, at Las Vegas’s MGM Grand Garden, was expected to bring in more revenue than the GDP of 29 countries.

Meanwhile, protesters across the country were taking on what President Obama himself has described as decades of income inequality, lack of opportunity, and conflicts with police. Saturday night, there were more scenes of tension as demonstrators refused to comply with the city-imposed curfew: 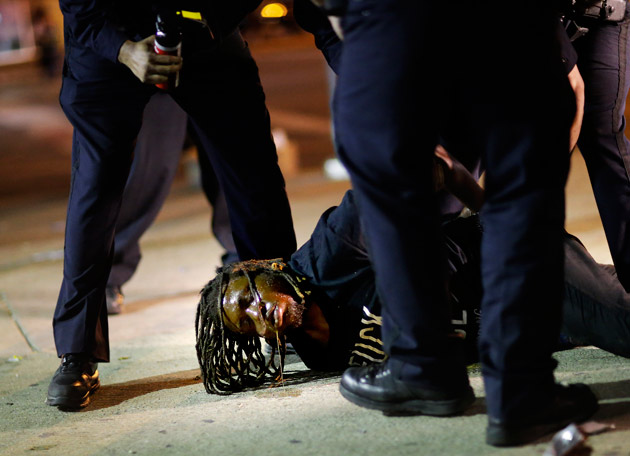 A man was arrested and hit with pepper spray as police enforced a 10 p.m. curfew. David Goldman/AP 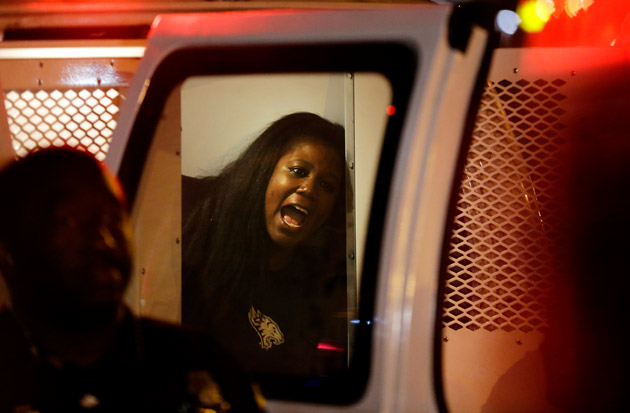 A woman is loaded into the back of a van after being arrested in Baltimore, Saturday night. David Goldman/AP

The timing is coincidental. But the two unfolding events starkly illustrated what could be a major theme of the 2016 elections.

“We have to be honest about gaps that exists across out country, the inequality that stalks our streets,” Hillary Clinton said on Wednesday, in a wide-ranging speech about policing, race and class. And in January, Senator Ted Cruz told Fox News that “we’re facing right now a divided America when it comes to the economy.” (He blamed President Obama.)

With images like these flashing across our screens, it’s hard to imagine this topic going away anytime soon.