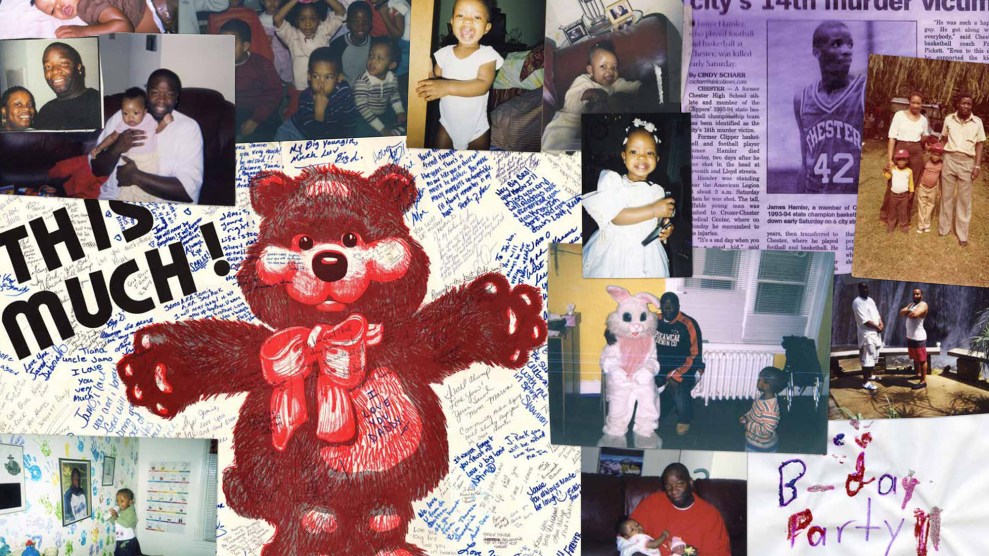 I’ve spent the past seven years documenting the lives of people in Chester, Pennsylvania, a predominantly African American city of some 34,000 people located just southwest of Philadelphia. Three years into my time there, I realized that being an image-maker wasn’t having the impact I desired. Whenever I spoke with my best friend in Chester, Dee Dee, she always had the same stories: how someone shot up her street just the week before, or how she struggled to find a safe place for her children to sleep. People kept saying the same thing: Chester was a place where you could get away with murder.

So I began to investigate the high frequency of unsolved murder in Chester and how that reflects a national epidemic. As Edwin Rios and Kai Wright report in “Black Deaths Matter,” 144 killings in the city have gone unsolved since 2005. “Night now in Chester is night now in many places—night now in Philadelphia, in Camden, and every other place you can think of,” says Donald Newton, an activist and lifetime resident.

Why is it so hard for families of color to get justice when a loved one is murdered? Read our story from MoJo‘s May/June issue.

I have been collecting stories of families struggling to get justice following the murder of a loved one. This project is a deep investigation into the emotional, physical, and spiritual landscape that transpires from unresolved trauma. It consists of a series of portraits of each family affected by unresolved trauma, paired with an image from the murder scene captured around the time of day the crime was committed. I’ve also collected ephemeral material (letters, oral histories, love songs, drawings, diary entries, etc.) to involve the families in their depiction. By opening drawers and revisiting albums, this work aims to restore fragile memories and forge pathways to justice, healing, and restitution for the families of Chester.

This work is personal. When I was a teenager, my best friend, a young black man, was slain with a kitchen knife. The wealthy white man who killed him was never convicted. I witnessed my friend’s single mother unravel, my mother’s love the only thing holding her up. The questions that formed and went unanswered only lanced us deeper with time. The saving grace was our solidarity. With this project, I want to provide a safe space for families in Chester who are dealing with this same formation of loss, to connect and create understanding together.

“Night now in Chester is night now in many places—in Philadelphia, in Camden, and every other place you can think of,” says one local activist.

The New York Times recently reported that 1.5 million black men are missing from American communities, mostly through imprisonment and early death. How does this missing generation affect the social landscape of the places they left behind? How do familial roles transform as a result? What does justice look like for families who are missing their beloved young men? I know the answer cannot simply be to put more black men in jail. With this work, I want people to understand the complexities of living in a community like Chester, and how everything is interlocked: a patchwork of trauma and courage, deeply rooted in the foundation of American society.

Right now, the immediate goal is to create an interactive, web-based platform that will serve both as a database of memories speaking to the collective experience of unresolved trauma and as an online space for conversations between community members. I hope to invite a larger audience to look beyond the stereotypes of a community in crisis and contemplate our commonalities—beliefs and biases—rather than our differences.

One issue does not define Chester. It is a multidimensional, changing landscape, and I’ve witnessed powerful moments of strength and beauty. Ultimately, in sharing this experience, I am optimistic at the prospect of disproving popular perception: Chester is not a place where you can get away with murder.

Jabril Bradley, 20; killed at Ninth Street and Avenue of the States
Bradley was riding his bike home from a friend’s house on the east side of Chester on September 1, 2011, when an unknown gunman opened fire. He was struck once in the back but continued to ride his bike home. Blocks later, he collapsed from blood loss. He bled to death on the street.

Terrance Webster, 2; killed at Chester Apartments, Ninth and Lamokin Street
Terrance Webster, son of Tisheta Green, was killed on June 14, 2010 at 2:30 a.m. The incident occurred as the family returned from another relative’s house. As they entered their apartment, several shots were fired at the father, who was carrying Terrance. The child was struck in the head and died shortly after in the hospital.
In photo: Tisheta Green (mother) with two of her sons 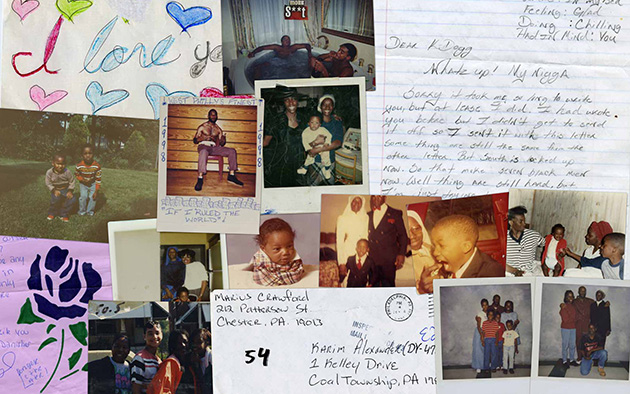 Gary Brightwell, 30; killed at Sunoco gas station, Ninth Street and Kerlin Street, pump No. 5.
Brightwell got a phone call and went to get gas in his car. He was shot once, killed at pump No. 5 in front of a number of people.
In photo: Shanell Brightwell (daughter), Jabrae Davis (grandson), Brezhae Davis (granddaughter)

Arthur “Art” McElwee, 23; killed in alley off Ninth Street, between Booth and Clover Streets
McElwee was shot multiple times in an alleyway and was pronounced dead at the scene of the crime.
In photo: Elena McElwee (mother), Elena Jo McElwee (twin sister), Dawn McElwee and Aisha McElwee (sisters). 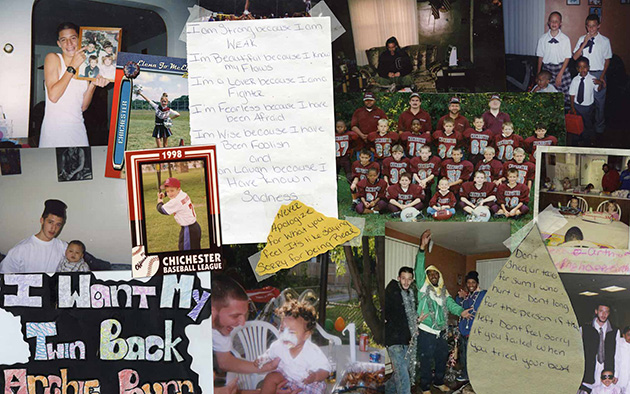 Emill Smith, age 22; killed at the Green Bar on East Seventh Street, between Caldwell and McIlvain Streets
In the early evening of March 11, 2008, Emill Smith was leaving the Green Bar. According to accounts by witnesses at the scene, he kissed a friend on the forehead and was getting into a car when he was shot multiple times. He wore a chain that was worth upwards of $10,000. It was stolen from him the night he was killed.
In photo: Valerie Maxwell (mother), Janiyah Van (daughter), Khaneef Taylor (brother), Ka’Marion Tayler (brother), Ka’Tavion Tayler (brother) 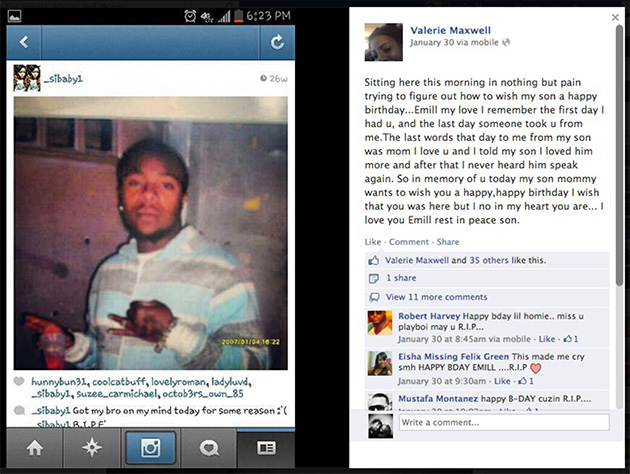 Valerie Maxwell’s Facebook page, where she regularly posts to her son, Emill Smith

MacMatherson Miller, age 25; killed on West Seventh St., between Booth and Harwick Streets
Miller received a call from a friend on October 7, 2009, and was told to meet on the corner of Seventh and Booth. As he waited in his car, someone opened fire, killing him instantly. Miller had great promise in high school, where he was the star quarterback for Chester High School. (He was inducted posthumously into the Chester High School Hall of Fame.)
In photo: Tareeah Garrett (girlfriend), Asir Hudson (girlfriend’s son)

James Hamler III, 30; killed near American Legion Bar, West Seventh and Lloyd Streets
Late on the night of June 17, 2007, Hamler was outside the American Legion bar when a car drove up and opened fire on the crowd. Hamler was hit and died on the scene. 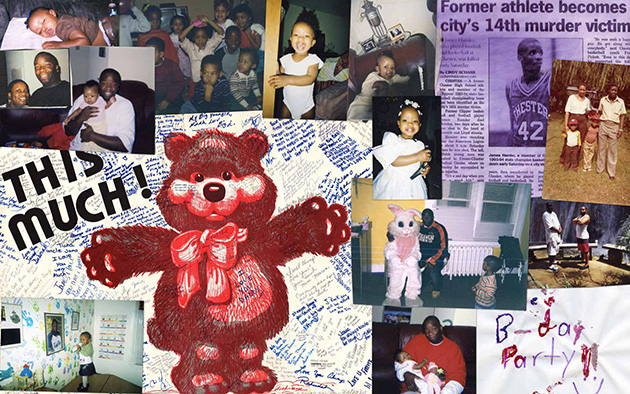 Eddie “Fast Eddie” Swain-Lane, 29; killed at Third and Palmer Streets
Swain-Laine died after trying to save his girlfriend, Shanae Bailey, and her three-year-old daughter, Anaija Bailey, as a fire ripped through their home. He was down the street when he realized his home was on fire; he ran to the house and made the decision to go inside the burning house.  The death was ruled suspicious but no investigation was completed.

Linda Rose Brown, 44; killed at Edwards Street, corner of Highway 291
In late March 1998, Brown went missing. Her body was found two weeks later in an abandoned building. The day Brown’s body was found, her son Tyrone King was called by a police officer at the scene and was told to come and identify the body. Based on physical evidence, the police told King she was strangled to death by a wire hanger, then shot in the head and later dumped.
In photo: Tyrone “TK” King (son), Hammenah Rollie (daughter), Amin Rollie (son)

Correction: A previous version of this story included an incorrect nickname for Karim Alexander.