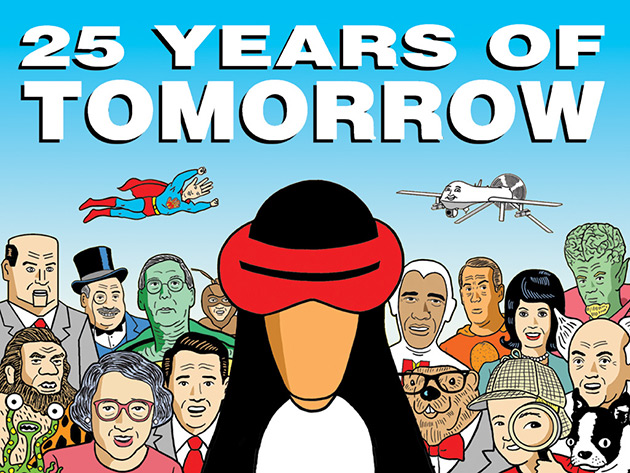 Earlier this year, Tomorrow (AKA Dan Perkins) was nominated for a Pulitzer—not bad for an independent cartoonist who got his start in zines and alt-weeklies and survived the bumpy switch from newsprint to pixels, not to mention two Bush administrations. To commemorate this odds-defying accomplishment, Tomorrow has spent the past year tracking down just about everything he’s drawn since 1990 and compiling it in a massive, two-volume set that he’s self-publishing through a just-launched Kickstarter campaign. In addition to the awesome-looking collection, incentives for funding the project include a stuffed Sparky, swag from TMW pals Pearl Jam, and a chance to indelibly ink Tomorrow with an image of America’s favorite flightless political observer.

Mother Jones: Sorry to put a damper on things, but I heard that print is dead. What are you doing compiling a 1,000-page, 15-pound set of volumes for people to buy?

MJ: Tell me how you got the idea to put together almost everything you’ve done over 25 years. 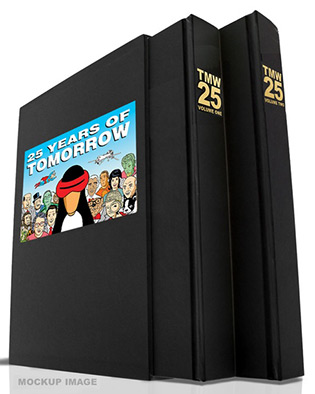 TT: A couple of years ago, I ran across this big Taschen two-volume set of midcentury advertising. As I was looking at this whole package, something just clicked because I realized that my 25th anniversary was coming up. I always mark 1990 as the real start of my career because that’s when the strip started getting picked up; it’s when it stared getting political. (It’s a little bit of an arbitrary date; really if you wanted to mark an anniversary it would have to be when I turned five, because I always drew cartoons as a kid.) But 1990 effectively marks 25 years as a professional cartoonist, and that’s a big chunk of my life. And I thought it shouldn’t pass without marking the moment.

MJ: Has going though 25 years of work been nostalgic?

TT: I wouldn’t say it’s been nostalgic. Initially, it was horrifying! The very early work, it makes me cringe a little bit. And then it gets pretty good within a couple of years, and I was relieved to find I was actually proud of it. A lot of this stuff I hadn’t read in 20, 25 years. I was kind of surprised how well it held up, honestly.

MJ: Well, you’ve been hitting so many of the same themes throughout your career. Which topics or throughlines did you see as you went through your work?

TT: Certainly gun control, on which we’ve made almost no progress in 25 years. Heath care is a very interesting one as a person who’s been a freelancer for 25 years. For a country that celebrates entrepreneurship, the peculiar American linkage of health care to employment status is puzzling. Obviously we have made progress on that one.

MJ: Some of the political figures, like the Clintons and Bushes, haven’t changed.

TT: Yeah, I’m looking at all these years I’ve spent writing about the Bush family and hoping I don’t have to do that beyond this next election. 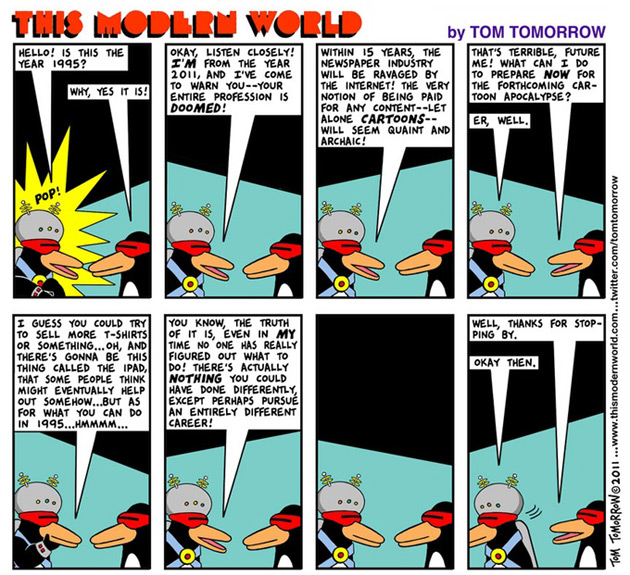 MJ: How has your perspective on the strip changed?

TT: In 1990 there was no internet, there were no blogs, there was no social media. In those days I really viewed the strip as a vehicle for conveying information that people might not have had access to elsewhere. I don’t see it quite in that light anymore; I assume people know how to use search engines. I think it’s gotten a little more playful and less didactic. It’s still the wordiest strip out there, but less than it used to be.

MJ: One of incentives for the stretch goals is that if you read your top goal, you will get a Sparky tattoo.

TT: It would be my first tattoo of my own creation. It’s crazy expensive to make this; all the money is going to printers and to everyone that I’ve been working with who deserve to be paid for their work. It’s been a tremendous amount of work to get this stuff located and scanned and sequenced. It’s a labor of love until we hit some stretch goals. If we reach them, I was just trying to think of some extravagant gesture to show how much that would mean to me. So I just threw in the tattoo. I honestly didn’t think about it a lot. I may come to regret it!