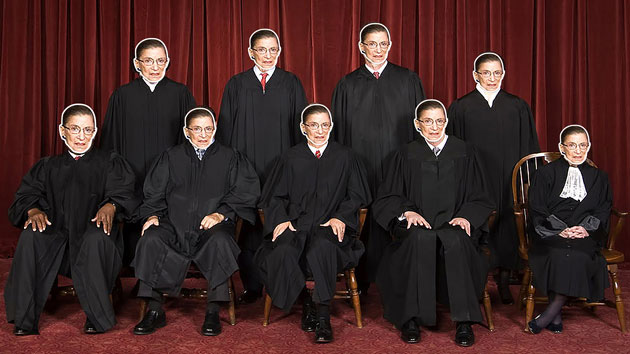 In 2012, Justice Ruth Bader Ginsburg made headlines by saying she hoped to see an all-female Supreme Court one day. “When I’m sometimes asked when there will be enough [women justices] and I say, ‘When there are nine,’ people are shocked,” she explained during a legal conference in Colorado. Nobody “ever raised a question” when nine men dominated the court, added the now-82-year-old, one of three women on the bench today.

“When I’m sometimes asked when there will be enough [women justices] and I say, ‘When there are nine,’ people are shocked,” said Justice Ruth Bader Ginsburg.

If Ginsburg got her wish, what might that mean for America? And what if women had taken a majority of seats on the highest court a long time ago? That’s a question raised by dozens of feminist law scholars and lawyers across the United States who are putting together a new book, Feminist Judgments, in which they re-examine 24 of the most significant Supreme Court cases related to gender—dating from the 1800s to the present day—and rewrite the court’s final decisions as if they had been the judges.

More than 100 people applied to help write the book, which will be published sometime next spring, according to Kathryn Stanchi, a law professor at Temple University and one of three editors overseeing the project. All selected applicants agreed to follow an important rule: They could only base their revision on the legal precedent that bound the Supreme Court back when the case was first decided.

Some original rulings had little chance of surviving the rewrite.

Feminist Judgments also re-examines decisions that at the surface level appeared to help women, but that also contained rationale later used to restrict their rights.

Stanchi says Feminist Judgments was inspired by similar projects in Canada and the United Kingdom, and that legal scholars in Ireland, Australia, and New Zealand are working on their own versions. The goal, she adds, is to demonstrate that it’s not “pie in the sky or outrageous” to protect women’s rights with the law of the land. “You can have feminist jurisprudence with the precedent that we have now,” she says. “We just have to view it differently.”