Before I read the author’s note, there was something that confused me about William Stout’s great new book, Legends of the Blues, due out May 7 from Abrams ComicArts (with an intro by music journalist Ed Leimbacher). Where were Memphis Minnie, Mississippi John Hurt, and Reverend Gary Davis, three of my personal faves? How could he overlook them? Also, why did the artwork feel so familiar, yet so different from other stuff I’d seen from Stout—an acclaimed comics, fantasy, and pop-culture artist and illustrator whose work you’ve undoubtedly seen. And then it hit me: Robert Crumb! This, as it turned out, was the answer to both questions.

Way back when, cartoonist Crumb, a blues and old-time music freak who has drawn his share of artists and album art (you can view some of them here along with our Crumb interview), created a series of 36 Heroes of the Blues trading cards. They included, among others, Memphis Minnie and John Hurt; Stout, an avid blues fan, had loved Crumb’s cards and didn’t want to replicate them. But the others were fair game. Rhino Records founder Richard Foos, a friend of Stout’s, ended up licensing Crumb’s portraits for a series of greatest hits CDs for Shout! Factory. And since Crumb had moved on to other stuff, Foos approached Stout to produce some additional ones in a style similar to Crumb’s.

That’s how it started. But after his assignment was complete, Stout kept it up. He was hooked. While recovering from cancer treatments, he cranked them out, imagining that he would produce a bunch of new trading-card sets. In the end, Denis Kitchen, another friend (and the guy who commissioned Crumb’s original cards) suggested that Stout make them into a book instead.

Legends… profiles a whopping 100 blues artists—many of them you’ll recognize and many you won’t. It’s a must for blues fans or even dabblers—although Stout cautions that purists might be upset by his inclusion of crossover artists. Hey, whatever. The format is simple: Each spread contains the artist’s vital stats; recommended tracks; notable tributes and covers by other artists; and a short, punchy mini-profile of each one. The book comes with a 14-track CD compilation, with some nice gritty old tunes from the likes of Mississippi Fred McDowell, Bukka White, and Rev. Robert Wilkins—I’m listening to it right now!

But the real treat is Stout’s Crumby (sorry) portraits. Colorful, evocative, playful, they pay homage both to the original cards and to the great musicians Stout came to admire. There’s the badass blues guitarist Robert Johnson, said to have sold his soul to the devil in exchange for his chops. Champion Jack Dupree, who made the unlikely leap from pro boxer to pro musician. The highly talented yet modest sideman Papa Charlie McCoy. And Lucille Bogan, notorious for her raunchy lyrics. The Crumb effect runs especially strong with certain portraits—for instance, Slim Harpo, whose tunes were covered by a who’s who of 1960s rock icons. Here’s the Stones doing Harpo’s “Shake Your Hips” way back when.

So, okay, I missed those few musicians, but I also learned about plenty of folks I’d never heard of—including a good number of blueswomen. And the poor chap had to crank out 100 portraits. You could hardly ask him to do more. Except that he did so anyway. By the end of Stout’s drawing marathon, he had produced 150 portraits, so maybe a sequel is in the cards. Talk about collecting ’em all! 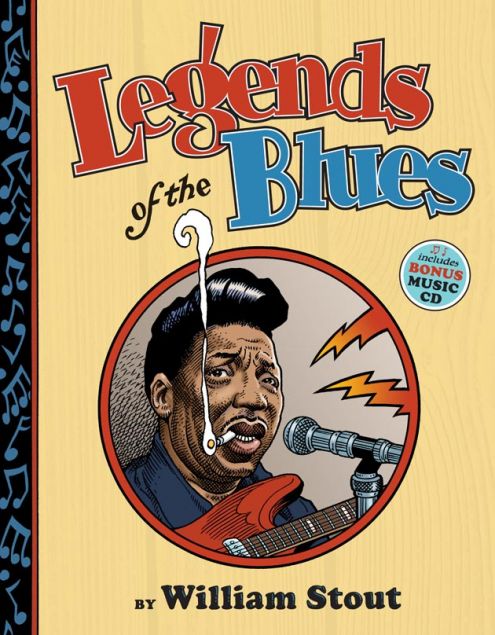 The book’s cover features a young Muddy Waters, a.k.a. McKinley Morganfield (April 4, 1913-April 30, 1983). Instruments: guitar, vocals. A spiritual protégé of Son House and Robert Johnson, the prolific Morganfield got his nickname because he loved playing in the mud as a kid. Recommended tracks: “I Can’t Be Satisfied,” “Rollin’ and Tumblin’,” “Rollin’ Stone,” “Mannish Boy,” “She Moves Me,” “Hoochie Coochie Man,” ” I Just Want to Make Love to You,” “I’m Ready,” “Got My Mojo Working,” “You Shook Me.” 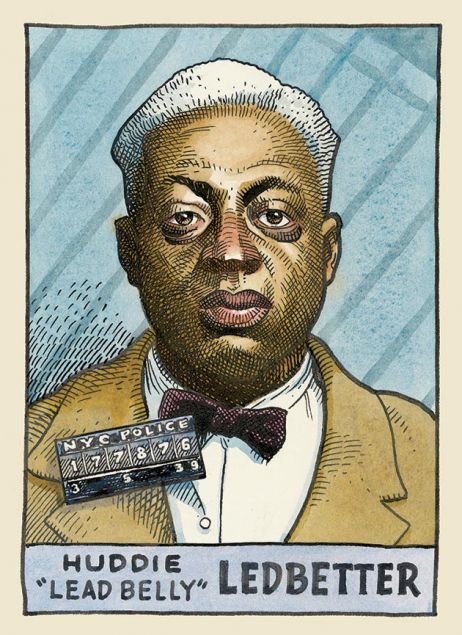 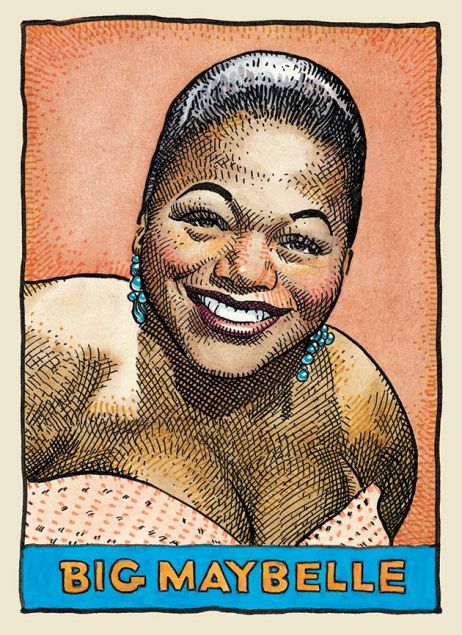 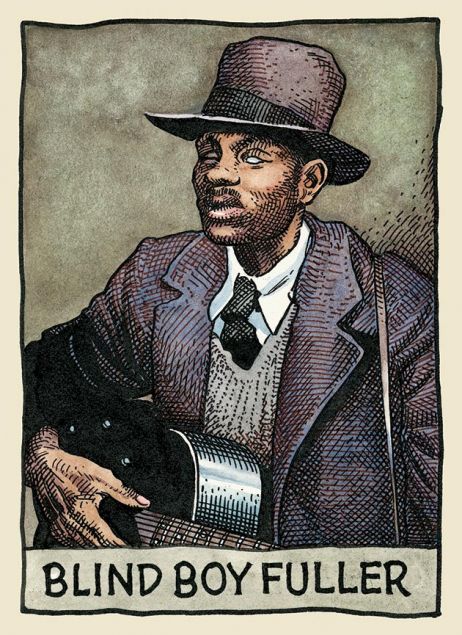 Blind Boy Fuller, a.k.a. Fulton Allen (July 10, 1907-February 13, 1941). Instruments: guitar, vocals. Began losing his sight during his mid-teens from ulcers due either due to snowblindness or to chemicals thrown in his face by an ex-girlfriend. Recommended tracks: “Rag, Mama, Rag,” “Truckin’ My Blues Away,” “Get Your Yas Yas Out,” “Step It Up and Go,” “Mamie,” “Rattlesnakin’ Daddy.” 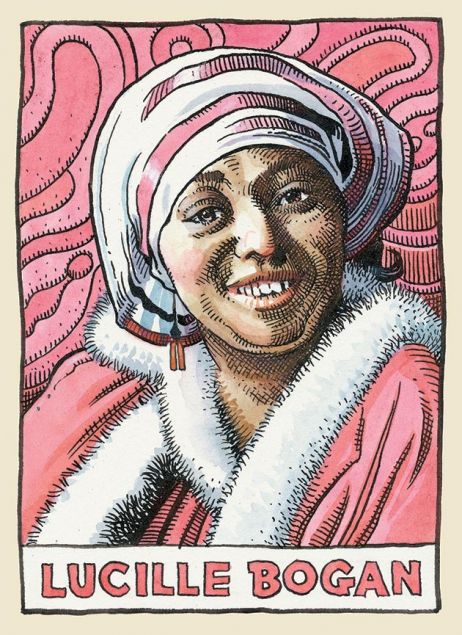 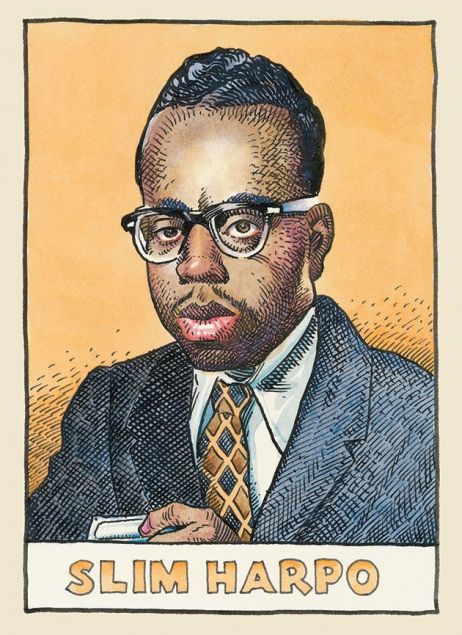 Slim Harpo, a.k.a. James Moore (January 11, 1924-January 31, 1970). Instruments: harmonica, vocals. Music was always a side job for Slim, whose tunes were nonetheless covered by, among others, the Kinks, the Rolling Stones, the Who, and the Yardbirds. Recommended tracks: “I’m a King Bee,” “I Got Love If You Want It,” “Rainin’ in My Heart,” “Baby Scratch My Back,” “Shake Your Hips.” 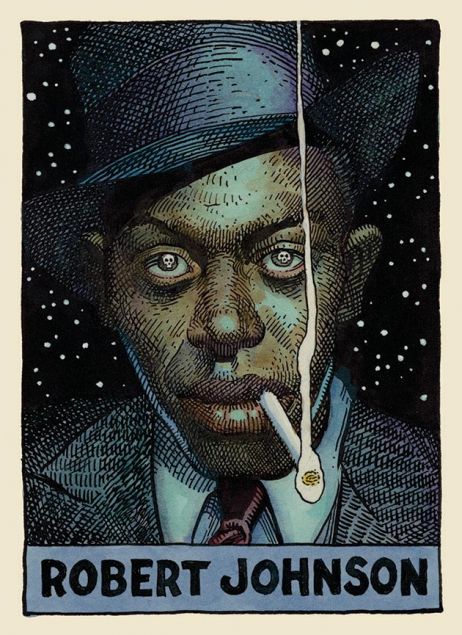 Robert Johnson, a.k.a. Robert Leroy Dodds (May 8, 1911-August 16, 1938). Instruments: guitar, vocals. Johnson was rumored to have sold his soul to the devil for tuning his guitar just so. The influential blues master has been covered by the likes of Cream, Fleetwood Mac, Led Zeppelin, and the Rolling Stones. Recommended tracks: “Crossroads Blues,” “Love in Vain,” “Have You Ever Been Lonely,” “Hellhound on My Trail,” “Stop Breakin’ Down Blues,” “From Four Until Late,” “Traveling Riverside Blues,” “Come On in My Kitchen.” 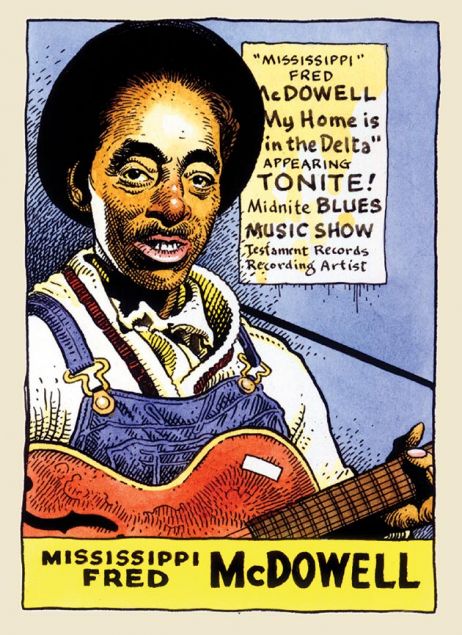 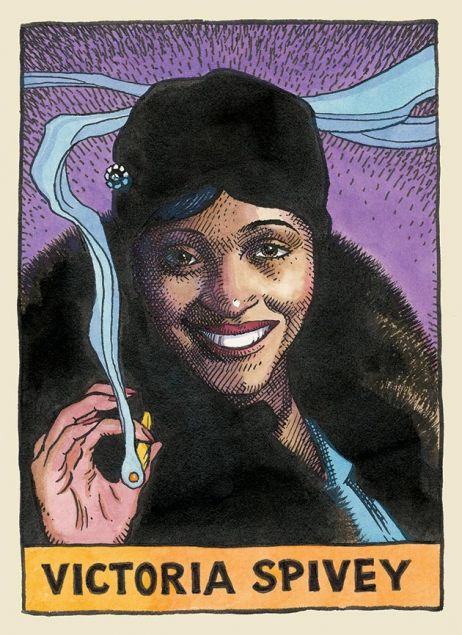 Victoria Spivey (October 15, 1906-October 3, 1976). Instruments: organ, piano, ukulele, vocals. Spivey’s lyrics were sexually provocative and drug related; she retired from the music biz in 1951 to sing and play in church before returning to the stage in the 1960s, when she founded her own label, Spivey Records. Recommended tracks: “Dope Head Blues,” “TB Blues,” “Black Snake Blues.” 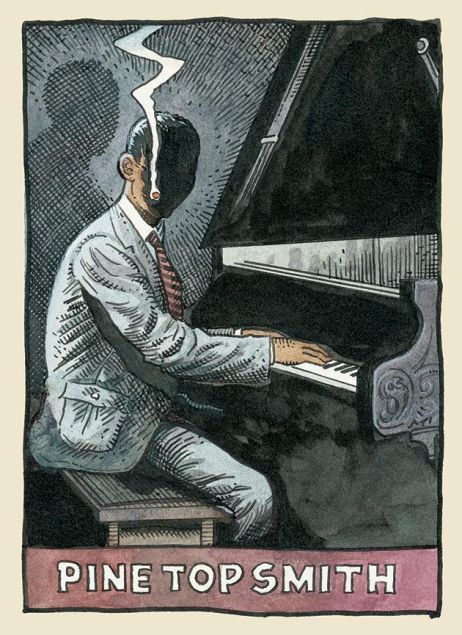 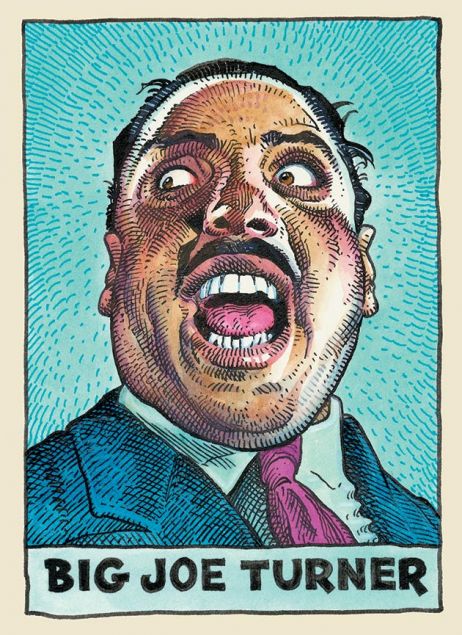 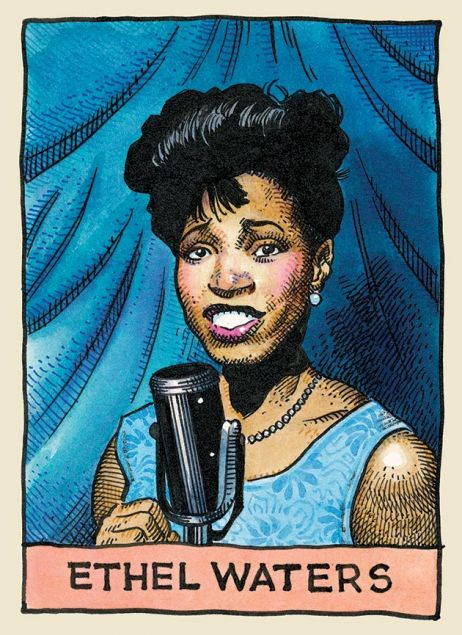 Ethel Waters (October 31, 1896-September 1, 1977). Instrument: vocals. A sought-after vaudeville performer and nightclub singer who then scored on Broadway and in Hollywood, Waters became the second-ever black actor to be nominated for an Oscar. Recommended tracks: “Heebie Jeebies,” “Am I Blue?,” “Down Home Blues,” “Shake That Thing,” “Maybe Not at All,” “Black Spatch Blues,” “Midnight Blues,” “Jazzin’ Baby Blues.” 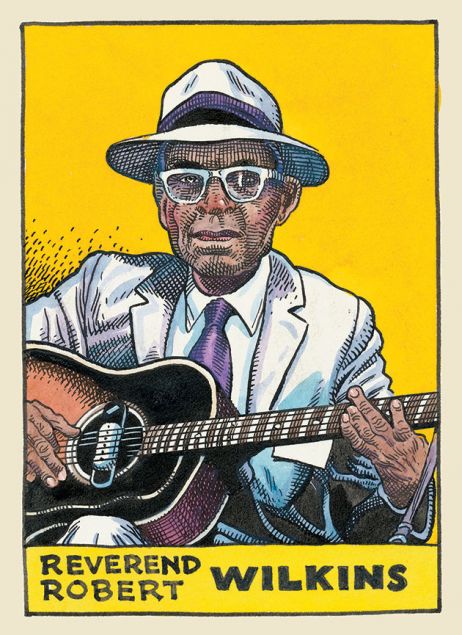 Reverend Robert Wilkins (January 16, 1896-May 26, 1987). Instrument: guitar, vocals. In 1935, deeply upset by violence at a party he was playing, Wilkins quit secular music to become a minister and an herbalist. Recommended tracks: “That’s No Way to Get Along,” “Rolling Stone.”