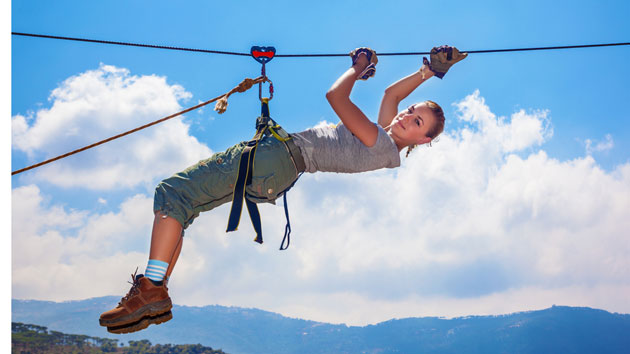 Girls need to get outside, get dirty, and make mistakes to gain skills needed later in life, says author and adventure-addict Caroline Paul. <a href=http://www.shutterstock.com/cat.mhtml?lang=en&language=en&ref_site=photo&search_source=search_form&version=llv1&anyorall=all&safesearch=1&use_local_boost=1&autocomplete_id=&search_tracking_id=v5J5WTq0KzywvHbJOXdwig&searchterm=girl%20outdoors%20brave%20rope&show_color_wheel=1&orient=&commercial_ok=&media_type=photos&search_cat=&searchtermx=&photographer_name=&people_gender=&people_age=&people_ethnicity=&people_number=&color=&page=1&inline=139096625>Anna Omelchenko</a>/Shutterstock

Caroline Paul frantically tried to get her ice pick to take hold in the slushy snow. Her friend had fallen into the bottom of an ice canyon and her other friend, strapped to the rope that held all three of them, was headed in the same direction.

Paul needed to anchor herself and pull them both up. But the unusually warm weather on Mount Denali prevented her ice pick from staying put. In those moments on the United States’ largest peak, Paul had to take everything she knew about climbing (very little) and everything she feared about dying (a lot) and set some priorities. 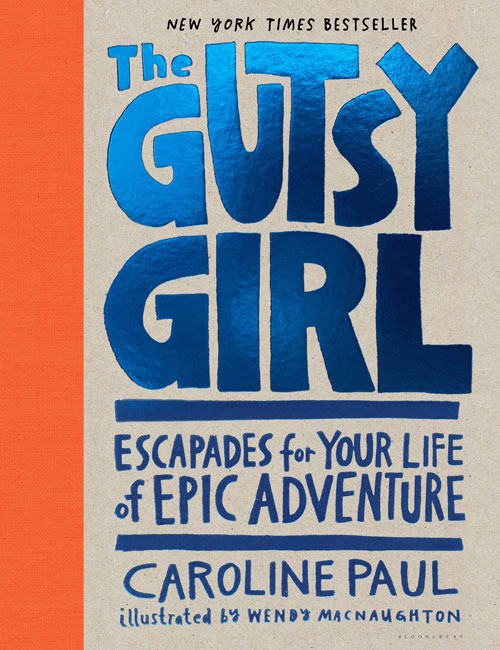 Caroline Paul calls her latest book the Lean In for girls, with cliffs, trees, and rivers. Bloomsbury USA

Before becoming an author, Caroline Paul worked as a firefighter for the San Francisco Fire Department. Photo courtesy CarolinePaul.com

Paul lived to tell the tale, and it’s become one of the 10 so-called “misadventures” that the scuba diver, paraglider, luge champion, pilot, and firefighter-turned-writer shares in her book.

The Gutsy Girl: Escapades for Your Life of Epic Adventure, isn’t as dramatic as it is thrilling, hilarious, and packed with tips on ways to practice bravery every day. The Gutsy Girl, published March 1, is for young girls but also has a message for parents: Stop telling your daughters to be careful.

We caught up with Paul the day before she went flying in an experimental plane she describes as “a hang glider with a go-kart underneath.” She talked about how we learn to be brave and why the outdoors is the best place to cultivate it. If we want our girls to grow into strong women, we’ve got to let them be gusty, she says.

Mother Jones: What made you want to write The Gutsy Girl?

Caroline Paul: Over the years I had seen that my female peers often said they were too scared to do something, and it struck me because often what they were talking about was not that big of deal, like picking up a bug and putting it outside, like going on bike rides. I didn’t think a lot about it until my friends who are parents lamented to me that their daughter was a real scaredy-cat. In watching her, I saw that her parents were telling her all the time: “Be careful,” “watch out,” “no,” “don’t.” I realized that it was the parents who were really anxious and fearful for her, and that was something she caught from them. I’ve noticed this more, not only with girls but with women. It seems to start at a very, very young age.

MJ: The Gutsy Girl is full of tales of scuba diving, paragliding, ice climbing, and even your eight-mile crawl around a track in an attempt to beat the world record. Not all of your stories are about your successes. How did you choose what to include?

CP: I picked 10 of my misadventures, and I’ve had more than that unfortunately, because it’s the misadventures that really teach the lessons that I want girls to learn. Lessons like bravery, resilience, camaraderie, decision-making, risk assessment, which is a boring word but so important. I feel really strongly that girls are not taught these things; they sort of pick them up as they get older in other areas that aren’t the outdoors. 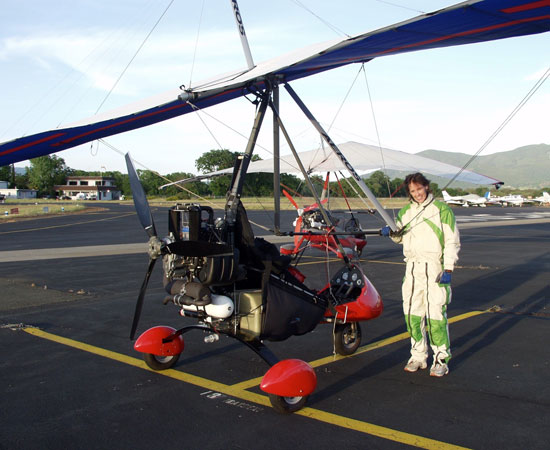 MJ: Why is that a great place for girls to be gutsy?

CP: The great thing about the outdoors is that it’s so obvious out there. When you’re standing on the edge of the cliff with your paraglider and you’re asking yourself whether it’s too dangerous, you’re going to assess your skills, you’re going to look at your fear, you’re going to access your confidence. All of that stuff is super important when we’re adults.

MJ: How can women be more brave in daily life, say, in the workplace?

CP: I often see women’s unwillingness to take initiative in things. First of all, men will do it for them and that really needs to change. I think we as women know that; I do it, too. But men have been taught for so long to try everything.

MJ: What do you recommend for girls who don’t have access to mountain climbing, ski trips, or other extreme activities?

CP: Adventure can happen super close to home. You don’t have to go to far-off countries and you don’t have to climb big mountains and buy fancy equipment at all. An adventure is getting on your bike with your friends; an adventure is hiking through a new park. It’s really about getting outside your comfort zone—then you have become successful adventurer.

MJ: Who are some of your heroes?

Elizabeth “Bessie” Coleman went to France to get her pilot’s license in 1920 when she wasn’t allowed into American flight schools. wikipedia commons

CP: When I was growing up, I didn’t have any. The only hero I knew of was Amelia Earhart; it seemed like she was the big exception to the rule. In other words, women didn’t do adventuring. But upon researching this book I realized there were a lot of women I could have been told about. My favorite is Bessie Coleman, a storm pilot and parachutist. She was African American and female, and since none of the flight schools would allow her to study with them, she went to France. Not only the fact that she wanted to fly back then (in the early 1900s), which is an obstacle psychologically as well as logistically, but then to face all that prejudice and all those naysayers and still do it? That’s the ultimate definition of gusty.

Caroline Paul says it’s not about being fearless, but learning how to manage the emotion. Photo courtesy Caroline Paul

MJ: What’s the hardest part about being gutsy?

CP: Managing fear, which I think a lot of girls and women don’t bother to do because we are infiltrated by this idea that we should be fearful. I’m seeing from other people just how deeply they feel that girls are more fragile than boys. What they’re not thinking about is that before puberty girls are actually stronger than boys, most of the time they’re ahead in terms of coordination and emotional maturity. But studies show that they are already inculcated with the idea that they could get hurt when they think about things like riding bikes. We teach them at such a young age that they are fragile. I hope that this book combats that.

MJ: How are you gutsy in your everyday life?

CJ: Well as a writer, just putting words on the page is such a heartrending and awful, soul-crushing experience. When you start with a book and tell yourself, really, you’re going to finish this, that takes all the life lessons you learn in the outdoors and you have to apply them. It takes bravery and it definitely takes teamwork. I applied a lot of these things. On more than one occasion, I remember Wendy (MacNaughton, who illustrated the book) looked at me and said, “Why aren’t you being gutsy about this?” And of course people call you on your own stuff and you have to knuckle down.

MJ: Anything gutsy you did recently?

CP: Recently when my dishwasher broke my first reaction was, “I can’t do this, I have to call one of my guy friends.” But the truth is, these days it’s all on YouTube—there’s nothing that any one of us can’t do. I fixed my own dishwasher and I felt smug. And great.

MJ: How can we ignore, or defeat, our fear?

CP: I’m not against fear. I think people think I’m fearless, and I’m not. I do believe it’s important that when you do feel fear you take it out and look at it, and then put it in it’s rightful place. What’s ahead is exhilaration and focus and anticipation—all these emotions that will make what you’re about to do super fun. The fear is just reflective, so put it where it should go, which is often the back of the line.

In the book I also encourage girls to practice acts of micro-bravery. The concept comes from Rachel Simmons, co-founder of Girls Leadership (in San Francisco). She says that bravery is learned, and so we need to teach ourselves and be taught it, and one way is by taking small steps. As you do those you start to learn so much about yourself, where your boundaries are, and what the feeling of fear versus the feeling of excitement is, because they often feel similar and chemically they’re similar. So by practicing daily acts of micro-bravery you’re teaching yourself how to recognize the difference between exhilaration and fear.

We have to start so much earlier teaching girls to stand up in the ways that women want to when they’re in the office. At work, it’s just so late by then.

MJ: Is your book sort of a “no boys allowed” space?