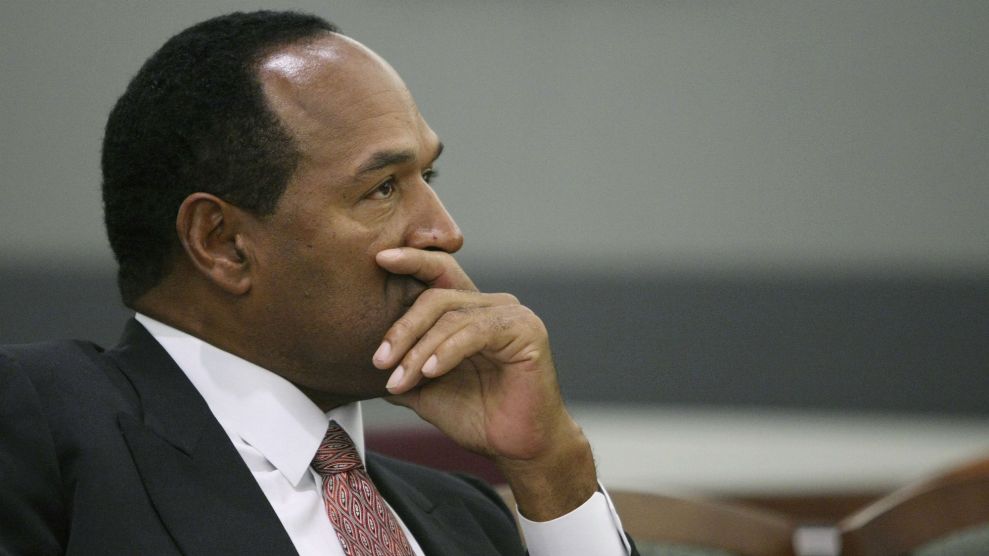 When filmmaker Ezra Edelman was a kid, he zipped through the airport and dodged other travelers just as O.J. Simpson did in his iconic Hertz commercials. He saw the charm in Simpson’s outsize personality—a product of San Francisco’s Portreo Hill, a rising star at the University of Southern California and in the National Football League, an actor, a broadcaster. When 1995 came around and Simpson was at the center of “the trial of the century” for killing his ex-wife Nicole Brown Simpson and her friend Ronald Goldman, Edelman was as shocked as everyone else.

The criminal trial ended in an acquittal; a 1997 civil suit found Simpson liable for the deaths of Brown and Goldman. But the man that emerged in the years since is a “much more challenging figure for someone to like,” Edelman recently told me. “Me, included.” (Simpson is currently serving a stint at Lovelock Correctional Center in Nevada for armed robbery and kidnapping from a confrontation with memorabilia dealers in Las Vegas in 2007.)

“It’s called Made in America, but I would as much call it Only in America.”

Edelman’s OJ: Made in America—a five-part, nearly eight-hour ESPN documentary that premieres Saturday night on ABC—goes beyond chronicling Simpson’s rise and steep fall. Bolstered by numerous interviews with everyone from Simpson’s childhood friends and the victims’ confidants to former LAPD detectives and members of both sides of the legal battle, the series offers a sweeping history of fame, racial tensions, and police brutality in Los Angeles leading up to and surrounding the Simpson trial. (It even broke some news this week when former LA District Attorney Gil Garcetti said the infamous Simpson-trying-on-the-glove moment “was never supposed to happen”—and that he learned new details about it from watching the film.) What arises, Edelman said, is a story about America, about Los Angeles, and about “how fucked up our culture is.”

Here’s what else Edelman had to say about Simpson, racial politics, and the trial’s significance today:

On the renewed interest in the trial: “There’s an unresolved nature to the whole thing that keeps people titillated. There’s this sense of, ‘Oh, all these people in America think O.J. is guilty of murder,’ but O.J. has steadfastly denied that he is guilty of murder. So until there is any sort of resolution, people will continue to be fascinated. And the fact that you’re dealing with someone who there’s a question of guilty and innocence in that way, but you’re also still dealing with this overwhelming titanic cultural figure who ends up being this titanically polarizing figure, I think that’s just one of those things. It’s called Made in America, but I would as much call it Only in America.”

On the significance of Simpson’s “I’m not black. I’m O.J.”: “O.J. considered himself O.J. above all. O.J. believed in O.J. exceptionalism, and he was not going to be defined by who he was as a black man or defined as black or somehow held back because of his blackness. So I think that’s what it means to me. In terms of where the story goes, that’s the story. That’s the irony. That’s what an audience has to arrive at on their own, to sort of live with O.J. and to explore who he was as a black man in America and then where he ends up both during the trial and afterward.”

On whether Simpson’s trial was a significant moment in racial politics or a test of celebrity: “I think it was both. I think it was a significant racial moment in a sad way, which I think speaks to the tragic nature of the story—that so many people invested in the character. As [Time writer] Sylvester Monroe said at the end of the film, “He wasn’t worth it.” That’s a little bit of the sadness of the story. But you know, it also was a defining and transformational media moment in our culture, and it speaks to the power of celebrity in terms of how people engaged him and not wanting to believe that this person was capable of the crimes he was accused of committing. Yeah, I think it was a significant thing, but was it the most important thing that happened? No. But it might have been the biggest.”