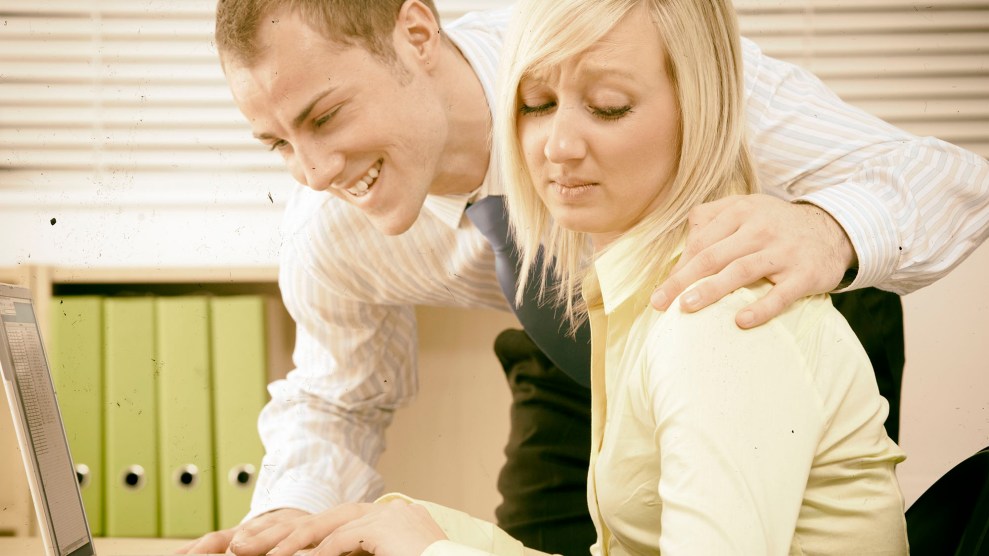 Employees at big companies are used to sitting through sexual harassment training. Whether it’s a video, an online quiz, or an awkward in-person session with coworkers, the lessons are pretty similar: There’s a rundown of harassment law and advice on what victims and witnesses should do, plus a few stilted (and easy-to-mock) examples of illegal behavior.

As more victims of sexual harassment come forward following revelations about Bill Cosby, Donald Trump, and Harvey Weinstein, employers may be asking what more they can do to protect their employees and themselves while preventing the company name from hitting the headlines.

Training is an obvious, and easy, answer. Yet there’s little evidence that trainings actually stop harassment.

While only three states—California, Connecticut, and Maine—require some private companies to provide harassment trainings, about three-quarters of companies do, according to an industry executive who spoke with Marketplace. Companies are willing to budget big money for annual trainings, because even rudimentary courses can help them avoid potential costly sexual harassment litigation by demonstrating to a court that they took steps to educate their employees.

In a major 2016 report, the Equal Employment Opportunity Commission’s Select Task Force on the Study of Harassment in the Workplace concluded that “much” of the training sold to companies has not prevented harassment, citing the high number of harassment allegations the EEOC regularly receives: 162,872 between fiscal 2010 and 2015. (According to EEOC commissioner Chai Feldblum, up to 85 percent of harassment victims never file charges with the body.)

“With an entire cottage industry of workplace compliance and training adopted and encouraged for 30 years, why does so much harassment persist,” Feldblum and Victoria Lipnic, the task force’s co-chairs, asked in the report. “After 30 years—is there something we’ve been missing?”

Researchers working to evaluate and improve trainings have trouble finding workplaces willing to allow access to their employees. All but a few scientists have had to settle for experiments that gauge the effects of trainings on small groups of study participants, outside the workplace. And while many researchers have measured employees’ attitudes about sexual harassment after training, it’s rare that they are able to look at training’s effect on behavior.

Some researchers have gone to extreme lengths to find out whether sexual harassment training can change how people act. For one 1998 paper, a team led by organizational psychologist Elissa Perry spent a semester examining the effects of harassment training on 36 male undergraduate business students. The researchers started at the beginning of the term by administering a quiz designed to measure the men’s “readiness to use power for sexually exploitative purposes.” (“Imagine that you are the news director for a local television station,” one question began. “You have to replace the anchor woman for the evening news…”)

In the middle of the term, the students were told they would be participating in an experiment on the effectiveness of different types of training. Sexual harassment wasn’t mentioned as the experiment’s real topic. First, a control group watched an instructional video on sign language. Others were shown a widely used anti-harassment video. Later, all participants were shown a second video on golf technique and were then instructed to teach a female undergraduate (really a confederate of the researchers) how to putt. Using secret recordings of their lesson, the 36 men, still unaware that the experiment had anything to do with measuring harassment, were scored on creepiness: how much and how often they touched the 22-year-old woman during the putting session, as well as how harassing their behavior was.

The study found that the anti-harassment video seemed to have worked for some participants, reducing inappropriate behavior among men who had done poorly on the sexual exploitation quiz. But when they were given another questionnaire at the end of the semester, the video showed no long-term effect on their attitude or values. (The video had no effect on men who had done better on the first quiz.)

University of Oregon associate law professor Elizabeth Tippett is deeply familiar with the limits of sexual harassment training. For a study published this month, Tippett analyzed 74 current and archival trainings, watching videos and slideshows and poring over written materials, looking for trends since 1980, when the EEOC issued its first guidelines on how companies should handle harassment.

Contemporary trainings, Tippett found, are too often “a hollow exercise in corporate compliance” that tend to emphasize that harassment is bad for workplace productivity while glossing over the point that harassment is a kind of discrimination—which she believes could serve a “moral anchor” to make the trainings more convincing.

Tippett warns that the trainings have come to “resemble a meal at McDonald’s.” Stilted scenarios reflecting outdated work environments—typically with women in low-ranking or secretarial roles—look more like outdated sitcoms than real life to viewers steeped in social media and reality TV.

Tippett prefers a more honest approach. She describes one training from the restaurant industry where managers were shown footage of testimonials by apparently real harassment victims. After interviewing the supervisors about how they would handle each situation, the videomakers then enlisted employment lawyers to critique their responses. “They were interviewing people in their actual workplaces,” Tippett says. “It just seemed to really contend with how these problems actually arise for people.”

The EEOC recommends that trainings include examples of troubling conduct that doesn’t rise to the legal standard for sexual harassment unless it occurs repeatedly, and Tippett indeed found that most trainings today include many examples of perfectly legal yet still objectionable behavior. But she cautions that showing too many examples of “borderline” sexual harassment could confuse employees and cause them to avoid potentially risky yet professionally valuable opportunities like after-work networking or informal mentorship over drinks. “The harassment training shouldn’t allow people to make the easy, convenient inference that they can avoid people who are different,” she argues.

As for format, Tippett says it’s best to let employees choose whether they’d prefer an online course or in-person session—a psychological trick to make them feel more invested in the content. Still, she prefers online, interactive programs for their potential to generate much-needed data on what works in a training. Online programs also allow trainers to customize the training content to each participant’s existing attitudes and knowledge, a classic move among public-health campaigners.

The EEOC, which has long offered anti-harassment and other trainings, recently established a new training program for employees and supervisors at both private companies and government agencies. It focuses less on examples of legally prohibited behavior and more on developing skills to handle harassment when it happens. Feldblum hopes the new approach will deemphasize “completely over-the-top” harassment examples that elicit predictable responses: “Everyone in the audience rolls their eyes and goes, ‘Of course we know that’s not okay.'”

The new program includes a role-playing exercise that casts employees in the roles of victim, supervisor, and a “coach” critiquing the supervisor’s response. Supervisors, Feldblum said, will be taught how to welcome complaints rather than dread them—as well as how to informally coach an employee on how to change problematic, but not yet illegal, behavior. “It’s giving folks a sense of what is the correct thing to say or to do,” says Feldblum.

The new EEOC training also draws on lessons learned in the fight against campus rape, where “bystander intervention” training has been deployed to encourage participants to feel collectively responsible for stopping sexual assault, and to take action to do so. “The frat party thing is to distract the guy who’s trying to take the girl up the stairs,” Feldblum says. “In the workplace, maybe you’re around a lunch and one guy starts making all of these horribly sexist or sexual comments to someone else. It might be intervening and moving the conversation somewhere else, and then afterward going up and talking to that guy.”

Still, Feldblum acknowledges that no training can stop harassment on its own—especially if companies lack clear harassment policies, information on how often it happens in their offices, and corporate leaders who take the problem seriously. And while there are preliminary plans to start collecting data, the EEOC doesn’t yet have measures in place to figure out whether its new training program, which launched in early October, will be more effective than past programs.

“We are hopeful that it will work,” Feldblum says. “But even if it’s the best training ever that we go in and do, the organization is not going to make a dent if they don’t have all the other components in place.”