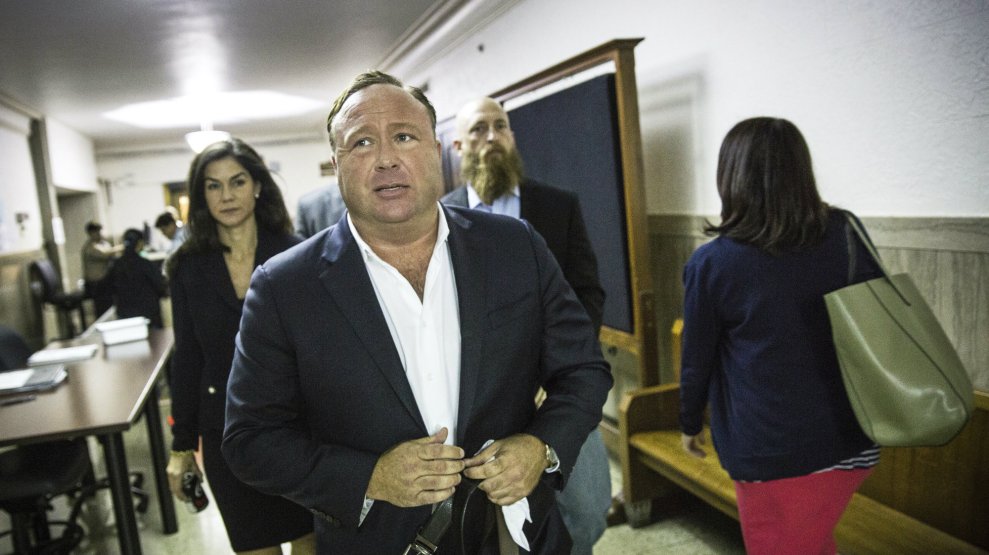 Two former staffers at InfoWars have accused founder and right-wing conspiracy theorist Alex Jones of discrimination and sexual harassment, the Daily Mail reported on Wednesday. Jones allegedly bullied staffers, made anti-Semitic and racist comments, and groped one worker, according to two Equal Employment Opportunity Commission complaints obtained by the publication.

Rob Jacobson, a former video editor who worked for the site for 13 years, alleges his co-workers and managers called him “The Jewish Individual” and “The Resident Jew,” and that Jones regularly humiliated and belittled him. As the Mail reports, “The abuse got so bad that one member of staff photo shopped Jacobson’s face on to the image of an Orthodox Jew under the words ‘THE JEWISH INDIVIDUAL DEMANDS YOUR HOT TOPICS’ and printed it out for all to see.” Jacobson, who was eventually fired, is planning to sue Jones for discrimination, harassment, and unfair dismissal, in addition to his EEOC complaint.

Meanwhile, Ashley Beckford, a former production assistant for InfoWars‘ parent company, Free Speech Systems, alleges Jones “often spent his time shirtless, and endlessly leering…at female employees and guests,” which created a “disgusting, hostile environment” that openly encouraged his staff to make inappropriate comments toward women. According to the EEOC statement from Beckford, who is African American, Jones made unwanted sexual advances and allegedly groped her while commenting, “Who wouldn’t want to have a black wife?”

In a lengthy statement to the Daily Mail, Jones denied the claims, calling them “no reflection of reality” and “completely, totally false.”

Read more of the disturbing allegations over at the Daily Mail.