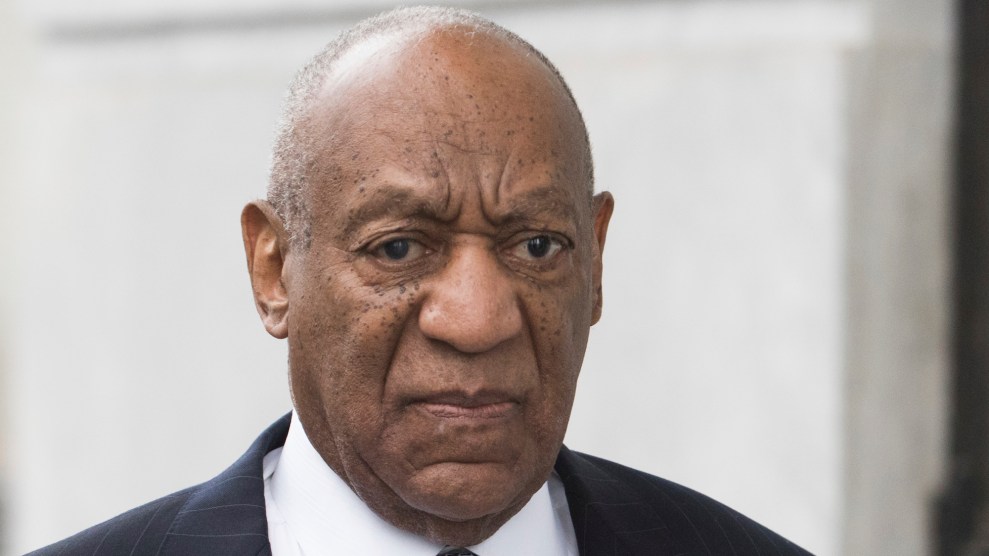 Ten months ago, when the jury in Bill Cosby’s sexual assault trial deadlocked, it seemed possible that the court system might altogether fail the more than 50 women who have publicly accused the comedian of sexual assault or harassment. But that was before #MeToo changed the game for women making claims against powerful men—and before Cosby’s judge decided, in March, that more women should be allowed to testify against him.

As jury selection in Cosby’s retrial begins this week in Norristown, Pennsylvania, the 80-year-old comedian is still facing charges in just one case: that of Andrea Constand, a former Temple University women’s basketball official who has accused him of drugging and sexually assaulting her at his home in 2004. The first time Constand’s case was tried, the judge permitted only one additional woman to testify about being assaulted by Cosby, to show a pattern in how he had targeted his victims. But this time around, prosecutors will be allowed to call to the stand five accusers in addition to Constand—all of whom have eerily similar allegations about Cosby drugging and molesting them in the ’80s.

“The fact that there are 50 other accusers really does lower the odds that he’s innocent of this crime, in a very substantial way.”

That’s thanks to an unusual, highly-contested legal principle known as the “doctrine of chances.” Prosecutors filed a motion invoking the doctrine earlier this year, arguing that in this case, the judge should make an exception to the rule that juries can’t consider “character evidence” of past crimes when weighing a conviction. “As the number of victims reporting similar, drug-facilitated sexual assaults by [the] defendant increases, the likelihood that his conduct was unintentional decreases,” prosecutors wrote. “It is simply a matter of probabilities.”

So what is this math-driven theory that will give more Cosby accusers a day in court? To get to the bottom of it, I nerded out with Wes Oliver, associate dean at the Duquesne University School of Law and an expert on criminal law and procedure, who’s written an academic paper on exactly how this principle applies to the Cosby case.

Wes Oliver: Our normal rules say we don’t consider a defendant’s bad character. The doctrine of chances is a very rarely invoked exception. It says that we allow character evidence—if you’ve got enough instances. The example that’s used in a textbook is you have a guy who’s accused of drowning his wife in the bathtub, and his five previous wives all drowned in a bathtub, and you want to introduce this evidence. Well, the doctrine of chances would say it’s pretty rare to drown in a bathtub. Maybe it happens once, but when it happens four times, we ought to be able to consider this.

Mother Jones: Are there people out there actually measuring the odds of six wives all drowning innocently in the bathtub?

WO: Good grief, no. There’s no way to calculate this.

MJ: So it’s just common sense—that 50 accusers are more credible than one accuser.

WO: The words “common sense” are exactly right. With regard to Cosby’s case, the fact that there are 50 other accusers really does lower the odds that he’s innocent of this crime, in a very substantial way. If the odds are overwhelming that he’s lying about his innocence, or lying about consent, then maybe we ought to hear from some of them.

This was Cliff Huxtable. The Pudding Pops Man. This is a guy that the jury would naturally tend to want to believe.

MJ: But the judge is only letting five additional Cosby accusers testify this time. Last time, he only let one. Why not 50?

WO: Right. Here’s the thing: The fact is, we still want the jury to make the decision on the basis of its interpretation of her credibility versus his. We don’t want them to convict him of assaulting Andrea Constand because they believe he raped 50 other people. This other evidence is offered to inform our understanding of his credibility.

Now, the fact that there are 50 accusers means that we’re probably not getting this wrong by letting some of the accusers testify. But if you let 50 testify, then the odds that the jury would actually then listen to this particular case are almost nil. The jury would go, “Oh, he did 50, who cares if he did this one or not.” The fact there are 50 accusers makes us comfortable, I think, in admitting some of them.

MJ: That’s different, say, than the Larry Nassar trial, where more than a hundred victims spoke up in court—because that was during the sentencing. But this is all about informing the jury’s decision?

WO: Right. Now, here’s the real wrinkle to this: Last time there was one. This time there are five. I don’t understand—what new has happened with the case since then? The answer is nothing.

What new has happened with society since then? The answer is quite a lot.

It seems to me with the whole #MeToo movement, society seems more willing to believe an accuser, even an accuser of a very important man. It seems to me that there’s less of a need in this case to hear from other accusers than there was at the last trial. The Harvey Weinstein tide had not turned at that point, and there still seemed to be some reluctance among people to believe women who accuse powerful men.

MJ: Last time, prosecutors argued they should be allowed to include other accusers because it showed that Cosby had a “common plan or scheme.” This time, they argued the doctrine of chances. What’s the difference?

WO: In essence, it’s one of numbers. If every time he goes to rape a woman he offers her an aspirin, and he does that two or three times, well, then it looks like a common plan or scheme. If he does it 100 times, then we can really say, “What are the damn odds he wasn’t doing it this time?” The doctrine of chances just considers the number of instances a little more than “common plan or scheme” does.

MJ: How much did it matter that prosecutors used the doctrine of chances argument this time around?

WO: It shouldn’t really matter. This was Cliff Huxtable. This was the character from Captain Kangaroo, beloved star of children’s shows and such. The Pudding Pops man. This is a guy that the jury would naturally tend to want to believe. All of that was true before.

So the judge balanced it and said, “Look, they’re entitled to hear some information, but if they hear more than this, it might prejudice them so they’re no longer really listening to this case.” That same fundamental balance is going on no matter whether you use doctrine of chances, or if you use “common plan or scheme” as they used last time.

MJ: Could it be the judge’s mind changing as a result of #MeToo, and him thinking, “Oh yeah, more women’s voices should be heard in court”?

WO: You’d hope not, because the role of the judge is not to provide a venue—it’s to provide a fair trial. If that’s the calculation that’s being made, then the judge himself would be putting the thumb on the scale differently as a result of the movement. If that’s what’s happening—and I’m not saying that it is—that would be problematic.

If every time he goes to rape a woman he offers her an aspirin, and he does that two or three times, well, then it looks like a common plan or scheme. If he does it 100 times, then we can really say, “What are the damn odds he wasn’t doing it this time?”

MJ: If I’m the Cosby prosecutor, and I invoke the doctrine of chances, how thoroughly do I have to prove that the previous incidents actually happened?

WO: You have to prove that a jury could have found that these things were true. You don’t have to prove it beyond a reasonable doubt, or even to a preponderance of the evidence, [but] it can’t be 50 harebrained stories.

MJ: And if I’m the defense attorney, how do I defend against all the extra accusers?

WO: If you can show that the stories aren’t credible, if they look like, “Wait a second, these things all are a little too similar,” or there’s some real credibility problems with each one of these witnesses, then you’ve got the same kind of arguments you always have. “You shouldn’t admit these, Judge, because they don’t seem to bear the indicia of reliability.”

Also, one of the things you ought to also know is the doctrine of chances is not universally accepted, by a long stretch, in American courtrooms.

Look at federal rule of evidence 404(b). 404(b)(1) says character evidence is not admissible to prove propensity or conformity with the character. 404(b)(2), however, says “…unless that evidence goes to show intent, motive, absence of mistake, etc., etc., modus operandi, common scheme or plan.” Well, those things tend to swallow up the rule itself.

The doctrine of chances says, “We’re letting in character evidence, let’s just be honest about it. But since we’re doing that, let’s only do it when the odds are really good that if he did this past stuff, he did this current stuff.”