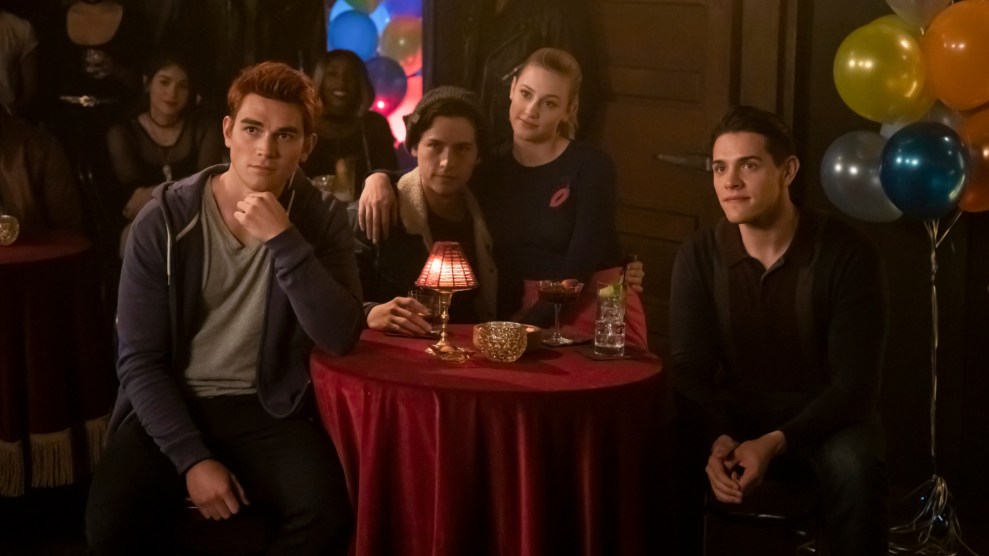 Since its 2017 premiere, Riverdale, which wrapped up its third season last night, has transformed from season 1’s campy teen drama into a darker soap opera, with some film noir elements thrown in for good measure. The CW hit features storylines about cults, serial killers, private prisons, a drug war, and plenty of steamy romance, all through the decades-old characters that Gen Xers (and Boomers, for that matter) may remember from the comic strips: Archie Andrews, Betty Cooper, Veronica Lodge, and Jughead Jones.

Riverdale‘s reinvention is thanks to nearly a decade of work by Archie Comics co-CEO Jon Goldwater, who is the son of the company’s founder, John L. Goldwater. He spearheaded the brand’s venture into the television universe, serving as an executive producer on Riverdale, Chilling Adventures of Sabrina, and soon, Katy Keene, a musical dramedy and Riverdale spinoff coming to the network this fall.

Mother Jones spoke with Goldwater about the 80-year-old company’s legacy and how he’s reviving the franchise for a whole new generation of fans.

Mother Jones: Did you always know you would end up working at Archie Comics? What was the first thing you worked on at the company?

I came in very wide-eyed and bushy-tailed expecting that everyone would love Archie as much as I love Archie. It really was a little shocking to me that in the pop culture zeitgeist, Archie had kind of fallen away. People weren’t really aware that he was still around and that we were still publishing comic books. The brand had gotten a little neglected. My first order of business was to fix the publishing—to make it relevant and contemporary, and not live in a bubble that may have been relevant many years back.

MJ: Archie Comics for years adhered to regulations established by the Comics Code Authority, which limited the use of sex, drugs, and violence in comics. Now, these are all things that we consistently see in the Archie universe. Did you plan to go in this darker, more subversive direction?

JG: We really started to change back in 2010 when we launched Kevin Keller. One of our artists came to me and said, “You know, I think we need to put a gay character in Archie. We need to speak to the times.” People just so embraced that character and embraced the new direction that it really filled me with a sense of hope.

What’s happening in Riverdale and what’s happened in our current comic books is we’re speaking to young people and their lives. These stories are still about family, they’re still about friendship. So even though it’s a heightened version of all that in the TV show, that’s really the bedrock of what Archie was founded on almost 80 years ago.

MJ: Several plotlines on Riverdale touch on current political issues—specifically, I’m thinking of Hiram Lodge’s ambition to build a private prison in Riverdale, which I wrote about last year for Mother Jones. How did the Riverdale team approach these subjects?

JG: We just want to tell true stories. It started many years ago in our comic books—we did a Riverdale issue in 2011 featuring [former President Barack] Obama and [former Alaska Gov. Sarah] Palin.

Society is very politicized and it’s very divided and it’s causing a lot of stress—not just in the country, but within families. We attack all these issues, whether it be the Hiram and the prisons or drugs, with fearlessness. But most importantly, we want to tell a great story. We want to tell a true story. And we want our characters to reflect what’s going on in the real world.

Our motto with Archie is “bend it, don’t break it.” Stay within the DNA of what the characters are. And I believe that these brilliant writers on our show have been able to expertly achieve that.

MJ: Roberto Aguirre-Sacasa, who is the chief creative officer of Archie Comics and Riverdale showrunner, has been a big influence on the universe. What’s your relationship with him like? How do you strike a creative balance?

JG: If there’s anyone on the planet who loves these characters as much as I do, it’s Roberto. And I must tell you, there are times where he’s pushed it, and I’ve gotten a little, “Uh oh, are we going too far?” And he said to me, “No, no, no, it’s going to be fine. Don’t worry about it.” And he’s been right.

I give him all the credit in the world for really pushing this thing. He’s done a brilliant job of doing that.

MJ: Back to the comics. Archie Horror, an imprint of Archie Comics, really pushed the franchise forward—it gave us Chilling Adventures of Sabrina. Can we expect any other Archie Horror adaptations? The superhero imprint, perhaps?

JG: We have a really wonderful group of great properties to mine, and we’re going to do that without a doubt, so I’m very excited about that. We have nothing immediately happening just yet, but it has been discussed.

As far as the superhero world goes, we’re working on something with the Shield comics right now. Our superhero properties are always at the forefront of our mind.

MJ: We’ve talked about some of the risks the shows have taken and how they’ve deviated in tone from the comics. Archie is such an institution, and it’s been around for so long. Have you ever received any pushback from traditionalists?

JG: I have—I mean, amazing pushback. When we first started going down this road of messing with tradition, so to speak, everyone was saying, “Jon doesn’t know what he’s doing. Why is he messing with a tried-and-true formula?”

But you have to adapt with the times. You can’t just be recklessly fearless—you have to be fearless with a plan, and we were. And so yes, people were upset. I’m quite certain a lot of those people are still upset. But if they want their dose of traditional Archie, they can buy it! We’re still doing those stories. The old-school Archie still exists. We haven’t stopped publishing it. But it’s not our focus right now—our focus is moving the company forward.

As much fun as it is to tell the stories we’ve told for the last 80 years, it’s just as much fun, if not a little more fun, to tell these new stories. It’s been rewarding to know that people love these new stories with these same characters, so it feels really good that even though we did take a risk, people are enjoying where the company is right now.