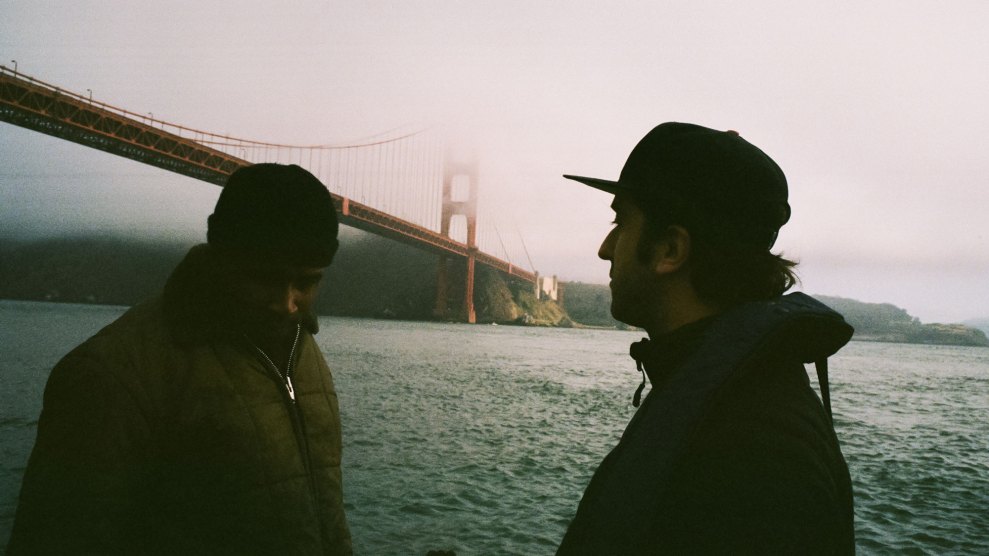 Around the bend of Bernal Heights Park, along the path they used to walk as teenagers, Joe Talbot and Jimmie Fails marveled at the scene before them: a trio of people contorting their bodies on yoga mats on an edge overlooking the stark high-rises of downtown San Francisco, the Salesforce Tower rising like a monstrous gherkin in the distance. I’d just asked Talbot and Fails what had changed in the city since their youth, and it was as if San Francisco had decided to answer the question for them.

“It couldn’t have been better timing,” Fails said as we walked past a pair of exotic-looking dogs. “I’ve never seen that in my whole life.”

Talbot, who is white, is the director of the Sundance darling The Last Black Man of San Francisco, and Fails is the black man whose life, lightly fictionalized, is the subject of the film. More broadly, the movie is about the black people who’ve been gentrified out of the city over the past half-century, so that scenes like the one we witnessed on Bernal Hill might proliferate.

Did the yogis know they were on charged ground? It was here that four San Francisco cops shot and killed Alex Nieto, a 28-year-old security guard, on March 21, 2014, months before national protests against police brutality erupted over the killings of Eric Garner, Michael Brown, and Tamir Rice. The events leading to Nieto’s death had been set in motion by a tense encounter he’d had in the park earlier that night with Evan Snow, a thirtysomething “user experience design professional,” who was walking his Siberian husky. The dog had cornered Nieto, who—according to Snow—took out the Taser he carried for work.

“That death doesn’t feel like it happens in old San Francisco,” said Talbot, who is 28.

“Some people might say it’s death by gentrification,” Talbot said.

In his directorial debut, Talbot, a fifth-generation San Franciscan, tells of his friend Fails’ pursuit to regain a childhood house in the Fillmore district with his friend Montgomery, played with quirky warmth by Jonathan Majors. The film, which debuted over the weekend, shows the richness and eccentricity of the culture that made San Francisco—the street serenades, the sights and sounds of the Bay, the fleeting moments in which one finds oneself sitting at a bus stop in the Castro district with a naked guy.

In one scene, Fails and Montgomery meet with a white real estate developer to talk about the house. The developer tries to level with them as a fellow San Franciscan who happened to go to the same private school as California Gov. Gavin Newsom. In another scene, two women on a bus snarkily bemoan living in San Francisco and quip about moving to East Los Angeles, prompting Fails to say, “You can’t hate it unless you love it.” At one point, a fleet of tech bros ride a street car in the Castro, the city’s vibrant LGBTQ neighborhood, while Fails waits with the naked old guy—a vision of wrinkled old San Francisco getting heckled and passed by.

“Jimmie and the naked guy are two great San Franciscans. The new people are treating the city like a playground,” Talbot said. “That’s not everybody, of course.”

Decades ago, San Francisco’s Fillmore district, the setting of much of the film, was known as the “Harlem of the West,” bolstered by its thriving jazz scene. By 1970, African Americans like Fails, Montgomery, and many of the film’s ensemble cast made up more than 13 percent of the city’s population. “Urban renewal in the ’60s, that’s early gentrification,” Fails said. “That’s specifically pushing black people out, bulldozing their homes.” Today, with a mass exodus to the suburbs because of rising housing costs, African Americans make up just 6 percent of the city’s population, many of them living in public housing projects.

We crossed a pile of rocks with a handful of flowers mixed in, the former site of an unofficial memorial for Nieto, and walked down a steep trail along the edge of the park. Talbot and Fails pointed out a luxurious white house with pink walls painted with fish and a finger poking the eye of a gray shark. Before that white house was erected, the olive house next door used to be the tallest on the street. “That’s old Bernal, and that’s new Bernal, right next to each other,” Talbot said. We stroll past what used to be the Army Street Projects, where Fails lived for four years with his father, played in the film by Rob Morgan, before Fails moved to a group home.

“Every day, it’s something new, like, ‘Oh, this is closing down? Fuck. This is burning down mysteriously?'”

Talbot and Fails would see each other around the neighborhood as teenagers and hang out with friends at nearby Precita Park. They would climb Bernal and drink and smoke just like kids do. When they filmed The Last Black Man, Fails lived at Talbot’s family home. (“You can have a movie where Brad Pitt is the producer and live at home. That’s as San Francisco as it gets,” said Talbot, who grew up in a family of creatives. His father, David, is a journalist and founder of Salon who used to be a senior editor at Mother Jones. His mother was a founding editor of the Mothers Who Think website.) Getting The Last Black Man made was a grassroots affair. They developed a concept trailer and raised money through a Kickstarter.

What they wound up with is a movie that, like its central character, wants badly to reclaim a home. After his family fell into financial disrepair while he was in elementary school, Fails lost the Victorian house that his grandfather had bought. That eviction changed his life. He still lives in the city, and he said he feels numb toward the changes he’s noticing. “I mean, it sucks but I’ve been seeing that for years. It’s just happening more and more,” he said. “Every day, it’s something new, like, ‘Oh, this is closing down? Fuck. This is burning down mysteriously?'”

As we walked through their old neighborhood, Fails and Talbot marveled at the little things: the fact that Danny Glover, who plays Montgomery’s grandfather in the film, was born in the same hospital as Fails; that they spotted San Francisco Giants legend Barry Bonds talking with Glover at their recent premiere at the Castro Theatre.

Fails wanted to stop for a smoke at the stoop of another house along the walk in the Mission district. “That doesn’t happen anymore,” he said. “I remember when gentrification first started happening, we would always stoop. That was a big thing when I was a teenager. I remember one day, every stoop we sat on, the person was like, Oh, yeah, no, you guys gotta [go]. It happened like five times in a row, and we were like, What the fuck?” In old San Francisco, Fails reminded me, if people weren’t okay with you smoking in front of their place, they would tell you not to smoke—but they still would let you chill on their stoop.

Change had hit even the sites where they filmed: Montgomery’s house in Hunters Point stood alone in the film, with vacant lots on either side. But now, a year after filming, a house stands next door. There are, Talbot told me, “million-dollar condos at the end of the street, which, for the longest time, was a toxic dump site.”

After Fails hopped in a car to meet with his father before yet another screening, Talbot took me to the street in the Mission where they found the towering white Victorian that serves in the film as the Fails’ family house. The actual house Fails lived in for a time was miles away, in the Fillmore. As we looked across the street from Fails’ stand-in home, I wondered aloud why Talbot and Fails so often describe San Francisco in terms of old and new. The two friends are only in their 20s, after all. Have the processes shaping the city so accelerated that even twentysomethings can sense the San Francisco of their teenage years slipping irrevocably away? Has change itself changed?

“The differences are so stark that it doesn’t feel like it was. It feels like…” Talbot said, pausing for a few seconds, his thoughts slowing down, “…two very different things colliding with each other. It’s just natural to growing up here. There are things that feel so specific to the past, to the memory of what it felt like to grow up here. The new symbols of change can feel like they’re coming at the cost of our regional culture, which is what defines us. If we don’t have our culture as San Franciscans, then what are we?”

So, what are they? I asked, as cars roared past us.