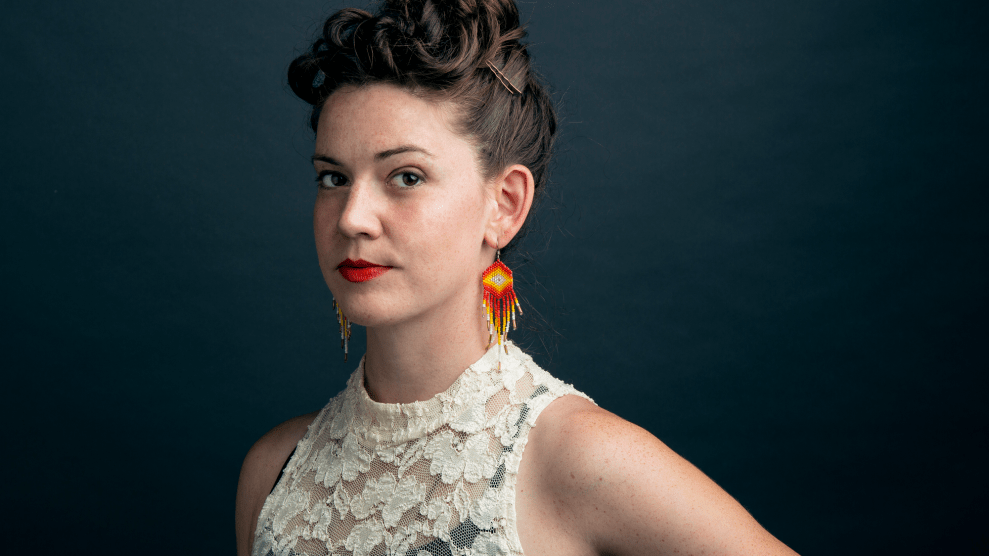 “The Supreme Court case no one is talking about” began with a murder. It could end with 43 percent of Oklahoma’s land being returned to tribal governments. In a way Carpenter v. Murphy encapsulates the larger history of Native dispossession—a story of bloody violence dissolving into lawsuits and hearings. The great accomplishment of This Land, the podcast about the case hosted by charismatic Cherokee journalist Rebecca Nagle, is that it never loses sight of the human lives at stake in the dry legalese of today’s tribal relations.

In 1999, Muscogee Creek citizen Patrick Murphy killed his girlfriend’s ex-husband and cut off his genitals. He was sentenced to death by the state of Oklahoma. His lawyers argued that the state didn’t have jurisdiction to prosecute the crime, because it took place on his tribe’s reservation. But does that reservation actually exist? That’s the question at the heart of Carpenter v. Murphy, which the Supreme Court punted on this past term and will rehear in the fall.

The Muscogee Creek were given 3 million acres in 1866, but the state of Oklahoma gradually ceased to recognize the tribe’s sovereignty over that land. If the Supreme Court concurs with an appeals court’s ruling that the reservation was never formally abolished, then the same might be true for the reservations of the Cherokee, Choctaw, Chickasaw, and Seminole. As much as 19 million acres could be returned to the “Five Tribes” who were forced West on the Trail of Tears.

Nagle knows this history intimately. Her great-great-great-grandfather, John Ridge, signed the 1835 treaty that removed her tribe to Oklahoma, a decision for which he and his father were later assassinated, and which remains controversial within Cherokee Nation. “Their sacrifice is part of why I personally care so much about this case,” Nagle tells Mother Jones. “Part of the land that is at stake is land that [my ancestors] gave their lives for. So Cherokee Nation would never be without a land base, and never be without a sovereign government.”

Nagle recently got on the phone with me to talk about This Land, which is produced by Crooked Media with a bevy of Native collaborators. We talked about the case, the postponement, and the role of “invisibility” in the ongoing subjugation of Natives by seemingly nonviolent means.

There’s a part in the podcast where you say, “You’re used to hearing how tribes lost land to arrows and guns. I’m going to tell you how my tribe lost land to bureaucracy and corruption. And in some ways, it’s even more infuriating.” How does that tie into this case?

Basically, the way the law works is that for a reservation to no longer exist, Congress can just say, “We hereby declare this piece of land no longer belongs to the people that we said it belongs to.” The question [with the Muscogee Creek nation] is, did Congress ever do that? And they did do a lot of things like that. They said, “You guys can no longer have your court systems, you can no longer operate your own schools, your tribal government can only meet to discuss allotment—basically this system of dividing up your land that we’re literally forcing on you.” But they never terminated or abolished the reservation.

Allotment was a system created to take our land away from us. It was supposed to help individual Indians accumulate personal wealth, but really, it divided up our land and made our citizens more vulnerable to white theft. There was an entire industry that arose in Oklahoma around stealing Indian lands. Indians could be appointed a white guardian, and then that white guardian had control of their land. Even orphans were appointed guardians, and people preyed on Indian orphans. Between 1877 and 1934, tribes lost two-thirds of our land, 90 million acres, to allotment. It literally redrew the map of the United States.

I think about what happened to my tribe after the Trail of Tears, which was tragic. But we also recovered from it, because we had a land base here in Oklahoma. We very immediately re-established our schools, our court systems, [and] our self-governance. It wasn’t without a huge amount of loss, but we continued to have those things. What’s hard about allotment is that it has never stopped. The small handful of families that still have restricted land, if they ever sell that land, or a relative dies and they don’t probate it correctly, that stops being Indian land. So we’re still losing jurisdiction over that land, we’re still losing sovereignty. And I think some in some ways we’ve never recovered. Since allotment, Cherokee hasn’t been taught in schools, and now we’re in a place where our language is endangered.

You’ve written that “invisibility is the modern form of racism against Natives.” Does the changing nature of land dispossession reflect that?

It has a huge impact on our rights, that whenever these issues are up in front of the Supreme Court or Congress, they’re not usually discussed outside of Indian Country. It’s really easy for lawmakers to not do the right thing, when there’s no public pressure and no public accountability. Oftentimes our cases and our treaty rights are being heard in courts. The general public doesn’t understand the very, very basics of tribal sovereignty, but it’s at every level. A lot of judges don’t know a lot about federal Indian law. Or even people in Congress. We have a lot of people who are making the decisions that directly and deeply impact our lives, who don’t really understand a lot of the basics about how the law works.

What always happens when we talk about tribal sovereignty is this specter of fear—tribes being kind of backward, being inferior. Like if we have more power in the state of Oklahoma, it would just be really detrimental to the people who live here and would tear the state in two. [But] the Five Tribes that we’re talking about actually have a lot of resources, in a state that’s pretty cash-strapped. Our tribes are actually filling in the gaps, for where the state can’t keep a hospital open, can’t provide public services. Our police are cross-deputized, and are helping patrol and promote public safety in rural areas. So to say that it would be bad for [the jurisdiction] to switch is really unfair, when you look at what’s happening on the ground.

Can you say more about what sovereignty looks like for the Five Tribes today?

You can think of sovereignty sort of as a box. We used to not be in a box. We used to have this whole continent, but now we have this little box, a place where we can keep our citizens safe, where we can practice our culture, where we can promote our language, where we get to self-govern. And then what happens, over and over again, is either that box gets smaller, or the United States says, “You know what, we gave you that box, but now we changed our mind, and you don’t even get that box.” When we don’t have that kind of protective barrier, it’s harder for us to maintain our way of life. Sovereignty, I think, is synonymous with self-determination. That’s us being able to govern ourselves, on our own terms, on our own land.

Oklahoma public schools still do these “land rushes,” where the kids literally dress up as settlers with little wagons and stake out their claim of the land to re-enact the Oklahoma Land Rush. The violence with which Indian land was taken was how Oklahoma became a state. And that history’s still being celebrated. Look at the musical, Oklahoma!—what’s happening at that moment is that Indians are being dispossessed of our land.

Oklahoma was “Indian Territory” for a long time. We were removed from our homeland and put in Oklahoma. Then eventually, people wanted that land, too. It happens with treaty rights all the time, like with DAPL [the Dakota Access Pipeline]. The small slivers of sovereignty that they left for us, they don’t even respect that.

In a rare move, the Supreme Court recently deferred ruling on Carpenter v. Murphy and will hear it again this fall. What does that postponement mean for the case?

What makes me hopeful about the postponement is that I think it’s more time to explain and to debunk the myths that Oklahoma brought up in oral arguments–more time to educate the justices about, what does it really mean if [they] affirm the reservations? What does that mean for business regulations? The legal question that the case presents is pretty black and white: Did Congress ever disestablish this reservation? The 10th Circuit Court was very clear that Congress never did that. They wrote a very lengthy, thorough decision. So this is the decision the Supreme Court has to make: Are they going to follow the letter of the law? Or are they going to bend it to appease non-Native interests?

The final episode of This Land will be released Monday through Crooked Media.