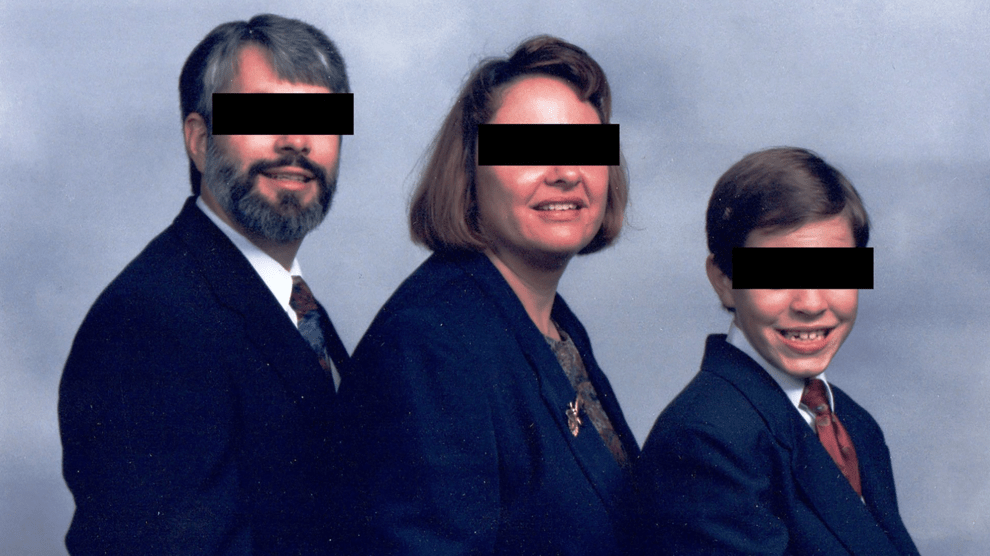 In September 2009, Matt DeHart says he found some curious files on a dark web server he maintained as part of his association with Anonymous, the loosely affiliated hacktivist collective that came to notoriety over its attacks on the Church of Scientology. The files, which he later claimed showed evidence of the FBI investigating CIA involvement in 2001’s anthrax mailings, spooked him. He says he saved screenshots of some of the most incendiary on thumb drives and deleted the rest.

A few months after finding the files, police raided the Indiana home he shared with his parents, seizing computers and hard drives. DeHart briefly fled to Mexico, only to return home a few days later.

Meanwhile, authorities in Tennessee were already investigating allegations DeHart, then a 25-year-old former National Guard soldier who had worked on drone missions, had tricked a 14-year-old and a 16-year-old into sending him explicit photos and videos in 2008. When DeHart was eventually hit with child pornography-related charges, he and his family claimed they’d been brought as part of a plot to get the files back and paint him as a spy or Wikileaks courier.

Enemies of the State, a new film directed by Sonia Kennebeck, details her own three year-plus investigation into DeHart’s story, and the claims that helped make him, depending on your point of view, either a political prisoner persecuted for knowing too much, or a classic sex offender. While it presents plenty of twists, turns, and revelations, it largely leaves it to the audience to decide who DeHart is.

For a decade, DeHart’s wild tale—which includes attempts to defect to Russia and Venezuela, a Canadian asylum claim, evidence of drugging and torture at the hands of federal agents, and a 2015 guilty plea to possessing child pornography and imprisonment—has largely flown under the radar. That’s been the case even though it touches on some of the era’s major story lines: the Obama crackdown on whistleblowers, the moral rot of the US drone program and its toll on the service members who execute its missions, and the ways in which what we see and hear online is a faint version of a far more complex, and tragic, reality.

Kennebeck, who produced the film alongside Ines Hofman Kanna and documentary legend Errol Morris, has a history of work focused on national security; her 2016 movie National Bird interrogates the drone program through the eyes of pilots and workers and a forthcoming documentary will examine the case of NSA whistleblower Reality Winner. Here’s an edited version of our conversation about DeHart’s story, and how her film helps explain the paranoia, conspiracy theories, and online manipulation of our world. Enemies of the State is available for streaming and in theaters on July 30.

How did you get turned on to the DeHart story?

I was in production for National Bird and one of my sources alerted me to the DeHart case. I started reading some court records but we just very quickly determined this story was way too complex to include in a film about the US drone war. So I finished that film, but I never forgot about the story, because, obviously all these elements: A trip to Mexico, the Russian embassy, and the fact that everyone in the family had served in the military, specifically military intelligence—that really got stuck in my head. So when I was done with National Bird I met with DeHart’s parents.

You structured the film such that facts are introduced, and then new facts come along and complicate the narrative. Essentially, you’re taking viewers on the reporting path journalists go through as they attempt to unwind complicated stories. Why did you choose this approach?

It’s a film about the truth, or how to seek the truth, in a world where we have so much contradicting information and secrets, and narratives that are spreading so quickly over the internet and over social media. We really wanted to take the audience on this journey of investigation with us, and it really mirrors the way that we have been receiving information. The starting point was the DeHart family. We really wanted to establish the story first the way you could find it over the internet. But then it was important for us to introduce the other perspective, which is entirely contradicting to some parts of the DeHart story.

As we went along, with time through the the court motions to uncover additional evidence—and we disclose on the screen at what point we got it—and a lot of it was much later during our investigation. We really wanted to be fair to everyone involved by taking people on the journey that we went on. We had extremely open access to the DeHart family and everyone involved in the case and it was important for us to represent that access.

You talk about two threads that sometimes seemingly contradict each other. By the end of your work, did you find yourself leaning either way?

My team and I, we’ve had and still have so many discussions about this case. We all have slightly different interpretations, but we agree that multiple things can be true at the same time. That’s what I hope that the audience will take away as well. Hollywood films like to have a simplified black and white answer, or someone is the hero or the villain. In reality there are so many more shades of grey.

This film is also a commentary on how information spreads over the internet and social media. I’ve been thinking a lot about conspiracy theories and the making of them. Part of it is because some of them are true. Part of is because there is so much secrecy, including by US government agencies like the FBI. In the secrecy, there are a lot of stories with a lot of not knowing and ambiguity. Some people are very uncomfortable with that. I’m pretty comfortable with it, because I think they are the most true. I absolutely did not want to fill the ambiguity and the not knowing with speculation. I want people to take away the importance of investigative journalism, of critical thinking, that it is worthwhile to continue seeking a truth and reconsider established narratives.

The film essentially has the DeHart family denying the child pornography charges, with authorities in Tennessee and the victims’ families saying the espionage and the national security side of the story was itself a ruse, and an attempt by the DeHart family to evade justice and refuse to accept what he’d done. Are they wrong?

I wanted to start with the DeHarts because that’s how I got to know the story, and that was also the way that people would encounter the story back then over the internet or on the Courage Foundation’s website. And they have space in the film to tell and share their perspective. But, as we got deeper into our research and people began to trust us, we heard a lot of contradictions and an entirely different interpretation. It was important for us to share that as well. Even though they are, from some people’s perspective, complete contradictions.

My personal interpretation is that, there are two cases, clearly. There’s a child pornography case, in Tennessee, and there is an Espionage Act investigation which the FBI was involved in—or there was one; we don’t know if it was ever closed. Everything got muddled up when the FBI was trying to hold him, after Matt DeHart had crossed the border. His mistreatment in the jail, we have documentation of, so that happened. But people are systemically mistreated in American jails and prisons. So it still leaves room for interpretation.

Matt DeHart’s mother, Leann DeHart, says in the film that she’d seen a document that examines potential CIA involvement in the anthrax attacks, which helped her understand why the US government was so zealously going after her son, and then her family. That’s a bombshell claim, and I’m wondering how you approached including it in the film.

That has always been sort of one of the big puzzles for me and my team. We generally start from a position of trust. But then in our work as journalists, we have to do research and try to verify. I think about the different options: Did she see this evidence? Did she see something that she thought was this material? Or does it exist?

It would have been not right to not include this crucial part in the story, but at the same time, I also didn’t want to perpetuate an unproven conspiracy theory. So, the way we put it in is that Leanne says she has seen it with her own eyes, and describes it. And then Gabriella Coleman [an expert on Anonymous, hackers, and government treatment of them] explaining and processing for us what a crucial part this evidence is—but that no one has seen it.

Finally, what does your investigation and the film about the DeHart case tell us about our current times in terms of QAnon, the Trump years, election conspiracies, and how information and disinformation spreads?

This film is my commentary on what we’re dealing with. I remember when I was first reading and researching the story, I was thinking to when I’m on Twitter and social media. You read so much information, but it’s in a condensed form. It’s not sourced. You always have to look who’s posting it, and even if a person who is a reliable journalist, where did they get the information from, and how it’s being spread and simplified. I’ve been struggling with that for a really long time. You can’t do investigative research on every article that you read, you have to have a certain trust. But it’s just getting so much more complicated.

This case represents how a narrative was spread very quickly and kind of got a life of its own. What I wanted to do is show that we went into this with an open investigation where we didn’t know the outcome and we are presenting all the ambiguity and contradictory information for people to decide for themselves with the evidence that we could find and confirm. I hope that people see these meta layers and what the story represents in terms of critical thinking and seeking the truth.

Correction: The introduction has been revised to correct several dates and ages.