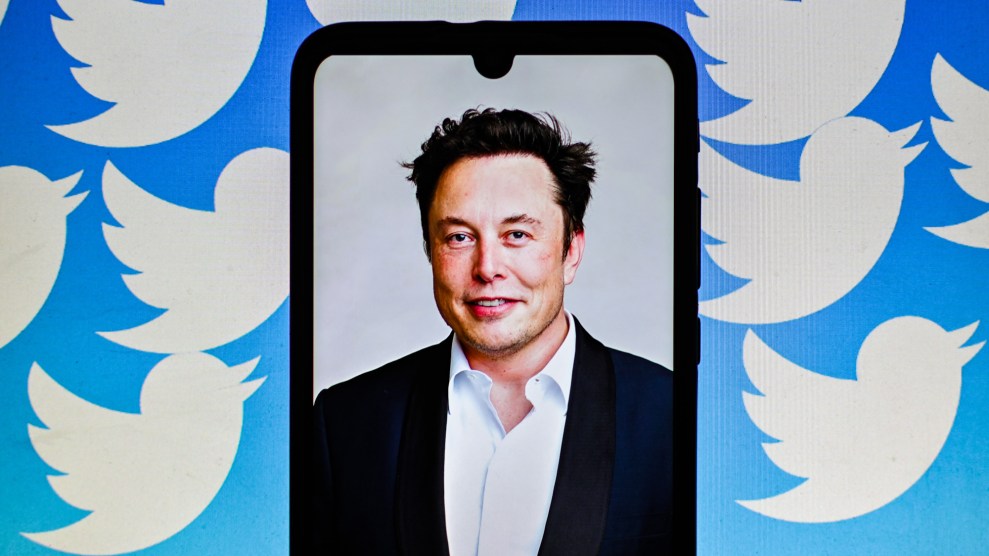 Before his deal to buy Twitter became official, Elon Musk “wanted to reach out personally” to Twitter advertisers by tweeting an open letter to his 12 million followers.

The letter is an appeal. In it, Musk sounds like many who have grown weary of social media. He uses language that, perhaps, you have even used. He warns it is “important for the future to have a common digital town square.” Musk does not mention the idea of said town square being owned by a single company, but he does mention that social media can “splinter into far right and far left wing echo chambers.” These groups “generate more hate and divide our society.”

Maybe I’m a rube for engaging earnestly with a guy who walked into Twitter’s headquarters with a sink to do an in real-life pun, but Musk now owns one of the most important platforms for global discourse so I don’t really have a choice.

His idea of the “echo chamber” here is all wrong.

And Musk’s misconception is one shared by many, across the political spectrum. The ills of the social media echo chamber have been repeated so many times that they are assumed to be fact. Yet researchers have actually had a hard time finding evidence social media produces experiences where we only see information about things we agree with.

As I recently wrote, it is often the other way around:

Political scientist Pablo Barberá found, in a 2015 working paper, that even users who follow mostly like-minded people eventually see increasingly heterogeneous ideological accounts. Other academic papers and studies have discovered that social media and the internet often increase the range of views to which people are exposed.

This just makes sense, intuitively. People of different political stripes are constantly yelling at each other on Twitter.  Since I wrote the above, new research has come out, even further suggesting social media does not fit into the idea of echo chambers.

In his review of the literature on it Petter Törnberg, a researcher at the University of Amsterdam, observed that “research on social media has consistently failed to” find them.

The paper's findings effectively turn the echo chamber on its head: social media polarizes not by isolating us from opposing views, but by making us interact with opposing partisans. They throw us into a partisan war in which we are forced to take sides (@chris_bail) 7/

Divides and polarization certainly do still exist. But what Törnberg found was that people were getting mad and polarized online from their already established offline divides and political dispositions. What is unique is that online the glue of local community—the ties that let people who disagree with each other find common ground—evaporate. “Social conflict is sustainable as long as there are multiple and nonoverlapping lines of disagreement,” Törnberg writes, “we may vote differently, but if we support the same football team or go to the same church, there remains space for interpersonal respect.”

This makes sense. And helps us understand why social media is distinctive. Törnberg concludes that these people who wouldn’t otherwise be engaging with each other are yelling at each other online, exacerbating polarization. “[D]igital media do[es] not isolate us from opposing ideas; au contraire, they bring us to interact with individuals outside our local bubble, and they throw us into a political war, in which we are forced to take sides,” which is at the “core of the rise of partisan sorting,” he writes.

That is the exact opposite of the usual thesis: The idea of filter bubbles, or echo chambers, sowing division.

Twitter is instead the equivalent of putting an anarchist crust-punk from Seattle into the same room as a Kappa Alpha alum from Auburn and watching them talk about politics all day. Of course, they would probably rip each other’s heads off. Now, imagine watching a thousand versions of that all day. It would make you think the world is crazy. There’s your issue.

It’s worth pausing though and asking why the idea of the “echo chamber” is so appealing, both to Musk and the op-ed columnists who constantly evoke it. As I concluded last time I wrote about the false idea, I think it’s an evasion.

“Echo chamber” is a meta-­critique. It does not engage with the actual merits or flaws of an argument. Other people are simply deluded reactionaries duped by Facebook. But while privately owned social media companies can influence us, they’re hardly the only things that do. Our core ideologies and values are determined by everything from where we grew up to whom we love, to the actual impact of politics on our lives. Fixing Facebook wouldn’t solve the problem of many echo chambers—your family’s opinions, your friend’s bigoted talking points—even if it’s a good idea.

In a way, those who worry about echo chambers are too hopeful. Many voters really do want Trump, Brexit, and other things that liberals abhor. A lot of people do not care, deep down, about democracy. Better information might not be a panacea for that, even if it would slow down a conspiracy theory like QAnon.

For Musk, and for others, talking about echo chambers assumes a fix to a fake problem and allows them to avoid actually talking about real ones.

I personally think it’s more complicated than Törnberg presents, too. Much of these issues are, at least partially, born of precarity. This isn’t just a hunch. Joanna J Bryson, a professor at the Hertie School in Berlin replied to Törnberg with her own paper that found that polarization correlates with increases in inequality and economic decline. With few avenues to make their lives better, people take to posting online—a small attempt at control.

I don’t know what Musk’s actual motives are in buying Twitter. I don’t even know if he even believes his “echo chamber” argument. I do know that evoking the “echo chamber,” and promising to banish it, solves nothing.