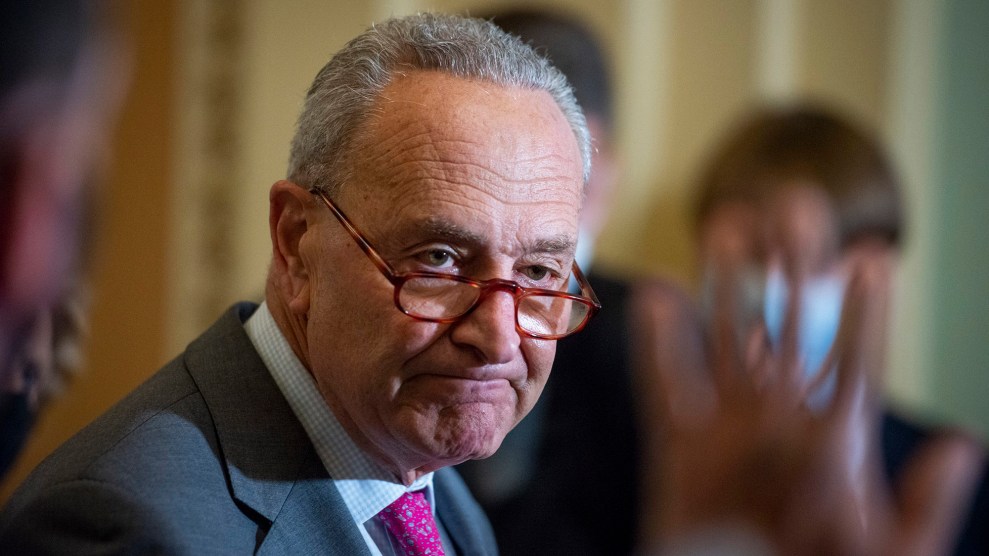 The Senate passed an infrastructure bill on Tuesday morning that would invest $1 trillion to rebuild the country’s aging utilities and transportation systems. The bill was backed by every Senate Democrat, and gained support from 19 Republicans. The passage ends months of rocky negotiations between a bipartisan group of senators and delivers a victory to President Joe Biden, who campaigned on restoring the art of bipartisan dealmaking to the Oval Office.

But the road to enacting Biden’s economic vision is far from over. The bill’s passage in the Senate merely sends it over to the House, kicking off what promises to be a long, tempestuous process that will test Democrats’ narrow majorities in both chambers of Congress—and ultimately determine just how ambitious Biden’s promised economic transformation will be.

The bill sets aside money to repair roads and bridges, replace remaining lead pipes, reinvigorate mass transit, and boost electric vehicles. It also would invest in new public works projects, such as a network of electric car charging stations and a massive expansion of the nation’s broadband access. The slate of projected work is expected to create millions of new jobs over the next decade. The legislation marks the largest investment in public works in nearly a decade, but it still falls far short of the $4 trillion economic vision the White House proposed earlier this year. The eventual bipartisan deal proved particularly disappointing to progressive lawmakers, who already viewed the White House’s initial proposals as a down payment on the massive investments they deem necessary to remedy the nation’s crises.

Congress’ left flank bit their typically unreserved tongues early in the first weeks of the bipartisan talks, an effort to “give a little space” to negotiations because “we understand there are some Senate Democrats who need to see that,” Congressional Progressive Caucus Chair Rep. Pramila Jayapal (D-Wash.) told me in June. But as months wore on, patience wore thin. Anxiety reached a pitch last month as early details of the bipartisan senators’ framework trickled out. Key Democratic priorities would be significantly downsized in the Senate’s deal—and progressive priorities would be all but absent.

Such cuts were necessary to attract support from both sides of the Senate’s evenly divided aisles, but could cause problems in the House, where Speaker Nancy Pelosi (D-Calif.) oversees her own narrow majority. When the deal was first announced, Pelosi promised that her chamber would only put the infrastructure proposal to a vote if it is accompanied by a budget reconciliation bill—legislation that only requires a simple majority to pass in the Senate and can therefore pass with only Democratic votes. It would thus serve as the vehicle for whatever eligible pieces of her party’s agenda that had fallen to the cutting room floor.

And that’s where the turbulent next phase begins. Much of the attention over the following weeks will turn to the $3.5 trillion reconciliation bill, which offers Democrats their best hope for salvaging what they can of the ambitious agenda Biden put forth earlier this year. “Progressives don’t give a fuck about the bipartisan deal,” one aide to a progressive House member tells me, emphasizing that the left flank will be agitating for more spending for key social investments—such as major investments in environmental justice and home care for the disabled and elderly.

The White House is highly attuned to its fragile majority, and has taken care to assuage concerns from all facets of the House’s ideologically diverse caucus—including progressives, who have become increasingly vocal in their threats to tank deals they deem insufficient. “While there may be a couple of senators that are saying that they’re going to vote ‘no’ if certain things don’t happen, that is also true of any number of members in the House,” Jayapal told reporters last Tuesday.

But centrist lawmakers have their own complaints. Rep. Josh Gotteheimer, the leader of the centrist Problem Solvers Caucus, told the New York Times that Pelosi “should bring this once-in-a-century bipartisan legislation to the floor for a stand-alone vote as quickly as possible.” Moderate Democrats are less enthusiastic about the massive spending the left is thirsting for in its Democrats-only bill, and the failure to deliver a timely bipartisan package will be its own source of anger for that faction as the midterms loom. Gotteheimer and five of his fellow House moderates formalized that opinion in a new letter that demands the speaker hold a vote on the bipartisan infrastructure bill “as soon as the Senate completes its work.” At least two centrist House lawmakers have said they won’t vote for any Democrat-only reconciliation bill at all.

It is finally, at long last, Infrastructure Week, and the Senate has defeated the odds to drag a massive, bipartisan investment over the finish line. But there’s no guarantee that this process has a happy ending. If not, Biden’s and Democrats’ legacies are on the line.