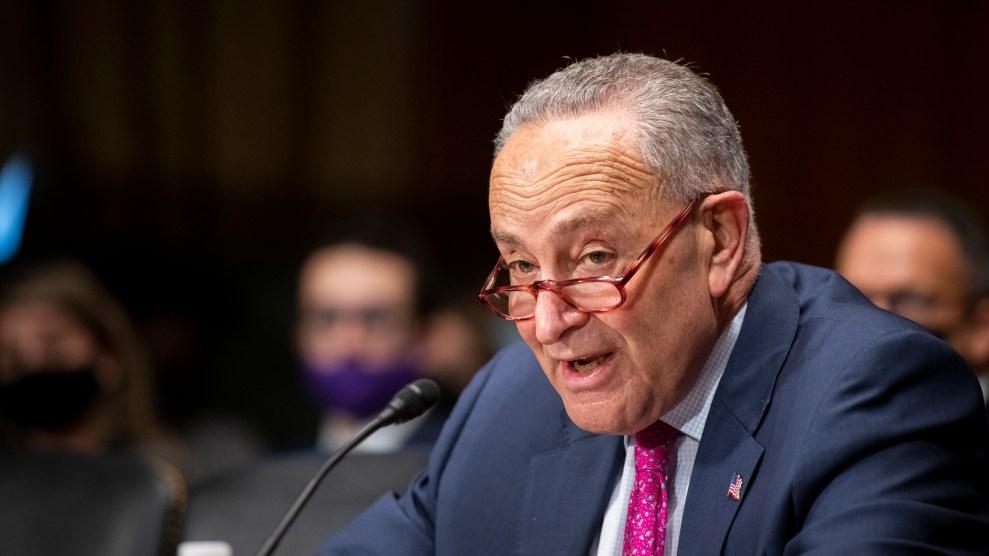 On the anniversary of the January 6 attack on the Capitol, Senate Majority Leader Chuck Schumer called on the Senate to pass voting rights reform legislation to ensure “that our country’s destiny is determined by the voice of the people, and not by the violent whims of lies.”

Schumer warned that Donald Trump, and others who have attempted to downplay the severity of last year’s events, pose a threat to the Republic. “Democracy could—God forbid, God forbid, horror of horrors—vanish,” he said from the Senate floor.

The speech was tinged with the personal, too. Schumer recalled a police officer grabbing him by the collar and ushering him into a safe room, but not before he passed within 30 feet of the rioters. “I was told later that one of them reportedly said, ‘There’s the big Jew, let’s get him,'” he said.

.@SenSchumer: "The warnings of history are clear. When democracies are in danger, it often starts with a mob. That's what happened a year ago here in this building, a mob attack." pic.twitter.com/o500UMLw6T

“January 6 was an attempt to reverse, through violent means, the outcome of a free and fair election,” he said. “An insurrection, call it what it is.”

And it’s not something that we can just move past, he said, because its effects are ongoing. He pointed out that a minority of Americans—but a majority of Republican voters—believe Trump won and that the 2020 election was rigged. “What if a majority of this country, because of these pernicious actions, start believing it?” he said. “I can’t predict the details, but I can predict that it will diminish the greatness of this country in small and even large ways.”

The only way to move forward, he said, is to remember what happened that day and pass legislation to ensure that it never happens again. Schumer called Senate Minority Leader Mitch McConnell’s suggestion of reforming the Electoral Count Act “the bare minimum” and insisted instead that Congress pass the sweeping John Lewis Voting Rights Advancement Act and the Freedom to Vote Act. He didn’t mention, however, that passing those laws would require Sens. Joe Manchin (D-W.V.) and Kyrsten Sinema (D-Ariz.) to throw their weight behind filibuster reform, which seems increasingly unlikely. (Schumer is plenty aware that the filibuster can have political benefits; along with Senate Democrats in the early 2000s, he used it against President George W. Bush’s judicial nominees in a way that, some argue, laid the groundwork for its unhinged use by Republicans now.)

“Let the anniversary of January 6 forever serve as a reminder that the march to perfect our democracy is never over,” he said, “that our democracy is a precious, sometimes fragile gift, purchased by those who struggled before us, and that all of us now must do our part to keep the American vision going in the present and into the future.”