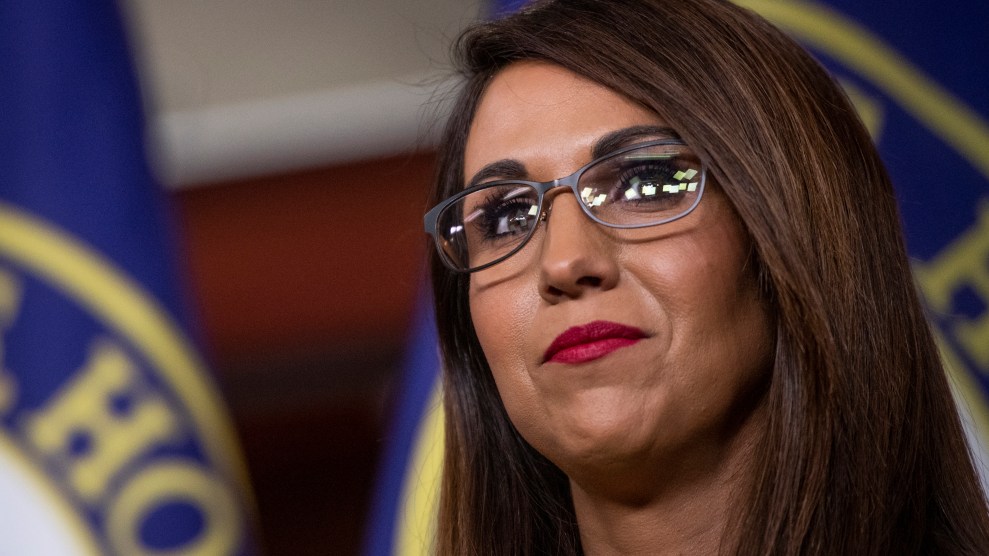 The political action committee that helped bring down Rep. Madison Cawthorn (R-N.C.) has released a series of salacious and likely false accusations against Rep. Lauren Boebert (R-Colo.)—and online liberals are eating it right up. But if the Cawthorn allegations, which centered around an explicit video, were fueled by homophobia, then the Boebert allegations are being fueled by a no less pernicious force: misogyny.

Several news sites in recent days have breathlessly amplified claims that Boebert had two abortions while working as a paid escort, a small news cycle that’s prompting loud accusations of hypocrisy from the blue-wave Twitter crowd. To be sure, these outlets have published unverified claims from a politically motivated organization as if they were facts, all in pretty clear violation of good journalistic practice. These claims come from a heavily redacted set of anonymous text messages sent to a member of the American Muckrakers PAC, without corroboration. And, as Will Sommer of the Daily Beast points out, one of the photos that the source characterized as being of Boebert is actually of another woman entirely—not exactly the mark of a trustworthy tipster.

Last month, I published a feature on Boebert, for which I interviewed many people who personally knew her. I had to sift through a lot of unverifiable information before deciding what to publish online. There was really no need for rumor-mongering about Boebert; the truth was dramatic enough. We know that Boebert was present on the night that a man exposed himself to two teenage girls at a bowling alley—then went on to marry him. We know that she denied responsibility for selling tainted pork sliders that had sickened 80 people at a local rodeo. And we know, as I reported, that she consistently failed to pay employees at her restaurant, Shooters Grill.

A lot of the criticism of Boebert is warranted, but she doesn’t deserve to be the victim of sexist tropes. After my story on Boebert was published, many self-professed liberals used misogynistic language to describe her. One commenter called her a “batshit crazy woman.” A Twitter user replied to the article link with the word “Skank!!!” A recent Reddit thread related to a follow-up post contained some comments too obscene to post here.

In promoting the explicit video of Cawthorn and pushing unverified abortion allegations against Boebert, the American Muckrakers claim that they’re demonstrating political hypocrisy. Cawthorn, the PAC’s co-founder said, deserved to be outed as having dressed in drag and made homoerotic jokes with his friends because he “holds himself to be above everybody.” But the group’s attempt at exposing hypocrisy really came off as a cynical play on voters’ homophobia. Sure, one could call Boebert a hypocrite for allegedly having abortions despite publicly opposing them. But accusing Boebert of having done sex work and gotten abortions involves an obvious layer of contempt, of shaming a woman for things that she shouldn’t have to be ashamed of—especially when there’s no shortage of actually shameful things to talk about.

Keep in mind that Boebert once referred to her colleague Rep. Ilhan Omar (D-Minn.) as the “jihad squad.” If the public outcry over her explicitly hateful comments wasn’t enough to get her to tone it down, I doubt the label of “hypocrite” will do the trick.