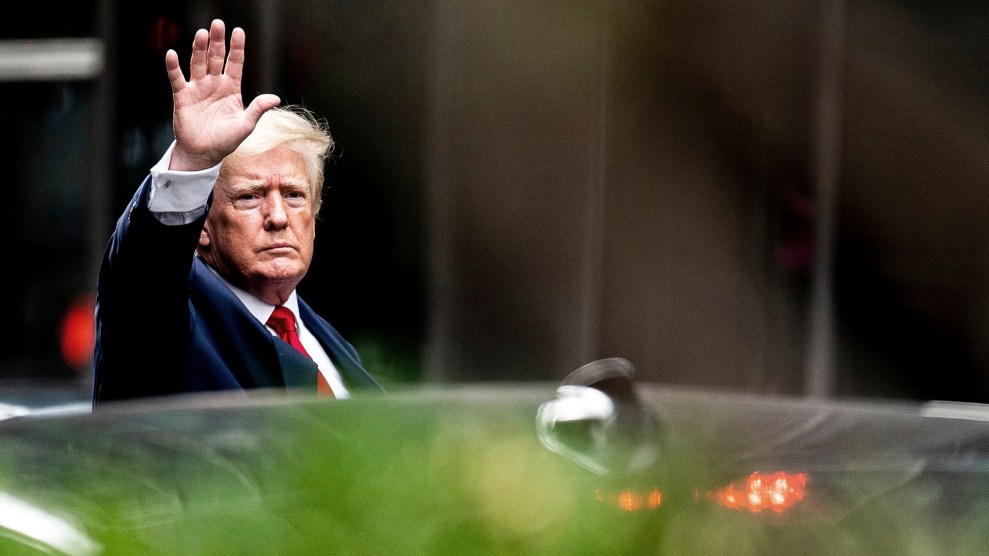 Former President Donald Trump waves as he departs Trump Tower, Wednesday, Aug. 10, 2022, in New York, on his way to the New York attorney general's office for a deposition in a civil investigation.Julia Nikhinson/AP

In the days since the FBI raided former President Donald Trump’s home, the Palm Beach club Mar-a-Lago, Republicans have treated it as the tyrannical act of an out-of-control Democratic administration, conspiratorial social media spaces have hummed with talk of revolution, and an armed Ohio man was killed trying to enter an FBI field office. But it’s only in the last day that the why behind all of this drama began to come to light.

For several days, the press wondered what kind of document recovery had prompted a raid on a former president’s home. On Thursday night, the Washington Post reported that the FBI was looking for documents related to nuclear weapons. Trump, the Justice Department believed, might be keeping documents that are critical to national security and classified at the highest level, in violation of the law. “If the FBI and the Department of Justice believed there were top secret materials still at Mar-a-Lago, that would lend itself to greater ‘hair-on-fire’ motivation to recover that material as quickly as possible,” David Laufman, a former head of the Justice Department’s counterintelligence section told the Post. Trump responded Friday morning, calling the reports about nuclear weapons documents a “hoax.”

On Thursday, the Justice Department responded to the outcry from the right by asking the court overseeing the matter to release the warrant used to execute the raid, if Trump agreed. Trump announced on his social media site, Truth Social, that he would not oppose its release. But that’s not a formal agreement. Trump has until 3 p.m. on Friday to officially tell the court overseeing the case to release the warrant.

Meanwhile, Republicans are testing various strategies for how to respond to the revelations. Some have decided to downplay the seriousness of keeping nuclear documents. “It depends on what the nuclear information is,” said Rep. Mike Turner (R-Ohio), the top Republican on the House Intelligence Committee. Along similar lines, the conservative writer Rich Lowry intimated that stealing some classified nuclear information and refusing to return it would not merit a federal raid. “Given the track record of these people, it better prove to have been the blueprint of hypersonic missile, or something similar,” he tweeted. At least one of Trump’s allies has defended Trump by claiming that Trump had declassified the documents, though Trump could not have unilaterally declassified some nuclear information.

And then there’s Missouri Sen. Josh Hawley, who told reporters Friday morning that “there needs to be real accountability here”—not for Trump, of course, but for Attorney General Merrick Garland, whom Hawley said should be impeached and removed from office.