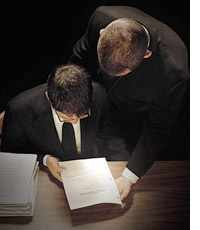 On August 7, thousands of state legislators and corporate lobbyists were scheduled to descend on Orlando, Florida, for the annual meeting of the American Legislative Exchange Council, or ALEC. There, they could play golf, listen to speeches by Secretary of Education Rod Paige and Secretary of Labor Elaine Chao, and attend the Thomas Jefferson Freedom Award Banquet, raising a glass to limited government. Those able to resist the lure of Epcot and Gatorland could also attend sessions on “free market” reforms designed to minimize government’s role in health care and curb lawsuits by consumers. And all the while, state representatives and business lobbyists would engage in what ALEC calls an “exchange of ideas” about public policy.

But that exchange didn’t end when the conferees returned to their home states. With more than 2,400 state lawmakers as members—roughly one third of the nation’s total—ALEC is a year-round clearinghouse for business-friendly legislation. Its nine task forces, each composed of legislators and representatives from private industry, sit down together to draft model bills on issues ranging from agriculture to school vouchers, which are then introduced in state legislatures across the country.

Though it calls itself “the nation’s largest bipartisan, individual membership association of state legislators,” ALEC might better be described as one of the nation’s most powerful—and least known—corporate lobbies. While other lobbyists focus on the federal government, ALEC gives business a direct hand in writing bills that are considered in state assemblies nationwide. Funded primarily by large corporations, industry groups, and conservative foundations—including R.J. Reynolds, Koch Industries, and the American Petroleum Institute—the group takes a chain-restaurant approach to public policy, supplying precooked McBills to state lawmakers. Since most legislators are in session only part of the year and often have no staff to do independent research, they’re quick to swallow what ALEC serves up. In 2000, according to the council, members introduced more than 3,100 bills based on its models, passing 450 into law.

Not surprisingly, many of the bills benefit the companies that helped write them. Consider ALEC’s “Environmental Audit Privilege,” a measure that relieves companies of legal responsibility for their own pollution. The bill got its start in 1992, when Colorado regulators fined the Coors Brewing Company for smog-inducing air emissions at several plants. ALEC was quick to respond, drafting a measure to prevent firms from being fined if they report environmental violations at their facilities, and to keep such disclosures secret. Coors is a corporate member of ALEC, and company executive Allan Auger is a past chairman of the group, to which the Coors family’s Castle Rock Foundation is also a donor. Last year, Kentucky and Oregon passed audit-privilege laws like the one drawn up by ALEC.

“It gives you an opportunity to sit down at the same table with all of the companies in the private sector and discuss issues that affect the public,” says a Texas Republican lawmaker. “It’s very helpful.”

In another instance of profitable policymaking, ALEC drafted a model “truth in sentencing” bill that restricts parole eligibility for prisoners, keeping inmates locked up longer. One of the members of the task force that drafted the bill was Corrections Corporation of America, the nation’s largest private prison company, which stands to cash in on longer sentences. By the late 1990s, similar sentencing measures had passed in 40 states. “There was never any mention that ALEC or anybody else had any involvement in this,” Walter Dickey, the former head of Wisconsin’s prison system, told reporters after his state passed a version of the measure.

Many lawmakers welcome the chance to draft such legislation with corporate executives. “It gives you an opportunity to sit down at the same table with all of the companies in the private sector and discuss issues that affect the public,” says Bill Carter, a Republican state representative in Texas who has belonged to the organization for more than a decade. “It’s very helpful.”

But critics charge that the group allows corporations to write public policy in secret. “Where we have trouble with ALEC is the fact that it operates in a very behind-the-scenes fashion,” says Brad DeVries of the nonprofit Defenders of Wildlife. “It brings together some of the most powerful corporate interests to sit down and write legislation, which is then offered around the country without their fingerprints on it.”

Indeed, lawmakers sometimes have no idea that they are voting on bills that have been drafted by industry. Fred Bosse, a Democrat in the Texas House, says he discovered ALEC’s pro-business bias when he attended one of the group’s conferences. “I saw that one of the talks was on the greenhouse effect, which was one of the issues I’ve always been interested in,” he recalls. “There was this professor from someplace, and the theme of his talk was that the greenhouse effect is nothing but a scam being advanced by environmental terrorists to destroy business in America.”

In a report issued earlier this year, Defenders of Wildlife and the Natural Resources Defense Council denounced ALEC as a vehicle for corporations to buy access to state legislatures—often with a little help from taxpayers, who in many states foot the travel bill for legislators who attend ALEC meetings. The report found that the group’s corporate donors—some of whom pay membership dues of $50,000 a year—have included Philip Morris, Amoco, Chevron, Enron, and the American Energy Institute. ALEC enjoys what it calls an “impressive presence” among the leadership of state legislatures, with a membership that includes speakers, presidents, and majority and minority leaders in 22 senates and 30 houses. The group’s alumni also include nine governors and more than 80 members of Congress, among them House Speaker Dennis Hastert and Majority Whip Tom DeLay. The council wasn’t always so dominated by business interests. Founded in 1973 by conservative activist Paul Weyrich and a handful of state legislators, ALEC initially positioned itself as a counterweight to liberal foundations and think tanks, focusing on social issues like abortion and the Equal Rights Amendment. It wasn’t until the late 1980s that ALEC shifted its emphasis to drawing up bills that benefit industry. Now the group seeks to “espouse Jeffersonian, free-market principles in the process of formulating innovative policy ideas and solutions,” says ALEC spokesman Joseph Rinzel.

What troubles critics of ALEC, though, is the way those ideas are intentionally divorced from their source. “People can push different ideas,” says DeVries. “But the system only works when we know who’s behind them.”