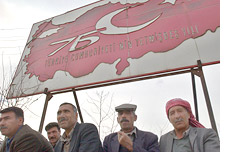 Over the past few days I have seen the hearts and minds of the people in southeastern Turkey turn against the United States. Before the bombing started, it was clear that nearly everyone I met was opposed to the war, but there was also a nearly unanimous belief that Saddam Hussein needed to be removed from power, and that perhaps the United States and Great Britain were the only countries willing and able to accomplish the task.

This part of Turkey is predominantly Kurdish, and Saddam is responsible for the death and suffering of many thousands of Kurds in northern Iraq — by the 1988 chemical gassing of the people Halabjah, by brutal execution, and by forced relocation. Nevertheless, many Kurdish people told me that they fear the Turkish military more than they fear Saddam, and they hoped that if and when the U.S. military entered the region, the Kurd’s human rights and economy would be much improved.

Before the war began, the conversations I had with Kurdish people typically would start with one man inviting me to sit down and drink some tea and smoke some cigarettes. Soon four or five of his friends would crowd around, and I’d find myself answering more questions than I asked. The main thing they wanted to know was, basically, what the fuck is going on with this war? I’d tell them that I thought there was a secret, something that Bush and Blair couldn’t talk about until the bombing started, like a missing piece to a puzzle that, once it was revealed, would explain everything. They’d listen to me and try to believe what I was saying because I was an American and knew much more about these things than they did.

They’d ask me if the U.S. would support an independent Kurdistan, and I’d say probably not, that it would cause too much trouble with Turkey and the other neighboring states. This answer always made them very sad, like little kids being told that there would be no Christmas this year, but they would choke it down and accept it. They still wanted to be my friend. They still brought more tea, more cigarettes, and asked more questions. Inevitably the conversation would begin to taper off with this request: Sir, can you help me get a green card? I very much want to go to America.

It was like their ship was sinking, and I was the only lifeboat around.

No, I’d say, I’m sorry. The boat is full, you’ll have to stay here and drown. And still they brought more tea, more cigarettes, anything to make me feel at home.

But after the bombing started, the worm turned. We were counting on struggling masses yearning to breathe free, but video of the bombs hitting Baghdad, the video of crying children, the reports of dead civilians…these have been played over and over, sometimes with sentimental Enya-like music, and it’s just been too much for the people here. They are Kurds and their identity is linked to their Kurdish culture, but, apparently, their religious identity is stronger than this. Our attack on Iraq is being seen as an attack on their Muslim brothers and sisters. It has become a religious war, and Saddam Hussein is now being called a hero, even among the Kurds. In fact, the war has given the Kurds and the Turks a common ground, perhaps the first time they’ve ever agreed on anything.

It seems we’ve blown it, again, by not understanding the Muslim mind. We thought the Iraqis would run towards our troops waving white flags, but instead they seem to be willing to die as martyrs. No one offers to talk to me now. No one offers tea and cigarettes. I’ve been told to say that I am Dutch or Australian, anything but an American.

Ah-may-ree-ka. The word is now joined with the Turkish word for war — Savas — pronounced with a hiss, ssha-vasssh.