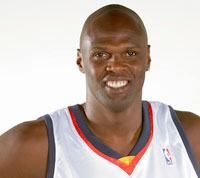 Basketball fans know Adonal Foyle as a center for the Golden State Warriors, where the former first-round pick is in his eighth season and recently became the team’s all-time leader in blocked shots. But he’s also won his share of fans for his activism away from the court, thanks to his efforts to get college students involved in reforming America’s campaign-finance system.

During his years at Colgate University in the 1990s, Foyle explains, he saw a student body ready to become more actively engaged in politics — provided students felt they had a voice. So in 2001, he launched Democracy Matters, a non-profit organization that now has chapters on more than 80 college campuses. “When I was in college, people were saying that my generation is apathetic,” says Foyle, now 29. “But I found that wasn’t really the case. They were out working in soup kitchens, working with Habitat for Humanity, so clearly they weren’t apathetic.” The challenge then, Foyle says, was to get these students more involved in the political realm. With the issue of campaign finance, he’s hit upon a way to do that. “Fundamentally, if they’re going to participate in the system, they need the system to be fixed, and campaign-finance reform seemed to be the perfect link.”

Foyle shares credit for his activism with his adoptive parents, Colgate professors Joan and Jay Mandle, with whom he co-founded Democracy Matters. Foyle, who grew up without running water or electricity on the tiny Caribbean island of Canouan in St. Vincent and the Grenadines, met the Mandles at a basketball tournament there in 1990, and came to the U.S. with their sponsorship. When the Warriors drafted Foyle in 1997, the Mandles moved to the San Francisco Bay area. There, Joan Mandle helped organize local coalitions that passed public financing of local elections for the city of Oakland, and later for San Francisco. “It was kind of our dinnertime conversation,” Foyle says, laughing. “Somewhere in the process, we decided ‘isn’t it a shame that more young people are not involved with this?’”

Democracy Matters started with a pilot program at Colgate in 2000, working with students there to organize at the grassroots level and teach others about the influence of money in politics. The students’ early activities included activism standbys like putting up fliers, chalking, and hosting teach-ins, plus educational efforts like guerrilla theater presentations and visits to area high schools. “It was extremely successful at teaching a bunch of kids how to do grassroots organizing, giving them the skills and resources they needed and raising the issue of money in politics on campus,” says Joan Mandle, who left Colgate to become Democracy Matters’ full-time executive director in 2001. “It was quite empowering for them, and I think they began to see politics in a slightly different way than they had before — that you don’t have to be a full-time activist, but there’s still a lot you can do.”

Democracy Matters has now spread to a list of schools that includes community colleges, historically black colleges and commuter campuses in addition to state universities and Ivy League institutions. That diversity is reflected in the organization’s decentralized structure, with coordinators at each campus given responsibility for crafting activities there. “We don’t like to have a top-down approach,” says Alex Cole, who as a student started the chapter at Vassar College in 2001, and now serves as Democracy Matters’ West Coast field coordinator, working with more than 20 campuses. “We like to work with each chapter, each leader there, individually to plot out a plan of how best to organize their campus, how best to raise the issue of money in politics for their campus.”

Some recent examples include: a “Guess Who Owns the President?” event at the University of Puget Sound, in which “game show” contestants learned about top political donors in order to win prizes; a Vassar event where students had to pass a clean-elections quiz in order to get into a free party; and a “Rock the Vote” concert at Sacramento State where students registered voters and brought in elected officials to speak about campaign-finance reform. Students from various chapters also meet up at regional and national Democracy Matters summits, where they can share experiences and plan coordinated events.

Of course, students’ efforts are hardly confined to campus. This year, a Democracy Matters member at the University of California got “Measure H,” an initiative calling for public financing of local elections, on the ballot in Berkeley, Calif. (though voters ultimately didn’t pass the measure). Students in Arizona are working on education efforts to counter expected challenges to that state’s Clean Elections policy, which provides public funds to candidates who refuse corporate or special-interest money. Several New York chapters have teamed up to annually lobby the state legislature in Albany on behalf of public financing, and chapters in California, Massachusetts and New Hampshire followed with similar day-of-lobbying efforts.

“As an organization, at this point we have to take anything we can get with public financing,” Foyle says. “But in the end, we want full public financing of elections. If we think democracy’s the most sacred part of our country, we should spend what’s necessary to protect the integrity of that system. Democracy’s what we try to export to the rest of the world; hopefully, we won’t let it get hijacked at home.”

As for his activism, Foyle hopes to keep expanding the organization to new campuses, keep students energized now that the election cycle has ended, and keep organizing voters in support of clean-election initiatives at the local and state level. “This is the mother of all democracies, and our democracy is in serious question right now because of the way our campaigns are funded in this country,” he says. “There is something fundamentally wrong when people listen to the corporations instead of their constituencies. They’re worried about re-election and raising money, so they’re not dealing with the issues. So there’s no way you can go on without dealing with that fundamental rift in our democracy right now.”