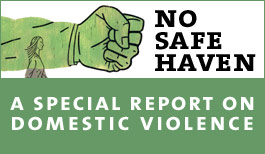 No Safe Haven
In the coming months, Congress and the Supreme Court will signal whether we are advancing in our fight against domestic violence, or in retreat

The Unforgiven
By Jennifer Gonnerman
Shelley Hendrickson killed her abusive husband and went to jail. Then an old friend began a campaign to free her — and 10 other women.

The Counselor
By Sara Catania
Patricia Prickett set out to beat the violence and ended up in the belly of the beast, working with the LAPD.

A New Order in the Court

Domestic Violence: The Numbers
(Sources)
Resources for Getting Involved