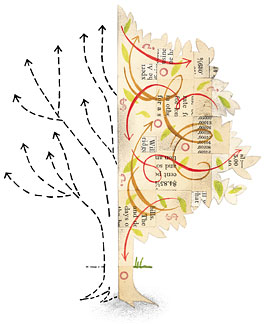 In today’s great God-versus-Science debate, both sides maneuver for the middle ground. Though he’s otherwise tolerant of nothing, George W. Bush calls for evolution and Intelligent Design to be taught together in the science classes of public schools. Meanwhile, our great gray citadel of secular humanism, the New York Times, finds it comforting to tell us (on the front page on August 23) that there really are good Christian scientists out there who do evolution on weekdays and church on Sunday. So what’s the problem?

In his wonderful book on American pragmatism, The Metaphysical Club, Louis Menand explains what the problem is. God and science really don’t mix. Darwin didn’t invent evolution. He invented Godless Evolution. Menand writes: “On the Origin of Species was published on November 24, 1859. The word ‘evolution’ barely appears in it. Many scientists by 1859 were evolutionists—that is, they believed that species had not been created once and for all, but had changed over time…. The purpose of On the Origin of Species was not to introduce the concept of evolution; it was to debunk the concept of supernatural intelligence—the idea that the universe is the result of an idea.”

Before Darwin, when scientists gazed on the natural world, they imposed categories on it: order, families, genera, species, with Homo sapiens sapiens coming out on top. Evolution meant progress; order and progress were signs of God’s plan. Darwin shifted the focus to individuals, to mutation, and to the processes of natural, sexual, and social selection. Order now recedes. Variations are key, and they occur entirely by chance. God is left out. “What was radical about On the Origin of Species,” Menand writes, “was not its evolutionism, but its materialism.”

Economists, on the other hand, have been Intelligent Designers since the beginning. Adam Smith was a deist; he believed in a world governed by a benevolent system of natural law. Consider this familiar passage from Wealth of Nations, published in 1776, with its now mostly forgotten anti-globalization flavor:

“By preferring the support of domestic to that of foreign industry [every individual] intends only his own security; and by directing that industry in such a manner as its produce may be of the greatest value, he intends only his own gain, and he is in this, as in many other cases, led by an invisible hand to promote an end which was no part of his intention…. By pursuing his own interest he frequently promotes that of the society more effectually than when he really intends to promote it.”

Smith’s Creator did not interfere. He simply wrote the laws and left them for events to demonstrate and man to discover. The greatest American economist, Thorstein Veblen, observed that “the guidance of…the invisible hand takes place…through a comprehensive scheme of contrivances established from the beginning.” What is this if not Intelligent Design?

But to Veblen this was, precisely, unscientific. And so he made a mighty effort back in 1898 to move economics into the Darwinian age. In a magnificent essay entitled “Why Is Economics Not an Evolutionary Science?” Veblen pointed out the problems of classical economics: too much preoccupied with classification schemes and higher purposes, too little with material process and “cumulative or unfolding sequence.” Economics could become a science, but only if it detached itself from the idea that change intrinsically led to improvement.

Yet economists resisted Veblen’s message. Sentences like this one—though my favorite in all economics—might possibly help explain why he didn’t quite get through: “If we are getting restless under the taxonomy of a monocotyledonous wage doctrine and a cryptogamic theory of interest, with involute, loculicidal, tomentous and moniliform variants, what is the cytoplasm, centrosome or karyokinetic process to which we may turn, and in which we may find surcease from the metaphysics of normality and controlling principles?”

More than a century later, economics has not escaped its pre-Darwinian rut. Economists still don’t understand variation; instead they write maddeningly about “representative agents” and “rational economic man.” They still teach the “marginal product theory of wages,” which excuses every gross inequality faced by the laboring poor. Alan Greenspan even recently resurrected the idea of a “natural rate of interest” to justify raising rates, though that doctrine had been extinct for 70 years. Economists still ignore the diversity of actual economic and social life. They say little about forms of ownership and the distribution of power, and almost nothing about how pointless product differentiation and technical change now shape and drive the struggle for survival among firms.

Metaphysics still persists in economics. It takes the form of “competitive equilibrium”—the conditions under which selfish individuals and tiny small businesses in free competitive markets interact to produce the best results for social welfare. Competitive equilibrium is a state of perpetual economic stagnation, its study an exercise in mental stasis. This is because there is nothing to study: The idea dominates textbooks and journals but has never existed in real life.

In each generation since Veblen, some economists have fought for evolutionary ideas, but the ID types keep coming back. Today their most lethal champions call themselves the “School of Law and Economics.” This group holds that markets are self-policing, that fraud is really impossible except where publicly provided insurance creates “moral hazard.” Get rid of regulations, they believe, and we won’t much need the SEC, the FTC, and the Justice Department to protect us from Enron, Tyco, and WorldCom. Now that John Roberts has taken over at the Supreme Court, we’ll see how this touching faith works out.

Modern economics resembles religion in other, more prosaic ways. The American Economic Association (AEA) runs like a priesthood; its flagship Review is as unreadable as a Dead Sea Scroll. And when heretics gather in the Association for Evolutionary Economics and elsewhere, Inquisitors keep after them. (At the annual academic meetings, the AEA sends seat counters to the heretical sessions, looking for groups small enough to cut from its rolls.) To borrow an old line from Robert Kuttner, the evolutionists are “a tiny and despised sect that stubbornly refuses to disappear.”

Yet we’re a threat. For Darwin cannot be erased; his material, randomized, godless view of change informs every aspect of the way real scientists investigate physical, biological, and social problems, from cosmology to the study of political or technological change. The new mathematics of chaos and complexity are evolutionary, for they study how simple determinate processes can give rise to lifelike diversity. These techniques yield many new insights into the origins of pattern and structure. (For a fun example, download John Conway’s “Game of Life” and have a look at what it can do.) One day, they may break through even in economics, and Veblen’s long-delayed evolutionary revolution will be complete.

Evolutionism, in the Darwinian form that cannot be reconciled to God’s design or even to the Invisible Hand, remains a pure—if I were religious I would say sublime—product of free human thought. Religion has other virtues, but it isn’t, generally speaking, a domain of free inquiry. And you cannot relabel a quasi-religious doctrine as “science” and thereby make it free. That is why Intelligent Design in biology and the Invisible Hand in economics must have well-heeled foundations to promote them, while Darwinian evolution grows up everywhere on its own.

And so, the real issue facing the United States in this matter is quite simple: Do we want free human thought to continue to flourish here? Or do we want to suppress it? If we choose the latter, rest assured, free thought, the future of science, and also the future of economics will eventually crop up somewhere else. Evolution promises us: If a niche appears, sooner or later something will come along to inhabit it.

And as for the raw merits of the debate, consider this easy proof of evolution’s explanatory power. Intelligent Design cannot explain Darwinian evolution. Darwin’s whole point is that variation and change are random and without higher purpose. We cannot imagine that God designed the disproof of his own existence.

But can evolution explain Intelligent Design? Easily. After all, it was less than a century back—when William Jennings Bryan prosecuted (and Clarence Darrow defended) the Scopes case—that the fundamentalists Bryan represented demanded that only a literal biblical account of creation be taught in public schools. They didn’t want evolution taught at all. Bryan won in court, but in the schools Darrow and Darwin ultimately prevailed.

And what is Intelligent Design, now seeking its niche in a culture conditioned by tolerant and pliable minds, which pretends to want a peaceable coexistence with evolution rather than to supplant it? What is it indeed, if not the mutant offspring of creationism, born into the world that evolution made?
It’s a political adaptation. Q.E.D.